The New York That Wasn't (But Might Have Been), part II

Before showing an illustration of a Manhattan as it might have grown in the absence of a single central plan, it's worth considering for a moment how it was that the plan that the Commissioners drew up actually came to be, in spite of the extensive network of roads that already covered Manhattan in 1807.  Answers are difficult to come by, as the Commissioners' very brief account of their decision-making process raises nearly as many questions as it answers.


The Commissioners did, however, claim that they had attempted to follow existing streets and property lines:

"Having determined, therefore, that the work in general should be rectangular, a second, and, in their opinion, an important consideration was so to amalgamate it with the plans already adopted by individuals as not to make any important changes in their dispositions.  ... This, if it could have been effected consistently with the public interest, was desirable, not only as it might render the work more generally acceptable, but also as it might be the means of avoiding expense. It was therefore a favorite object with the Commissioners, and pursued until after various unsuccessful attempts had proved the extreme difficulty, nor was it abandoned at last but from necessity. To show the obstacles which frustrated every effort can be of no use. It will perhaps be more satisfactory to each person who may feel aggrieved to ask himself whether his sensations would not have been still more unpleasant had his favorite plans been sacrificed to preserve those of a more fortunate neighbor."

Leaving aside the absence of any explanation on this fundamental point, and the debatable conclusion that it is preferable to frustrate everyone's interests than to frustrate only some, another point worth noting is that the Commissioners attempted to accommodate existing interests to the plan only after "having determined ... that the work ... should be rectangular."  Since the existing roads of Manhattan largely followed an organic pattern, as can be seen at right, any attempt to conform them to an inflexible rectilinear grid was doomed to failure from the start – a fact which would have been immediately obvious to an experienced surveyor such as Commissioner Simeon De Witt.

This order of consideration could only be justified if the Commissioners believed that the public advantages of the grid plan outweighed any public benefits to be gained from following existing streets and property lines.  Such a comparison of costs and benefits is not made in the Commissioners' report, however.  Instead, the Commissioners compare the unadorned grid to a caricature of Baroque city planning ("those supposed improvements by circles, ovals, and stars which certainly embellish a plan") an oversimplistic and unserious exercise which seems designed to set up the choice of the grid without having to explain its supposed benefits.

By contrast there are two clear advantages of following the existing roads within the Commissioners' own report: 1) it had more public support and 2) it was less expensive -- not surprising, since the roads were already present, and did not need to be surveyed, marked or excavated.  Had the existing farmland boundaries formed new streets and lanes leading from the existing roads, in a typical pattern of incremental organic growth, the pattern would have grown still more complete, as shown at left.

So what was actually underlying the Commissioners' decisionmaking?  Peter Marcuse in his 1987 essay concludes that "the grid in 1811 in New York signalled the triumph of the interests of larger landowners and speculators over all competing concerns," indirectly suggesting that the Commissioners' stated concern for the public good was an empty gesture.  In this view, the "convenience" of the plan mentioned in the report reflected only that the grid was easy to survey and created lots that were easy to track and sell.  Perhaps the Commissioners, having been entrusted to "plan" the city, also could not imagine a form of "planning" that did not involve drawing straight lines and right angles.  Whatever the reason (and ease of surveying can't be ruled out), this planning idea caught on, and as Marcuse observes the remainder of the century saw thousands of American towns and cities laid on on regular grids.

Still, with use of the 1782 map shown here, it is possible to consider what might have happened if the Commission's task had been limited by the New York legislature to only surveying the roads in existence, and marking out new lanes along existing paths and boundaries -- or if no Commission had come into existence at all (while further taking the license of omitting some of the speculative grids which were laid out between 1782 and 1811).  With many additional streets filled in according to topography and property lines, I'll leave you with one version of how that lower Manhattan might have eventually looked: 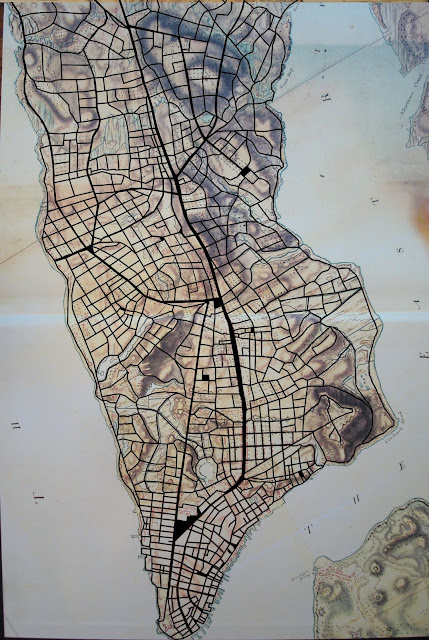 Posted by Charlie Gardner at 7:30 AM