Density on the Ground: Cities and Building Coverage

Alon Levy has a new post up about height and density where he argues that to move beyond a certain density, a city will ultimately have no choice but to build upwards.  Density is not simply a function of the height of buildings, however, but also depends upon the area that they occupy.  A city in which buildings occupy a relatively small proportion of the total city area will have room to grow either vertically or horizontally (the latter of these represented by the process of street narrowing, or other forms of infill).  ﻿﻿

Allan Jacobs in his book Great Streets features a section in which he presents painstakingly drawn figure-ground maps of several dozen of the world's best-known cities.  Although he calculates the intersections and number of blocks per square mile, both indicators of connectivity and pedestrian accessibility (see Laurence Aurbach's site for more on this topic), no figures are given for the proportion of city land occupied by buildings and rights-of-way (and other public spaces) for each city.
Although performing these calculations for all of his chosen cities would be a major undertaking, I've put together some approximate figures, with abundant help from Google maps, for a selected range of cities, both American and not.  Shown are the proportions of each city occupied by 1) buildings or buildable land; 2) rights-of-way, including streets and sidewalks, and 3) other public spaces, including parks and plazas.  Unless otherwise stated, these figures refer to the general downtown areas of each city: 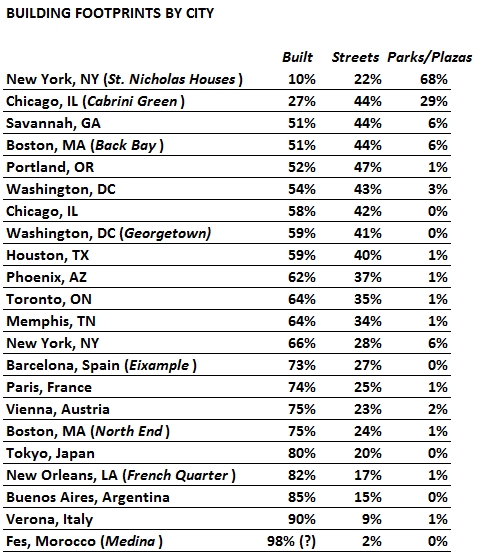 A few quick notes: St. Nicholas Houses is a public housing project in central Harlem composed of cruciform towers on a superblock.  New York's figures include Central Park.  Measuring park and plaza spaces in organic cities like Paris or Vienna is a bit of a challenge: depending on the area examined, for instance, Paris' figure for parks might be somewhat higher.  Fes is just an estimate, as the narrow footpaths of the city's old town are barely visible from above, but in any event it appears to be about the maximum possible built coverage possible without moving to an entirely streetless city.
Hopefully these numbers can provide one additional angle on the density question.  I have some ideas how they might be paired with Jacobs' figures and some other measures to provide an even fuller picture of both density and connectivity, but I'll save that for another post.
Related posts: Charting the Grid
Posted by Charlie Gardner at 7:00 AM