We Are the 25%: Looking at Street Area Percentages and Surface Parking

Several months ago I posted a chart in which I calculated the proportion of land given over to buildable space, right-of-ways and park space for each of 22 cities, or city neighborhoods.  In response, one commenter suggested that I perform the same exercise with off-street parking included as a separate category.  Although the work of Chris McCahill, which I featured last week, does just this for a number of cities, another commenter directed me to this thread at Skyscraper Page, where a number of people have mapped surface parking lots for several American cities.  I'd like to feature three of those here (which I've further edited to show parking structures and park space), while adding one of my own.  No guarantee of perfect accuracy is given. Red shows surface parking, yellow shows above-ground parking garages, and green shows park space: 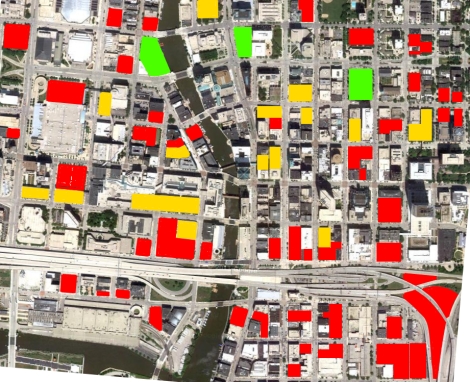 Milwaukee, WI
Surface parking: 11.5%
Garage parking: 3.8%
Street area (including sidewalks): 38.8%
Total area for rights-of-way plus off-street parking: 54.1%
Park space: 1.5%
Washington, DC
Surface parking: 1.1%*
Garage parking: 0.0%
Street area (including sidewalks): 43.3%
Total area for rights-of-way plus off-street parking: 44.4%
Park space: 2.53% (5.00% including Ellipse)
*Much of this is the large lot to the east scheduled for redevelopment as CityCenter
Although these numbers are interesting enough on their own, I bring them up to emphasize the importance of the street grid in determining the balance of buildable to non-buildable land.  Even the difference in unbuilt area between the downtowns most dominated by surface lots, and those most built out, as is the case for Houston and Washington, is no greater than the difference between Washington and the European cities with the most generous street allotments – the Paris of Haussmann, with its broad boulevards, imperial Vienna of the 19th century, and Barcelona's Eixample, all of which devote around 25 percent of their area to streets.
It is difficult to imagine a justification for much exceeding the 25 percent figure.  Many cities of similar size and far larger than those just mentioned make do with less, including Tokyo, Mexico City and Buenos Aires, while accommodating extensive mass transit systems.  The traditional city of narrow streets and small squares, typified by towns of medieval plan, find ten or fifteen percent perfectly adequate.
In addition to their transportation function, streets can also be understood as a means of extracting value from underserved parcels of land.  The street removes a certain amount of property from tax rolls in exchange for plugging the adjacent land in to the citywide transportation network.  Access to the network, in turn, increases the value of the land for almost all uses.  For the process to satisfy a cost/benefit analysis, the value added should exceed that lost to the area of the streets plus the cost of maintenance. (This implies rapidly diminishing returns for increasingly wide streets, and helps explain why, in the absence of mandated minimum widths, most streets are made to be fairly narrow.)  For many of the gridded American cities of the 19th century, as I've written about before, planners failed to meet these objectives, although these decisions have long since been overshadowed by those of their 20th century successors.
The result, most notably in Portland, which devoted over 40 percent of its initial grid to streets, was simply to reduce the maintenance budget to zero, and to leave the streets a sea of mud.  This in turn resulted in a street network that was unsuited to any form of transportation, but particularly to walking (the late 19th century American city, despite the claims of some, was not a pedestrian's paradise). For Portland to have attained the 25 percent figure would have required streets of 30 feet rather than 60.  At that average width, it is likelier that paving would have been within the financial reach of the city of that era.

Still, it is difficult to conceive of a more wasteful pattern than modern Houston's, where redundant wide streets, and their associated infrastructure, are paved and maintained to serve dozens of vacant parcels.  Each new office tower, meanwhile, spawns hundreds of acres of tract housing on the city's periphery, as lots a few blocks away sit vacant on high-rise speculation.
The one blessing in disguise of the form of a city like Houston or Little Rock is that it can allow planners a relatively free hand to reshape the existing street network.  Houston has in fact taken some halting steps in favor of more pedestrian-friendly streets, and planners like Christof Spieler have in mind truly urban visions for building out the remainder of the downtown.  It would be disappointing to say the least if these downtowns are eventually rebuilt and revitalized without rethinking the street plan itself.
Related posts:
A Defense of the Grid
Density on the Ground
Posted by Charlie Gardner at 2:38 PM