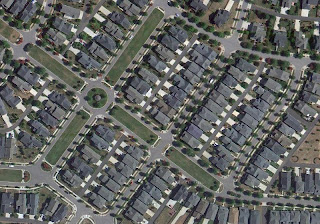 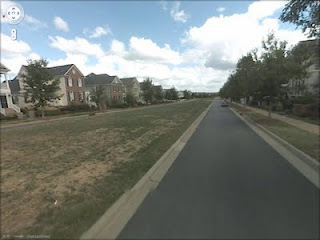 I received so many thoughtful comments on the last alleyway post that I thought I might contribute a few more examples from modern American suburbia.  In the comments, several people noted that the Orlando example I chose was poorly designed (I can't disagree), and that better examples of street-and-alley configurations exist.  After doing a few Google maps "fly-bys" of a number of cities, however, if better examples do exist they are not abundant or easy to find.  More typical is this example from Raleigh, NC at right: in this neo-traditionalist neighborhood, homes are painstaking replicas of Craftsman bungalows and foursquares on small lots.  Unlike the Orlando example, however, the developer has incorporated green space in the form of generous median strips, resulting in the streetscape shown at right (the central circle contains a white gazebo which, as far as I can tell, is purely decorative, as it appears to have no entrances). 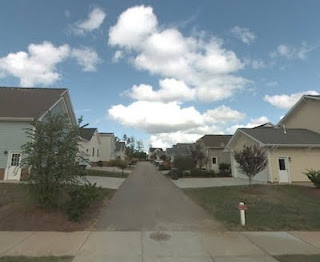 When it comes to the rear alley, though, a familiar sight is seen: the attached garage and impervious paved driveway occupying the entire backyard.  In the aerial shot it appears that every single property conforms to this design, even where there is clearly sufficient space for a backyard between garage and house (even accounting for mandatory rear setback).


And here's a New Urbanist example.  There are some efforts to create small backyard spaces behind detached houses and rowhouses, but overall the vast majority of the land behind homes is occupied by garages and pavement (this is Kentlands, MD Lakelands, MD). 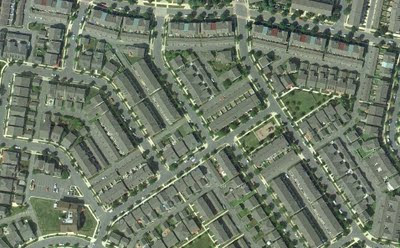 Here is Kentlands, showing considerably more attention to backyard spaces (thanks for catching my mistake, Laurence): 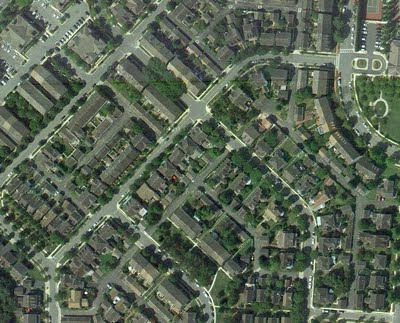 This is a New Urbanist-inspired development not far from Kentlands, showing clearly the presence of a decorative fringe of front and side yards, with rear spaces reserved almost exclusively for vehicle access.  The ratio of pavement to inhabitable built footprint appears to exceed 1:1. 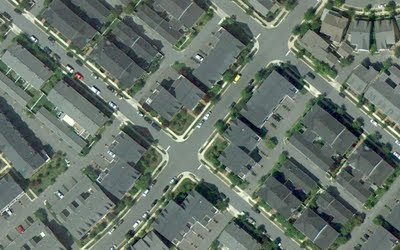 Not only suburban greenfield development but also urban infill  follows this format.  This is a block of new townhouses in southeast Washington DC, built in a traditional architectural style.  The planner has provided a small common area within the block, but again there is no private outdoor space except for a few rooftop patios. 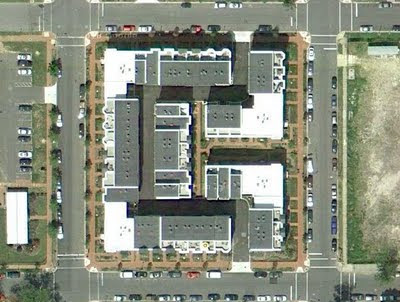 By contrast, here are a couple blocks in the Capitol Hill neighborhood, just north of the infill townhouses in the previous image, featuring both fronting streets, backyards and alleys: 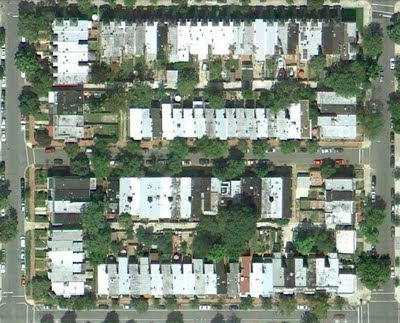 If anyone is aware of better examples of street-and-alley neighborhoods in modern developments, please let me know!
Posted by Charlie Gardner at 10:20 AM