The New York That Wasn't (But Might Have Been), part I

An attempt at a more reflective piece today as a short break from garages and alleys. (Updated 6.18.11 with Urbanphoto link).

March 2011 marked the bicentennial of the Commissioners' Plan of New York, the document which laid out Manhattan's familiar street grid from the vicinity of Houston Street north to Harlem.  In recognition of this milestone, there's been a modest amount of reflection on the plan both in the press and in the blogosphere, with some praising the plan, and others thoughtfully ambivalent.

In the past, however, the critical voices have generally been the loudest. Peter Marcuse in a 1987 essay referred to it as "one of the worst city plans of any major city of the developed world;" Frederick Law Olmsted criticized it for its "rigid uniformity;" John Reps noted its scarcity of sites for public buildings, lack of enough north-south streets, and frequent intersections creating traffic congestion; others have faulted it for obliterating Manhattan's natural landscape, while Recivilization has perhaps the most memorable turn of phrase, calling the Commissioners' plan "breathtaking in its monotony."

In spite of all these critiques, there's been relatively little thought devoted to what an alternative to the grid might have looked like.  To the extent that they are discussed at all, alternatives generally take the shape of the Baroque plans of the late 18th century in the manner of L'Enfant's plan for Washington D.C., with diagonal boulevards and grand circles, as one Columbia design class recently imagined.*  More realistically, Urbanphoto has an outstanding post on an earlier plan drawn up by city surveyors John Mangin and Casimir Goerck which was somewhat more more accommodating of the street networks already emerging north of the city.

*(The Commissioners had, in fact, considered such features and rejected them for ostensibly utilitarian reasons, although little more than a century later the planning departments of checkerboard cities such as Portland would note a lack of diagonal routes as a major utilitarian shortcoming of the grid).

There is another possibility, however, one that requires acknowledgment that the Commissioners' plan did not cover virgin ground, but rather overlaid and blotted out a complex network of roads, streets and paths that already covered Manhattan as early as the 1770s.  In the British Headquarters map of 1782, featured prominently in Eric Sanderson's recent book Mannahatta, not only is the former Indian trail of Broadway clearly discernible running the length of the island, but dozens or hundreds of other roads also, large and small, serving the many farmhouses and budding villages north of the city limits.  These roads were not planned by a single mind, but worn into the terrain by countless feet following a subtler intelligence: the intuitive search for the smoothest, most level and most direct paths to the most important destinations, perfected by repetition over years, decades and centuries.

Oddly, it is this process of road and street formation -- which Spiro Kostof refers to as the organic typology -- which earns the least respect from writers on urbanism.  On New York's organic street network in lower Manhattan, dating to the days of the Dutch settlers, it's easy to find statements like these:


"Until the grid most New Yorkers were clustered below Houston Street in a confused maze of streets and lanes."
"Prior to the Commissioner’s grid plan, the city’s streets had been laid out rather willy-nilly, as befitting a city that was founded in essentially late mediaeval times..."
There seems to be an assumption that if a street network does not have obvious regularity or other indisputable evidence of direct human design, then it must be simply random and therefore, impliedly, inefficient or unsuited to the needs of the people living along it.  But was this street network really "confused" or "willy-nilly"?  Here is an adaptation of the Castello Map of New York, dating from 1660 and showing the streets and homes of the city at that time: 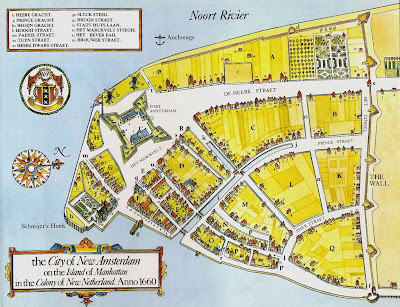 The Dutch origins of the city, with its canals, are obvious, but the functional logic of the streets, though evidently not formally planned, are anything but confused or irrational.  Broad streets carry commerce to and from the waterfront and gently angle northwards, reflecting the natural course of trade unencumbered by sharp right-angled turns.  Single-family homes are being built along the quieter narrow lanes running perpendicular to the thoroughfares, with the process of block subdivision reflecting the higher value of land close to the docks.

There is an elegant mathematical order to the street network as well: each curve of the broad streets defines a shape which mimics the shape of the island itself.  This is a typically fractal pattern, defined as "a rough or fragmented geometric shape that can be split into parts, each of which is (at least approximately) a reduced-size copy of the whole."  (See Mathieu Helie's extensive writings about this idea in the context of architecture and urbanism.)  This particular pattern is presumably the result of accommodating a grid-like network of streets, with blocks of roughly equal size, to the constrained geography of Manhattan.

In the following century, this initial plan was organically extended north of the wall, guided by pre-existing paths and roads.  In the following post I'll show a rendering of what might have resulted had the city of the 1790s simply decided to let this process, ongoing at that point for almost 175 years, continue to follow its natural course.
Posted by Charlie Gardner at 9:30 AM