American Zoning as an Expression of Nativism

It's possible to advance many explanations for the rise of zoning in the United States in the 1920s: classism, resurgent racism, reaction to rising vehicular traffic, the failure of restrictive covenants and many more.  While all of these reasons, among others, have some explanatory power, for me they fail to adequately account for the unique and distinguishing features of American zoning as described by author Sonia Hirt, namely, the establishment of exclusively residential zones as well as the creation of single-family detached zones.

A possible alternative explanation is that these specific features were motivated by and in reaction to many of the same conditions that gave rise to the immigration restriction movement which came to prominence at nearly the exact same time.  For example, the village of Euclid's zoning ordinance, which led to the Supreme Court case of the same name, was adopted in November 1922, slightly more than a year after the Emergency Quota Act of 1921 was enacted.  Restrictionist currents were running very strongly throughout the nation at the very time that cities busied themselves passing zoning laws.

Now, one fact that may surprise is that immigrants at the turn of the century actually had higher homeownership rates than the native population.  This chart, compiled by economist Richard Sutch in a recent paper, depicts homeownership by city size in 1900 among the native-born and foreign-born, showing that the foreign-born had substantially higher homeownership in virtually all cities and city sizes apart from New York (the entry point for many immigrants), where the difference was nonetheless small: 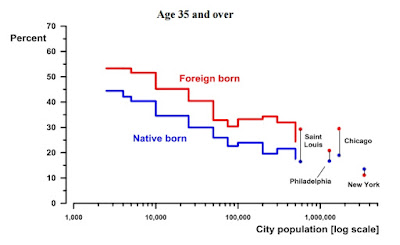 How, or why, did the foreign-born achieve relatively high rates of ownership? Sutch speculates that immigrants valued property ownership due to "the importance of acquiring a life-cycle stock of wealth because of an inability to rely upon distant family members, the larger community, or co-ethnic neighbors for protection in old age."  Contrarily, in From Cottage to Bungalow, Joseph Bigott writes about ethnic savings and loan entities in turn-of-the-century Chicago and how these offered greater financial flexibility, in some sense, to new immigrants.

What seems to be generally agreed on is that immigrants, more so than natives, embraced small multifamily dwellings and home commercial uses, whether as simple as a chicken coop in the backyard or as elaborate as an entire storefront added onto a single-family home.  Jacob Wegmann, writing in What Happened to the Three Decker, quotes a developer as noting that the small multifamily dwelling provides "a way for working class folks with no established assets to obtain an owner-occupied residence." Additionally, he writes:

"[I]mmigrant families, many of them already the owners of small businesses, were likelier to be undaunted by the extra risks and work posed by being small landlords, such as the need to build up cash reserves to cover loan payments in the event of vacancy of the rental apartment. Additionally, partially due to Chicago’s characteristic clustering by nationality, many immigrant families have an extensive network of acquaintances from the same ethnic group to draw upon as a pool of potential tenants, and for whom credit and character checks can be undertaken in a verbal, informal manner via social contacts."

The small business and the multifamily dwelling were, in that sense, the gateway to prosperity for many immigrants, as well as a gateway to homeownership, around 1900 and continuing even today.  Given that reality, I think the observer of history should find it very odd how central a position American zoning gave to the exclusion of commercial uses from residential areas and the banning of multifamily uses from large areas of entire cities, particularly when other countries not so well-known for their elevation of so-called property rights embraced neighborhood commercial as a desirable and positive social good.

I do not know what the position of Edward Murray Bassett, the father of American zoning, was on immigration.  His autobiography is virtually impossible to obtain.  His writings available online do not directly mention it.  I would perhaps give him the benefit of the doubt.  The motives of many of his contemporaries, however, are not in doubt, as Seymour Toll wrote in 1969 in Zoned American:

"The [laundry] controls were an expression of the hatred and antipathy which San Franciscans were directing against the Chinese, trying to force them to quit the city. The immigrant is in the fiber of zoning.  He first appeared as an Oriental.  In early twentieth-century New York he is seen as a southeastern European, the lower East Side garment worker who presence in midtown Manhattan created one of the decisive moments in the history of zoning."

None of this is terribly new or controversial.  A connection that hasn't been made as clearly is how single-family zoning and the total exclusion of commercial uses were specifically targeted at the immigrant businesses and housing options described above.  A newly-arrived immigrant (and most people in general) did not have the capital to construct an entire "mixed use" building.  After some time, though, he might be able to add a very small commercial addition onto an existing building, as shown in the photo above, or convert the first floor into a storefront.  Zoning would forbid this development in two ways: first, by instituting setbacks, and secondly by eliminating commercial uses altogether.  Even native residents needed commercial uses in close proximity, but these were to be relegated to special corridors where competition would be greater and immigrants would have more difficulty gaining a toehold.

With respect to residential buildings, the banning of small multifamily buildings from much of the city foreclosed the route to homeownership previously mentioned.  A century after New York's zoning code was adopted, the numbers have flipped, and the native born are much more likely to be homeowners than the foreign born (67% to 52%, according to the Census).  The financial benefits of homeownership, moreover, have been concentrated in the hands of the upper middle class, the original backers of zoning.

It is only antipathy to immigrant populations that I think can explain these dual features of almost all American zoning codes, and their absence from the codes of most other countries.  The apparent trauma of early 20th century immigration led Americans, or at least a vocal portion of them, to shred their traditional respect for individual property rights and institute special zones which reflected native middle-class values and conceptions of proper living conditions.  The loss of neighborhood shops, or affordable rentals, were unfortunate but necessary casualties of this process.  Elsewhere in the world, the process of commercial conversion can still be watched unfolding, as below in Mexico.

I am not certain, though, that the alliance against shops and multifamily dwellings was ever as unified as it was made out to be.  Then, as now, the loudest and shrillest voices probably carried the day.  Many natives would have liked to have run businesses out of their homes as well, although the importance of multifamily housing a means to ownership waned with the arrival of new forms of mortgage finance in the 1920s and especially 1930s.

While times have changed, the rolling back the restrictive laws of the 1920s would pay dividends even today.

Posted by Charlie Gardner at 8:17 AM