Citylab recently posted an interesting profile of a new development in Harlingen, Texas by Amanda Kolson Hurley.  Having written about this area of the country earlier this year, I was curious to take a closer look at the development, which appeared to take some design cues from the Mexican urbanism that is just a short ride away from this border region.

An aerial view of the development, La Hacienda Casitas, shows it set among mobile home parks that are very common in Harlingen.  These homes, however, are site built, and use lots as small as 1,800 square feet, which is similar to the lots sizes found in the new developments of Matamoros, Mexico.  Streets range from 16 to 22 feet wide, with some on-street parking: 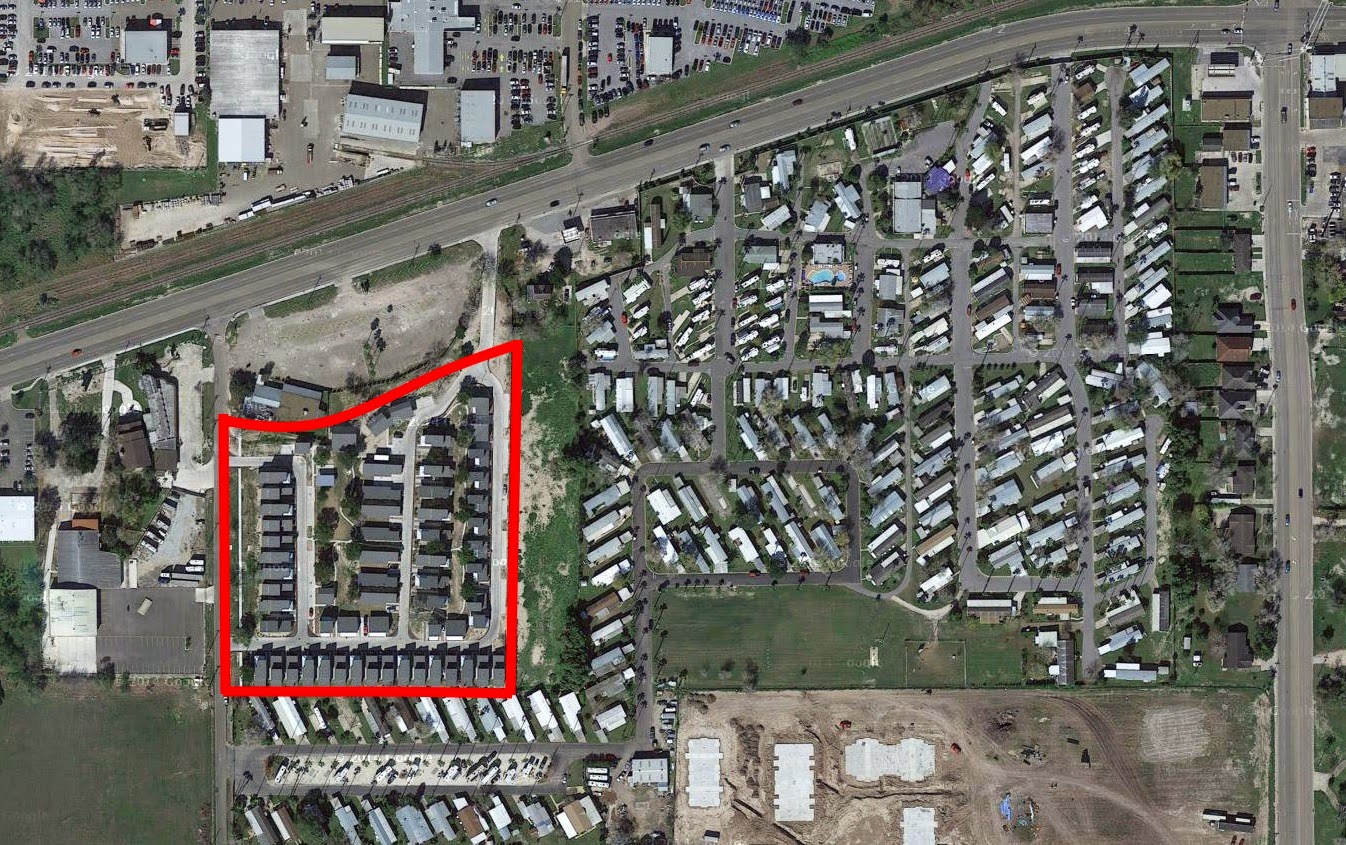 The more I looked around Harlingen, the more this particular development stood out: overwhelmingly, new development in the city consists either of mobile home parks or much larger suburban homes of the type found in sunbelt cities across the United States.  It was a pattern I'd seen before, in Bradenton, Florida, where the city's zoning code divided single-family housing into two types: large lot, site-built suburban and small-lot, manufactured and/or mobile.  Could land use in Harlingen be governed by similar provisions?

Fortunately, the city puts its zoning ordinance and map online in an easy-to-navigate format, so finding residential lot minimums was not difficult:

Here we see that Harlingen, like Bradenton, establishes a minimum lot size for lots in mobile home parks that is less than half that required in the single-family "R1" zone.  In fact, the ratio between the two zoning categories is nearly the same in both cities (Harlingen: 6000/2400 = 2.5 vs. Bradenton: 7200/3000 = 2.4).  Unlike Bradenton, Harlingen does not seem to establish minimum sizes for the dwellings themselves, although setback and lot coverage requirements impose effective maximums that are most restrictive on very small lots.

How well the city holds developers to the limits I cannot say for sure, although most lots in developments platted within the last 20 years appear to be between 6,000 and 7,000 square feet. On first blush the "Planned Development" zone appears to provide some flexibility, but it requires the developer to own a parcel of at least five acres, leaving it unavailable to small-scale builders designing infill projects.  Townhouses are also an option, but are not permitted by right in R1 zones.

In any event, the disparity between zones again appears to create a binary pattern of real estate prices, with new site-built homes on large lots averaging around $145,000, and manufactured homes only $45,000 or so.  Thanks to zoning-abetted filtering*, some site-built homes can be bought for no more than $60,000 to $70,000, but these tend to be of very low quality or on much smaller lots that seem to have been grandfathered in under the present zoning code.  This mandated land consumption obviously contributes to a low-density pattern of urban growth, and also illustrates how zoning's affordability and quality of life impact isn't limited to large coastal metros.  Harlingen's affordability safety valve, the mobile home district, establishes what is in effect a physically segregated zone for low-income, market-rate housing where even the homes themselves are forbidden from being site-built.

In light of all this, was the La Hasienda Casitas project an attempt to circumvent the code with a development of houses on tiny lots and narrow streets, thereby making occupancy (the homes appear to be rentals, at least for now) of new, freestanding and site-built homes available to low-income families of Harlingen?  Kolson Hurley's article discusses the intensive coordination and grant-seeking between and among architect bcWorkshop and non-profit housing developer Community Development Corporation of Brownsville needed to bring the project to fruition, but I have to wonder whether regulatory barriers, rather than anything inherent in the design and construction of this project, is what is standing in the way of adoption of the style by for-profit developers.


*Zoning-abetted in that the restriction of centrally-located lots to single-family use effectively caps land values, allowing the physical deterioration of the housing stock to play the predominant role in establishing property values.