City Blocks: The Spaces In Between

A reader recently emailed me with an interesting question:


"While I have a good sense of the design elements of the narrow street and attached housing for the front, I don't see much of what the back looks like.  Is it better to only have windows on one side and have a separate residence with another shared wall, This seems the most effective but do people want sunlight from both sides? Are they using private backyards, an alley, or both together? ... Are there shared courtyards and should these have grass? Isn't that similar to 'green space'.

The story of what has taken place in the spaces between blocks is an unexplored chapter of urban history. Every now and then particular episodes have been covered, with writers generally critiquing the process by which open space in block interiors yielded to new buildings.

Lewis Mumford in The City in History described, with disapproval, the process by which rear yards in medieval cities were filled in with houses and apartments as urbanization intensified in the late middle ages. Haussman has been criticized for permitting landlords to construct "airless and crowded tenements" behind the elegant street facades of new Parisian apartment buildings.  Others have lamented Barcelona's failure to maintain the interior of blocks in the Eixample as green space.  Even the modest concept of the mid-block laneway house has become a subject of controversy.

The process of block subdivision, infill and densification isn't an aberration, however, but instead represents the basic engine of urbanization in all times and places, at least where the process is not stunted or halted entirely by regulation.  It is more noticeable when it occurs in the context of an idealized plan, such as Haussman's for Paris or Cerda's for Barcelona, but the same process is at work in thousands of other less noteworthy cities.

A 1615 drawing of Paris shows the process well: the blocks outside the old city walls, to the left, are thinly lined with rowhouses backing onto ample gardens, while inside the wall, blocks once similar have been carved into much smaller pieces by narrow streets until, at farthest right, interior garden space has almost vanished.

To return to the question that was posed, what is happening to the interior of the blocks during this process?  In the unplanned city, the process of subdivision generally proceeded until an optimal ratio was struck between streets and accessible block space. Driving the process is the principle of maximization of land value, where a new street was justifiable only to the extent it increased adjacent land values in excess of the space lost to right of way, bearing in mind that ground floor, street-front rents are almost invariably command rents much higher than those on any other floor.

The result, in almost all cases, was a proliferation of small, or at least narrow blocks, generally not much more than 150 feet wide, and frequently a lot narrower.  The image below of Bordeaux shows the end result of this process, with the block partially outlined in yellow, for scale, measuring 115' by 380': 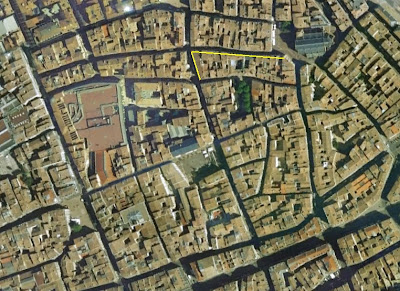 With blocks of this width, few apartments are entirely buried within block interiors, lacking street-facing windows or exits, while light shafts admit sunshine to inward-facing rooms. There are no rear alleys and no yards, yet most apartments do receive natural light from at least two directions.  Larger blocks frequently incorporate interior courtyards.

The same pattern can be imitated by planners, as in the case of Taipei, with the outlined block, one of the largest in this neighborhood, measuring only 75' by 200', with a small space left between back-to-back apartments.  Streets are generally about 16' wide, with wider arterials at intervals. The amount of street frontage within a five-minute walk of this block must be phenomenal, providing a resident with access to many dozens of businesses steps away from his front door. 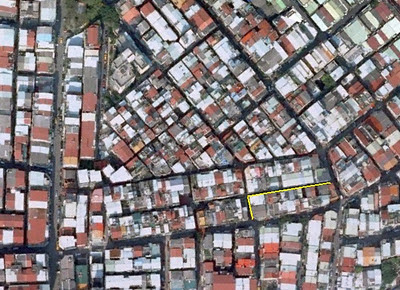 Due land value gradients, block size in the unplanned city generally shrinks toward the center.  With planned cities, the opposite pattern is often seen, due to a tendency for grid-makers to overscale city blocks at the outset. leaving too much space too far from the street grid (a decision compensated for, in some places, by the introduction of alleys).  Mexico City and Salt Lake City were laid out centuries apart, but in both cases a clear transition toward much smaller blocks is evident beyond the original gridiron as the economic picture came into clearer focus and the benefits of narrower blocks became more evident: in Salt Lake City (below right), from 720'  to 380' square blocks, and in Mexico City from blocks 270' wide to 120' wide: 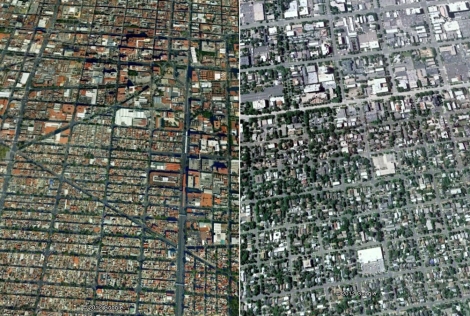 The dimensions for the Mexico City blocks closely approach those which Nathan Lewis has proposed in his writings: see How To Make a Pile of Dough with the Traditional City 5: The New New Suburbanism (scroll to the end for diagrams).  Blocks of this width can accommodate almost any type of structure with little wasted space: single-family homes with modest yards in Tokyo, rowhouses with small rear courts in Philadelphia, large apartment buildings in Barcelona.  Even skyscrapers are entirely possible.  At 200' feet and above, however, the width of the narrowest blocks in most American grids, even the largest townhouses struggle to fill up the space.

Ultimately, the question of what is going on between blocks depends in large degree on the size and shape of the blocks themselves, and that is a topic on which the experience of cities from around the world have a lot to teach us.

Other discussions:
Why are Blocks that Size?
The Variety of American Grids
Posted by Charlie Gardner at 10:49 AM