A family member back from a Japan adventure was kind enough to oblige my request for photos of street scenes during her travels. Although you can easily get your Japanese narrow streets fix at Nathan Lewis' site, or even on Google Streetview, which now covers most of Japan, I thought I might share of few of them:

Although many streets are effectively pedestrianized like this one, with little auto traffic, few if any are actually physically closed off to cars. On-street parking is almost nonexistent. Almost all bikes seem to be of the cruiser type at left, with high handlebars, comfy seats and a basket almost invariably attached in the front (and often the back as well). Helmets? Very few if any are worn, apparently.

Arcade-style public shopping streets, running for block after block, are abundant. In Kyoto, it appears a person could walk across much of the downtown area without leaving the shelter of one of these covered streets. Despite the near-total lack of nearby parking, the visual evidence shows that these streets aren't suffering from a dire lack of customers. I expected to find a website devoted to them, but that seems to be a project still in search of a creator.

Under Mayor Bloomberg, numerous design interventions of this sort have been carried out, and although some redesigns have brought significant transformations -- Times Square, for example, or the reworking of Grand Army Plaza in Brooklyn -- others have been little more than glorified patch jobs, taking common-sense but modest steps to address notoriously dangerous crossings and intersections without unduly interfering with the primacy of high-speed automobile circulation. While there has been abundant use of colorful paint to widen sidewalks and expand pedestrian plazas, and the wonderful addition of bike-sharing and new bike lanes, few streets have seen thorough overhauls that are consciously geared toward improving quality of life for those on foot rather than simply enhancing safety and mobility.


Incremental changes make sense as a general rule, but in a city like New York, surely there is room, and appetite, for at least one transformational street project?  However, certain major changes, such as wide-scale permanent pedestrianizations, have generally fallen out of favor since the 1970s, while the imaginations of some planners and architects can get carried away in impractical, overly-complex or even fantastical directions when presented with a large blank canvas to work on, as in the case of this fanciful example from last year's Greatest Grid exhibit, showing a Manhattan street repurposed for agriculture: 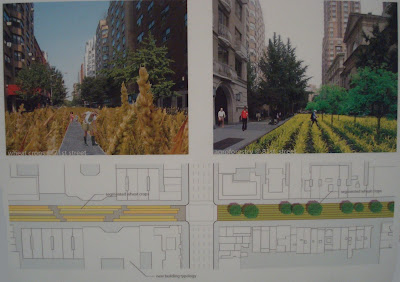 A more realistic plan is the "Yorkville Rambla," developed by John Massengale and Dover, Kohl & Partners, which would essentially pedestrianize the center lanes of Second Avenue. The plan is simple, elegant, and most importantly, draws on established design predecent shown to be successful in similar urban contexts. The design does not contemplate a complete pedestrianization, but on New York's avenues, due to the need for dedicated bus and bike lanes, this is not likely to be feasible:


The plan pays homage to Barcelona's renowned thoroughfare, but there are in fact successful examples from New York itself very similar to the proposed design. Here, for example, is Dag Hammarskjold Plaza, a city park nearby the United Nations complex which was completely reconstructed in the late 1990s. Although it is classified as a park, and is administered by the city's parks department, rather than the transportation department, when viewed in context of the adjacent 47th Street, it is clear that the so-called plaza is actually a classic urban promenade:

Its design is brilliantly simple in my opinion, incorporating a few basic principles:
Another promising and perhaps even more feasible plan would restore Park Avenue approximately to its early 20th century configuration by widening its median, although the plan by SHoP shown here does put a lot of unusable green space on the ground:


This seemingly High Line-inspired use of plants to restrict the area available for human use (without adding much visual green -- note the ratio of visual tree area to plant area of about 5:1, though the plant area probably occupies 100x the ground area) seems to be characteristic of many contemporary plans, including one by SOM for the elevated roadways around Grand Central. If that is the cost of deriving political will and public support from the High Line's success, though, then it may be an acceptable trade-off after all.

Whatever the plans of the next mayoral administration, whether led by de Blasio or another candidate, one hopes that at least one street redesign such as these makes it onto the agenda. For a relatively modest cost, the benefits not only in safety but in quality of life would be substantial.