An article in a recent issue of the New York Times, spotlighting Charlotte in covering the trend toward less driving among younger Americans, opened with the following paragraph:


"Dan Mauney keeps misplacing his car. Mr. Mauney, 42, lives in an apartment tower in this city’s Uptown neighborhood, a pedestrian-friendly quarter with new office buildings, sparkling museums and ambitious restaurants. He so seldom needs to drive that when he does go to retrieve his car in his building’s garage, he said, 'I always forget where I parked it.'"

Although Mauney may have little "need" to drive his car, need does not always align with behavior when it comes to transportation choice. When one's car is steps away from the front door, its use, relative to need, is likely to be high, even where other options are available. By contrast, where the car is kept in a remote storage facility, out of sight and immediate access, it is likely that use of the car more closely coincides with genuine need. In Mauney's case, that need turns out to be surprisingly low.

Mauney's building may be a high-rise, but a similar common garage parking approach has effectively been adopted among new apartment buildings of the type seen here, in an example from Dallas: 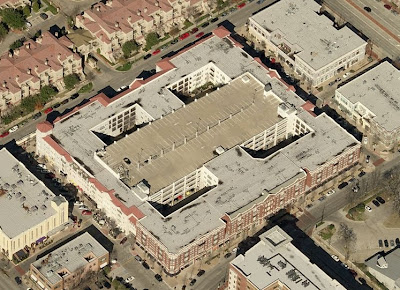 This is of course the notorious "Texas Doughnut," a mid-rise residential liner wrapped around interior structured parking.  The product of on-site parking requirements and building codes which permit cheaper wood framing for lower-rise buildings, these structures have proliferated throughout the Sunbelt, though they can be found, with less frequency, outside that geographic range. To the extent these cities are experiencing urbanization near their centers (hello, Dallas), this is the form that urbanism frequently takes, for better or worse.

Despite the prominence of the parking facilities and the transportation mode choices that suggests, note that many residents are required to walk non-trivial distances to reach their vehicles. In some cases, as in the example from Houston below, the walk may actually exceed three minutes for some residents (Google maps shows no parking of any kind, underground or otherwise, associated with the apartments to the NE, NW or SW): 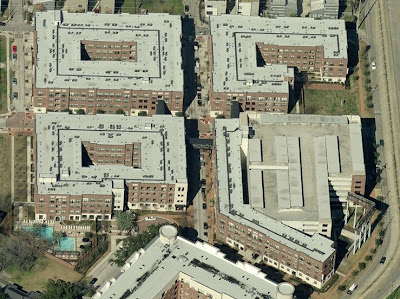 In debates about parking in urban areas, pricing and availability tend to garner the majority of the attention, with proximity only a secondary concern (although many complaints about these first two issues implicitly involve proximity). Similarly, attempts to reduce reliance on the car through parking reform have tended to focus on eliminating or reducing parking maximums or establishing a market pricing mechanism for parking spaces, rather than considering the location of the vehicle itself.

It should be common sense, though, that in an otherwise reasonably walkable area with some transit options, the further the car is from one's residence, the less use that car is likely to receive, since transportation is above all a matter of immediate convenience. Given that the "five minute walk" is generally accepted as a key walkability measure, having the car three minutes away inevitably helps shift the advantage toward walking. Other ways in which this modest time advantage could be magnified to privilege non-car modes could include:
Although these design elements are all consistent with the seemingly car-oriented Texas doughnut, they have rarely been put into practice. Rather, even where transit is present, the whole is often less than the sum of its parts: buildings are set back and present blank faces to the sidewalk, streets are engineered for vehicles, and the overall impression can be one of isolated and gated enclaves rather than a neighborhood (Dallas again, from Streetview): 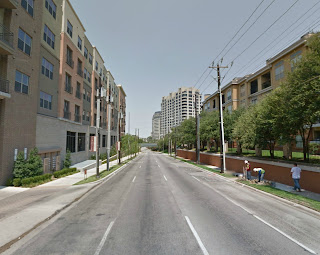 For a city to make a system like this work, an entirely new approach toward both parking policy and thoroughfare design would be necessary. Rather than managing on-street parking, as with parking benefit districts, cities would need to arrange for coordinating off-street parking, something which many cities have neglected (for instance, Norman Garrick and Chris McCahill have found that a city like New Haven, CT, does not even have a count of its available parking supply, even though off-street requirements for individual buildings are typically micromanaged to an absurd degree -- truly a case of failing to see the forest for the trees), and which is not necessarily resolved simply by abolishing parking minimums. The "fee in-lieu of parking" model is one promising approach, although it is often undermined by the continuing presence of on-street parking, which encourages endless cruising for temptingly convenient spaces rather than use of public garages built with the collected fees.

With the common garage parking model emerging in these Sunbelt developments, however, something similar is taking place though the independent actions of developers, and residents seeking to live a life somewhat less tied to the car are apparently finding it there.

Related posts:
Common Garage Parking, In Practice
Posted by Charlie Gardner at 12:28 AM