Garages and Alleys 3: Reworking the Block

In response to the previous post, commenter Cambias perceptively noted that the example I'd posted of Washington D.C.'s Capitol Hill neighborhood has considerably larger individual lots than those on the new blocks being built up in Capitol Quarter.  This of course makes it easier for the Capitol Hill lots to accommodate both private backyards and detached garages.

To show that this is an issue of design, not simply acreage, I've taken the same block from the previous post (below, at left) and proposed an alternative configuration with the goal of providing 1) some backyard space for each house with 2) at least one parking space per unit. 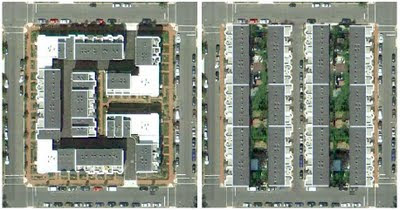 By eliminating front setbacks and narrowing the streets by about five feet on the east and west sides -- still enough to allow for parking on both sides of the street -- this goal can be achieved.  On street parking has increased to 65 from 52, thanks to the new center street, serving a total of 64 rowhouses, compared to 54 previously.  Additionally, each house now has a small, courtyard-like outdoor space.  It's just one possible layout of many, and I'm sure people can suggest changes and improvements, but my intent is only to show that this very same area can actually be redesigned to accommodate those features I'd criticized other plans for lacking.

The only complication here is the 1950s era DC Zoning Code, which appears to still require 1 off-street space per every 2 units in this particular residential zone (R-5-B).  This can result in the absurd scenario of interior garages and curb cuts which take away as many on-street spaces as they add, although it appears off-site requirements may now have been waived for houses without alley access.

Update: In response to Alex's comments, here's another arrangement that allows 1/3 of the townhomes space on which to construct garages fronting on the center street.  As to how many people would purchase a garage if offered one as an optional feature, or what the price differential is between homes with the potential of a garage and without, I have no idea (although it's worth mentioning that DC does have the second lowest proportion of car commuters of any major US city). 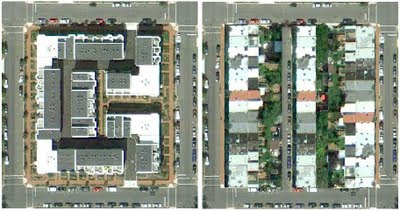 Posted by Charlie Gardner at 8:00 AM