Single Family Zoning: It's All About the Lot Sizes

Contemporary critiques of zoning take several forms.  First, and probably most common, is the critique of strict use segregation in the Euclidean manner, with commercial and residential areas segregated to greater or lesser degrees.  An increasing focus has lately been placed on the relative preponderance of single-family detached residential zoning within urbanized areas.  A third line of critique, which has received somewhat less attention although it has been the subject of numerous academic studies over the years, looks at minimum lot size requirements within both single-family and multifamily zones.

Although it may seem like a minor subject next to the first two critiques mentioned, the second critique is incomplete without examining permitted lot sizes.  For instance, even though a city may have substantial areas set aside for multifamily housing, if the minimum lot size per apartment unit (or floor area ratio equivalent) is approximately equivalent to single-family zones, the density and/or affordability difference may be minimal.  Alternatively, the single-family detached ("SFD") zoning designation, by itself, tells us little about the density of the area.  Depending on the lot area required and right-of-way widths, SFD densities for a given household size can range from 300/square mile to as much as 25,000/square mile or more, all without the need for any party walls.

A few concrete examples can help illustrate the point.  In the American context, despite the presumed consumer preference for SFD homes, neighborhoods of homes on very small lots and using narrow rights-of-way, such as are abundant in many other countries, are quite rare.  In the entire New York metropolitan area, for instance, there are only a handful of such neighborhoods, mostly those intended as beachside retreats along the southern shore of Brooklyn and on the Rockaway Peninsula.  One such neighborhood is shown here: 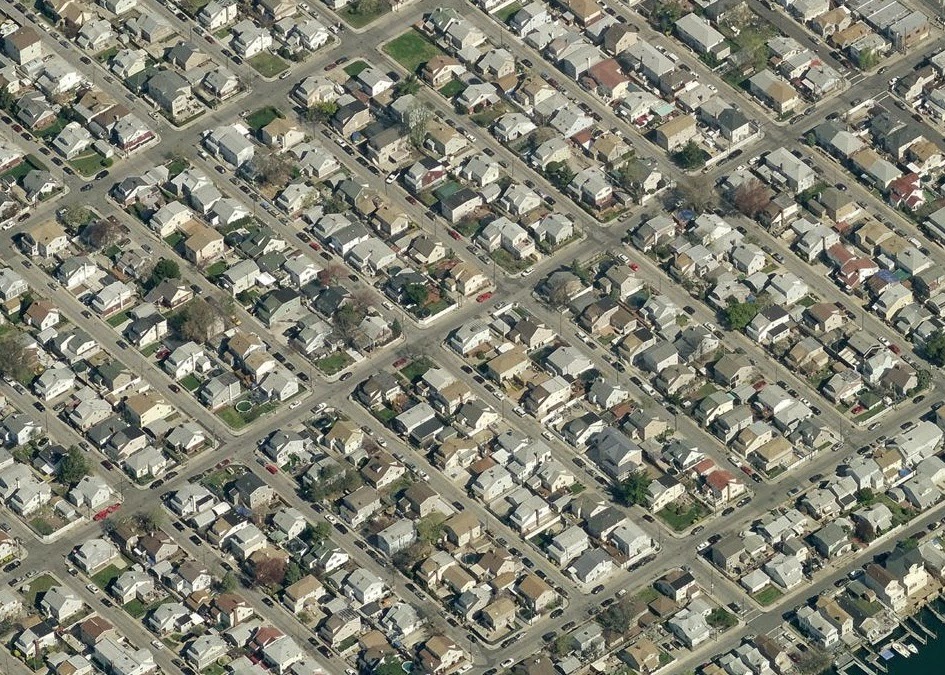 This is Gerritsen Beach, in Brooklyn, showing parcels of 1,800 square feet on a right-of-way (property line to property line) of 28'.  The 2010 Census gives a population density of over 17,000/square mile, about half of the average for Brooklyn, although this may be affected by the presence of second homes.  As Nathan Lewis has shown, similarly scaled neighborhoods in Tokyo attain densities exceeding 30,000/square mile.  Even so, it is about 80% denser than the densest SFD suburbs built in Nassau County during the 1940s-1970s.  It is more than twice as dense as Levittown itself, and denser even than the three-decker neighborhoods of cities like Worcester, MA or New Haven, CT.  The New York metro area has a conspicuous absence of neighborhoods of this density and type, with Census tracts swiftly falling off from around 25,000/square mile to 10,000/square mile.

Beach neighborhoods seem to be popular settings for this type of design, as a similar (but slightly lower) density is present in Long Beach, California, shown below.  Lots are around 2,400 square feet with a 40' right of way and alleys of 13' (comparable density appears to be achieved through presence of small apartment buildings): 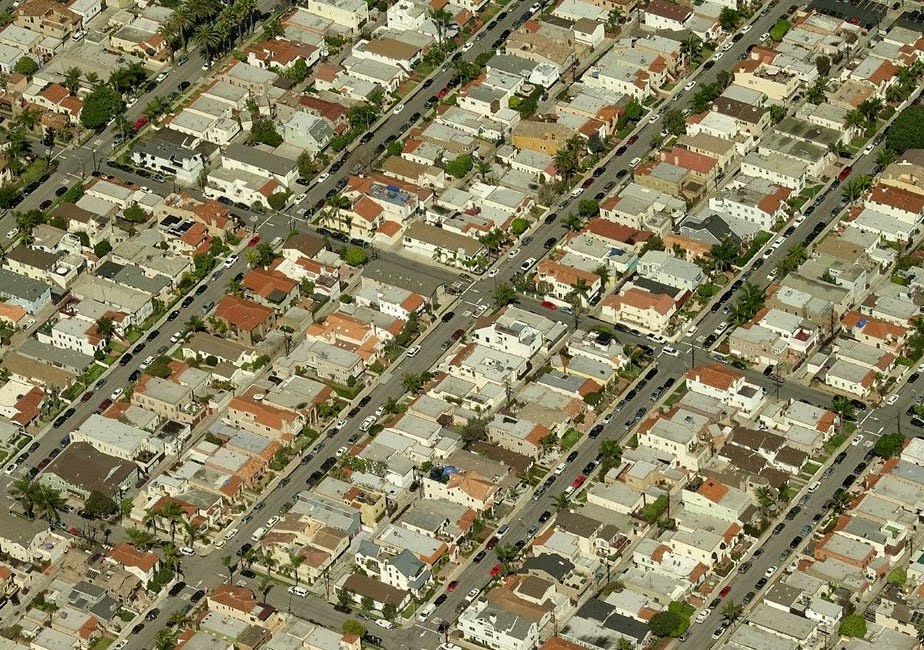 And here is Levittown itself, with lot sizes of around 6,000 square feet and right-of-way (between outer sidewalk edges) of 50'.  Population density is approximately 7,500/sq. mi.: 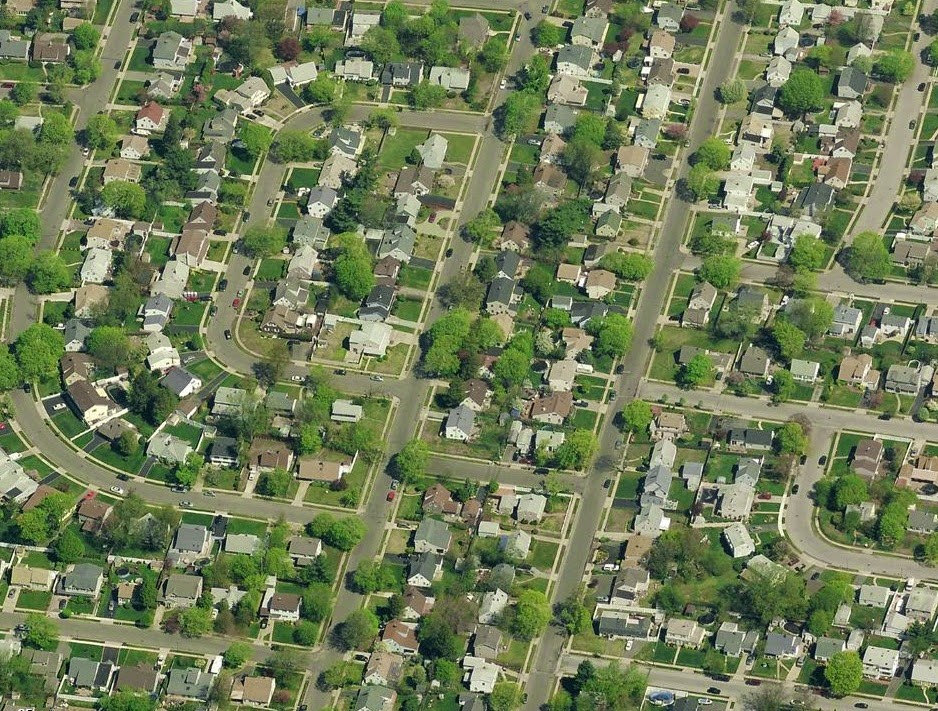 The Levittown homes in their initial form, intended for the large families of the Baby Boom era, were actually somewhat smaller (800 sq. ft.) than the 1920s vacation cottages of Gerritsen Beach (1,000 sq. ft.).  The contrast of very small houses with lots the same size or larger larger than those typical of the pre-1940 period seems to have been characteristic of the time period, perhaps related to the increased cost of labor following the Great Depression combined with stable land values.  The more spacious lots may have offered some compensation for the modest interiors.

At the extreme is the ultra-low density of interior but non-rural New England, showing 2- and 3-acre lot zoning (here, in Easton, Connecticut), accompanied by wetlands regulations, with population density of around 260/square mile: 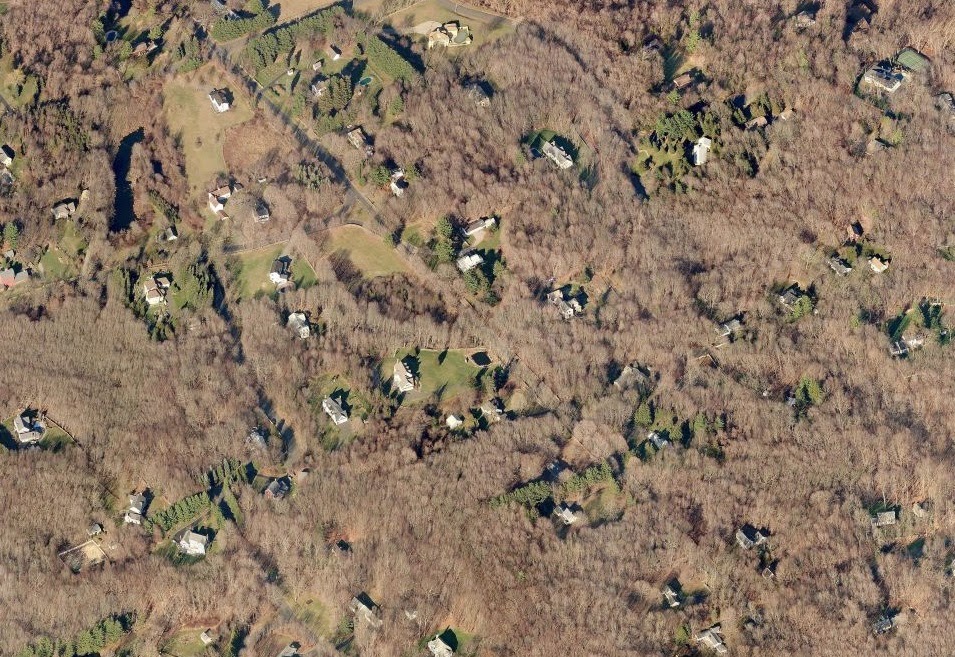 Now, if a rapidly urbanizing country wished to offer the possibility of ownership of a SFD home to the greatest possible portion of its population, the obvious policy goal would be to allow construction of a SFD home on any size lot desired, and on streets as narrow as possible so as to minimize economic waste.  The result is very much what we see in most of the wards of Tokyo as well as in Gerritsen Beach: very small lots but with practical (square-shaped) dimensions along narrow streets and no alleys.  Where multifamily buildings are not prohibited, these will be interspersed here and there, sometimes occupying two or three lots.

In practice, however, American zoning does not take this approach, with the sole exception of mobile home parks (which I've discussed here).  Not only are lot sizes strictly regulated for SFD zones, generally to standards far in excess of what is needed for a comfortably-sized home, other policy measures are in place that make small lots difficult to build as a matter of economics, such as:
The design differences produce some noticeable differences even at the very large scale.  The prefecture of Tokyo, with population 13.2 million, has a homeownership rate of 45%.  The city of New York, with population 8.4 million, has homeownership of 32%.  Although the prefecture's density is lower than New York's (16,000 vs. 28,000/sq. mi.), Tokyo's outer suburban areas are so much denser than New York's that its metropolitan area density is higher.  For the entire metro area, Tokyo maintains a 56% homeownership rate with 47% share of detached houses, as compared to New York with 52% homeownership and 36% SFD share.  Los Angeles, to pick another example, has 49% homeownership with 50% SFD stock.

A metro area of more comparable size to New York's, such as Kyoto-Osaka-Kobe, has a homeownership rate of 58%, higher than the entire state of New York, and not much lower than far smaller American cities commonly associated with low-density SFD housing such as the Houston MSA (60%), Dallas (61%), Atlanta (63%) and Phoenix (63%).

Interestingly, the issue of minimum lot sizes appears to be one on which there is general agreement between the Smart Growth faction and the defenders of suburbia, as Wendell Cox wrote some years ago in response to critique from the Brookings Institute:


"I was even more surprised at the claim that I defend 'anti-density zoning and other forms of large lot protectionism.' Not so.

Indeed, I agree with [Jonathan] Rothwell on the problems with large lot zoning. However, it is a stretch to suggest, as he does, that the prevalence of detached housing results from large lot zoning. This is particularly true in places like Southern California where lots have historically been small and whose overall density is far higher than that of greater New York, Boston, Seattle and double that of the planning mecca of Portland."

I think that Cox is correct here, but not even as correct as he could be.  Large-lot zoning not only does not cause a prevalence of SFD housing, it limits it, as shown in the New York metro area.  Los Angeles' metropolitan density is substantially higher than New York's (a point often raised to incredulous reaction), but its share of SFD stock is much higher.  To point out in response to an allegation that a city is heavily zoned for SFD that a majority of its housing units are in multifamily structures (in the case of Seattle, at the link) only underscores the point.

Although most studies have found that minimum lot sizes do affect overall development density (that is, developers appear to build at or near the minimum lot size allowed), one study of Maryland suburbs of Washington, D.C. found that, except in the case of areas with very large minimum lots sizes, developers were subdividing into lots larger than the mandated minimum, including in cases where planned unit development options left them with a free hand to build denser than the zoning code superficially allowed:


"We then examine the extent to which lot size is being constrained by regulation by comparing actual subdivision density to the allowable density under zoning rules. This analysis is done for three counties with different degrees of suburbanization. We find that only in the areas with the very large lot zoning does zoning seem to be constraining actual lot[] size. There is a good deal of excess capacity in the density that could be built, especially in the more densely zoned areas." Lot Size, Zoning, and Household Preferences:Impediments to Smart Growth?

There might be no concern with low-density development at the fringes of metro areas except that such areas, once built up, are politically almost impervious to change.  Some cities have implemented maximum lot sizes, but these are generally very generous and only apply in certain areas.  The misunderstood achievement of the New Urbanism, and the Maryland suburb of Kentlands in particular -- whatever its faults in design detail -- was that small lot single-family housing developments not only need not be qualitatively inferior to the 6,000+ sq. ft. tracts that characterized the post-1940 suburban era, and that they could even offer amenities that made them superior residential environments.  Where regulatory mandates fail, leading by example can succeed.

Related posts: None of mine, but Nathan has written several great pieces on the topic which you can find at his website.
Posted by Charlie Gardner at 11:30 AM