Do Cities Densify or Disperse as They Grow?

In a recent post, Chris Bradford has built on some of the findings I made on weighted density last month to show how housing affordability has relatively little relation to density.  In the graph below, I have a look at a related subject: the relation of total population to density, to determine whether cities tend to grow denser as they grow larger.  I use urbanized, rather than weighted density, since the purpose here is to determine the relative change in extent of the built-up area at various population levels, and plot it against MSAs ranked in order of population (not population itself). A trendline with period 20 is overlaid on the scatter plot. 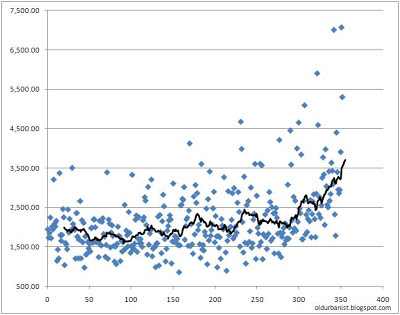 As predicted by the correlation data from an earlier post, urbanized density is here shown to be significantly related to total population, yet the scatterplot teases out some intriguing nuances in the data.  For instance, urbanized density shows little change for MSAs up to a population of around 200,000 (around point 150 on the X axis).  A modest upward trend is visible for cities between 200,000 and 700,000, after which the line slopes sharply upward. How to explain these trends?

An economic model using a simplistic urban land value gradient (illustrated as the New Urbanist transect) would find the results entirely predictable: as a city grows in extent, the time value of a central location becomes increasingly large relative to the price value of a peripheral location, such that we'd expect to see a slowing in the rate of growth of the urbanized area over time as either 1) new residents locate in existing, centrally-located neighbourhoods, 2) new greenfield developments are built at higher densities or both.

Using averages of urbanized area density for each population level, it is possible to visualize this process in action.  At left, I show the travel time in minutes from fringe to center (assuming for simplicity's sake a perfectly circular and monocentric city with no topographical impediments, and using the mean US commuting speed of 32 mph) holding density constant at 2,000 people per square mile, which represents the average density for MSAs of below 400,000 inhabitants.* At right are the same figures using the densities that are actually observed for each of the population ranges. 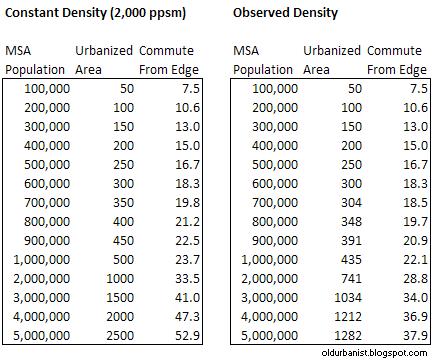 For smaller cities, even significant increases in population do not cause travel distance to the center to increase to unpleasant levels (bearing in mind that the typical person wants to devote no more than one hour per day to commuting), so densities do not increase – in fact, for cities less than 150,000, growth appears to track with a slight decrease.  Significant increases in urbanized density kick in only when travel distance from fringe to center approaches 20 minutes, and rapidly increase thereafter in an apparent attempt to keep maximum one-way travel time close to 30 minutes.  Were larger cities comparable in density to smaller ones, one-way travel times from the urban edge could approach one hour for cities of around 5,000,000.

At this point, I might expect Wendell Cox to interject with his contrary finding that "the general tendency is for cities to become more dispersed (less dense) as they grow."  Cox's conclusion was drawn from a statistical study of urbanized area density for cities from each of the 1950 to 2010 censuses, in which he found that most have indeed become less dense over time even as their populations increased dramatically during this 60-year period.  How can this be reconciled with the figures above?

In a nutshell, because the 1950-2010 time period covers a transportation, zoning and family planning revolution that completely altered commuting patterns and household composition.  In 1950, the interstate highway system did not yet exist, and relatively little new housing had been built following the emergence of zoning in the late 1920s due to the Depression and the lean war years.  The combined effects of these two developments – speedy access to city hinterlands combined with rules that prevented intensification of and discouraged investment in existing neighborhoods – no doubt contributed to a massive decentralization that overrode the natural tendency for urbanized density to increase with growth.  Additionally, household size contracted as the birth rate declined, which would tend to cause a steady decline in population density even where the concentration of housing units remained constant.

In fact, examining the fastest growing cities during the period 1980-2010, after the completion of the bulk of the interstate highway system, there is clear evidence of a swing back toward higher urban densities, particularly in those places that had little pre-automobile urbanism to de-densify either through abandonment or gentrification. Las Vegas, for instance, which had a population of 25 at the dawn of the auto era, is almost twice as dense as it was in the 1980 census. In Phoenix, lot sizes for new single family detached homes declined steadily after peaking in the late 1970s, leading to an odd situation in which neighborhoods on the urban fringe are often denser than much more centrally located ones. Notable exceptions include Southeastern boomtowns like Atlanta and Charlotte which, however, saw their density declines slow or cease after 1980.**

These numbers help provide a partial explanation for the data in an earlier post, Commutes, Tradeoffs and the Limits of Urban Growth, where I noticed that mean commuting times did not increase in step with population growth, and provides further reassuring evidence that even automobile-based urban expansion (i.e. suburbanization) contains a natural braking mechanism that will eventually slow the rate at which new land is consumed for development.

*Of course the average travel distance to the center will be less for the MSA as a whole, and most new residents will not be commuting to the center at all, typically reducing their commuting times.  The model is a deliberate oversimplification intended to illustrate basic trends.

**Interestingly, both Atlanta and Charlotte pursued major mass transit projects around this time period (MARTA's heavy rail system and the LYNX light rail, respectively) while much denser Las Vegas did not.  One could speculate that car commutes in Las Vegas were much shorter due to its density-driven compact urban area, leading to less political pressure for alternative forms of transportation to serve suburban commuters (despite being considerably larger than Charlotte population-wise, Las Vegas currently occupies only 56% of its land area).  Perhaps coincidentally, Atlanta and Charlotte, of very similar densities, approved tax increases to fund rail service at around the same respective point in their population development – Atlanta at 1.8 million, and Charlotte at 1.5 million.
Posted by Charlie Gardner at 11:00 AM 15 comments: