For a few years running James Kunstler has had on his website an "Eyesore of the Month" feature, which catalogs various failures in architecture and urban design.  In a similar vein, every now and then I'd like to focus on some more mundane poor design decisions, beginning with one that's been mentioned here before: rear access alleys, with reference to a new subdivision in Orlando that's typical of the type: 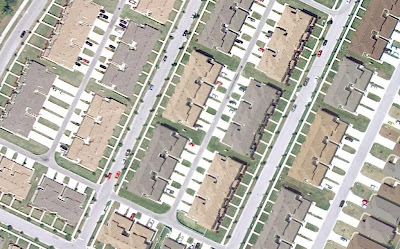 Unlike the typical late 20th century suburb of detached houses on large lots with front-facing garages (the much-derided "snout house" typology), this suburb clumps houses together in batches of six, and, in a presumably New Urbanist gesture, places the garages in the rear of the homes along ten-foot lanes, as can be seen above.  From the fronting street, the result looks like this: 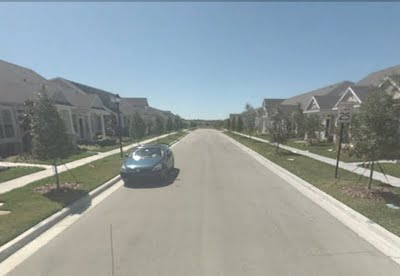 The street is only about 20-25 feet wide, but ponder in this case: what is this street actually for?  On-street parking is unneeded due to the ample garage and driveway parking in the rear, and from the street layout it appears that the most of the fronting streets are duplicative and unnecessary in providing access to the rear alleys.  If the intention were to create a more pedestrian-friendly street, it matters little since, in this large single-use neighborhood ringed by wide arterials, there is nowhere to walk to.  And as for private outdoor space: 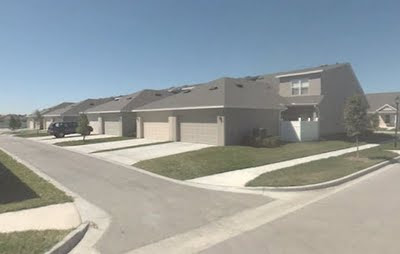 The garages and driveways in the rear have destroyed that greatest of suburban attractions: the grassy private backyard.  And this in mild Florida, where a backyard is a year-round amenity.  The house is now an island surrounded by pavement on all sides, except for the ornamental front and side yards.  Remove the garage, driveway and alley, bring the property line to the midpoint of the alley, and a spacious backyard is created at the sole cost of having to park one's car on the street.

This design idea appears to have caught on in recent years.  While visiting a friend in a very similar development in Birmingham, I was told that the local homeowners association actually prohibited parking on fronting streets altogether!  This officially reduces fronting streets themselves to expensive ornamentation, as symbolic access roads to the functional access roads in the rear.

I'm not entirely sure how to account for this.  Did the ugliness of garage-fronted streets finally become so intolerable that buyers became willing to sacrifice even their backyards for the illusion of a car-free environment in the front?  I don't know and would be interested to hear anyone's thoughts, but for now, one more shot from Orlando: 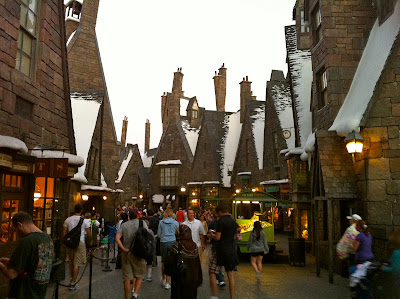 This is the village of Hogsmeade from the new attraction The Wizarding World of Harry Potter in Orlando's Universal Studios, a replica of the movie version of a fictional medieval town from J.K. Rowling's series.  Apparently this one traditional city street and its associated rides have revived the theme park's fortunes, sending attendance soaring by 68% and turning a $35 million quarterly loss into a $45 million profit.  One could argue this success is purely due to the books and movies, but why were those such a runaway success?  Nathan Lewis can tell you.
Posted by Charlie Gardner at 7:22 PM