On Twitter, Cap'n Transit appreciated my focus on Stamford in the previous post, so to continue on the prior topic with an ongoing focus on the 1970s, I'll return to that city to offer some perspective on the past as well as some ideas for the future.

Best known as an office escape for New York-based banks and other companies, the city actually has a history nearly as old as New York itself and, before urban renewal, had a street pattern as intricate as lower Manhattan's old Dutch footways.  The New York and New Haven railroad cleaved the town in the late 1840s, and in the part south of the tracks polluting factories cropped up along the waterfront and canal.  In the 1950s, Interstate 95 ripped another path through the heart of the city, though partly following the railroad right-of-way.

Finally, a massive urban renewal project, initiated in the 1950s but only carried out in full in the 1970s, destroyed the bulk of the city's downtown area and resulted in the demapping of many streets, even including the primary stretch of Stamford's Main Street.  These streets were replaced by high-speed "stroads," and the office buildings that replaced the fine-grained fabric of the city took the form of glass and granite monoliths perched over parking lots, serving as fortresses against the miasma presumably thought to be swirling on the near-empty sidewalks.  A large enclosed three-anchor mall was constructed over several blocks of condemned buildings.

The age of massive urban renewal on the scale that Stamford pursued is over, by and large, some planning projects in Baltimore excepted.  Stamford is unlikely to ever engage in another project of such scope.  As I noted in the previous post, however, a city like Stamford can still use those elements of 1960s and 1970s planning to its advantage if it plays its cards correctly.

The 1970s as I wrote were an early golden age of pedestrian infrastructure as reflected by several key elements which are broadly applicable to today's cause of walkability, although not all are today well-regarded:
In addition to the above, Stamford has in the last 20 years enjoyed a resurgence of the "Euro block" apartment form throughout the downtown area, in addition to an earlier boom in townhouse-over-garage condominium construction.  Although Stamford will not be Barcelona anytime soon, good things can be and should be happening, but the downtown is as car-dominated as ever.  How about a plan for incremental improvement?

The plan I put forward has several components, some inspired by Jane Jacobs, some by Jeff Speck, some by Nathan Lewis and Japanese city planning, and by others too numerous to mention:
In most cases, new streets are built on existing public land and would require little or no condemnation.  Some simply represent streets which were uprooted and de-mapped during urban renewal.  Most vital to these is the continuation of narrow Summer Street down to the UBS building.  The street narrows to only about 16 feet at its southern extremity, and should be continued at that width further south, ideally as a shared space or even pedestrianized shopping street that will provide a safe and attractive walking path from the train station (a moving walkway probably veers too far into parody/Seinfeld territory).  As a 16' street, it could possibly be arcaded as well.  The street would terminate at the UBS building into an existing pedestrian pathway that leads to the train station.

This image, rotated counterclockwise, shows how the new street would appear lined by Euro block apartments and shops, leading with only a couple of curved turns directly to the train station, which has an existing underpass lined with a few shops passing underneath I-95.  This line of shops would be carried across past I-95 and along the path in front of the UBS building, possibly incorporating an anchor store:

Patching Up the Mall

In the previous post, I showed one way the mall could be opened to the street by demolishing one of the car access ramps:

Additionally, entrances could be punched into the mall at various other points on the exterior, as most parking is actually above the mall, and shopping can be accessed at most points directly from the street.

Atlantic Street, onto which this mall entrance faces, should be narrowed from three to two lanes throughout its length with a bike lane added.  A shared space arrangement with bollards (bollards inside the bike lane) would be an ideal treatment.  A new street of 16' or so (not shown) should be run past the facades of these buildings, through the adjacent park, under the mall and into the remnant stub of the old Main Street.  Half of the overly-large park (really a paved square) should be sold off to private parties to construct new buildings along the southern boundary of this new street, leaving a still-large triangular square bounded on all sides by rights-of-way.

The city should also use its power of eminent domain to open new streets and to complete those discontinuous fragments that already exist.  The below map shows existing streets in red, pedestrian paths in orange, and suggested new streets in yellow: 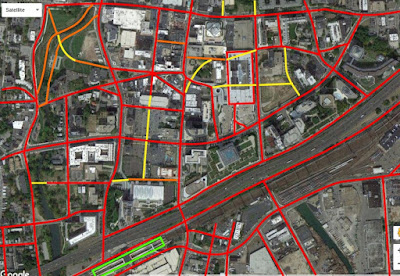 These new streets also include a pedestrian bridge over Mill River at the upper left, the new 16' street referenced before curving through the park, a new arcaded street through the mall, and two streets creating a three-part division of a large, partly unbuilt block at the right.  Other segments have been added here and there, and the continuation of Summer Street is visible in the center right.

Regarding transportation, despite the likely high cost, it may be desirable to create a second stop in downtown Stamford at either Canal or Elm Streets or along East Main Street.  This would help convert the train system into a small localized rapid transit system, and has parallels elsewhere on the line with New Haven's State Street station, Bridgeport's planned second Barnum station and Fairfield's Metro station.

A full infill station, complete with station house, was built in West Haven for $80 million, though the Bridgeport's station's cost appears to be nearly double that.  Since Stamford is the last stop for many express trains, it would not unduly interfere with express train operation.  An Elm Street or East Main Street station serving the Cove neighborhood and providing a secondary downtown route might be very popular and would not require much parking.  There is ample room for it, and the existing overpasses dating from the turn of the century, will need to be replaced sooner or later. 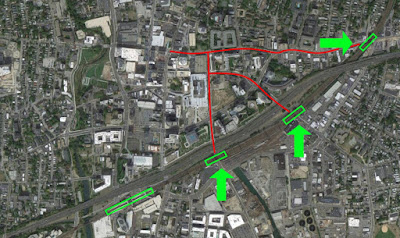 Optimistically, a plan like this would have a ten-year time-frame from initiation of planning to start of operation.

Parking is always one of the thorniest issues in downtown planning, but Stamford, for better or worse, is "blessed" with an abundant supply of garage parking.  In particular, the mall parking lot and the Target parking lot are greatly under-used.  In light of this parking supply, if parking minimums cannot be abolished entirely, the city should offer fee in lieu of parking to any residential developer who secures a parking arrangement with one of these local operators.  The number of spaces required to be secured should be as low as politically feasible.

It goes without saying that on-street parking rates should be dramatically increased in the downtown area.  The city is currently attempting to raise additional revenue by imposing new fees on outdoor dining spaces, yet the parking adjacent to it continues to be greatly underpriced.  Although I am generally opposed to on-street parking in areas with high pedestrian volumes, a Shoup-inspired approach that used increased fees for civic improvements could be a positive change.

What Not to Do

Stamford is currently undergoing a major redevelopment project in the Harbor Point area, a former mixed industrial and residential area in the South End of the city, west of the canal.  Although purportedly the handiwork of planners, the haphazard arrangement of streets and commercial spaces creates an environment which at best, is reasonably pleasant, but which at worst is less than the sum of its parts.

Here are some examples of the decent, the bad and the ugly.  One of the newest areas features a semi-shared space street (interesting) with use of bollards (good), yet the space is overly large (not good) the architecture is completely cold and indifferent (not good) and the scene is altogether too busy with too many plantings (not good).  There are a couple of restaurants along the street to the left with outdoor seating, which greatly helps to enliven the area in the warmer months.

For contrast, here is a street in between two apartments, lined with garages and electric equipment.  This is an unpleasant and even dangerous street to walk down, and it is right off the main park square!

Most unforgivably, in another area close by, is this facade on the local neighborhood commercial main street.  I generally try to steer away from strong language so that readers may make up their own minds, but this is simply atrocious.  The street level must be done better than this.

There are many other changes large and small that one could consider throughout Stamford as a whole, and the city does seem to be engaged in a process of gradually narrowing intersections by bumping out sidewalks, thereby improving pedestrian safety.  With several recent and well-publicized deaths of pedestrians, this needs to be an immediate focus and priority.  Zoning needs to be reformed as well, but that is a post that I have already written.
Posted by Charlie Gardner at 10:53 AM