Let's consider two hypothetical cities. For convenience, I'll call them "Hartford" and "Nashville."  Both are state capitals.  Both are favorably located on bluffs overlooking large rivers and are surrounded by abundant buildable land.  As of 1960, both cities proper had comparable populations, with Hartford at 162,000 and Nashville at 170,000.  Hartford was in 1960 by far the wealthier of the two, being located in one of the richest states of the union and hosting the headquarters several of the nation's largest insurance companies, yet housing costs were reasonable in relation to Boston and New York.

From the standpoint of a 1960 observer, Hartford appeared to have the brighter prospects for population growth.  Hartford's metropolitan area, represented by the county of which it was the seat, was in fact growing at a more rapid clip than Nashville's Davidson County, with a population increase of 28% during the 1950s compared to 24% for Nashville, even though Tennessee at the time had a higher birth rate than Connecticut and Davidson was absorbing heavy in-migration from much of the central Tennessee region.

Around 1960, however, two developments reshaped the governance of both cities.  In that year, Connecticut's abolition of county government went into effect, leaving only the state government and 166 town governments, one of which was the rump city of Hartford, a jurisdiction of 17 square miles.  Only three years later, Nashville moved in the opposite direction, merging itself with the 504-square mile Davidson County and forming a consolidated city-county government.

Since 1960, Hartford County has grown 23%, while Davidson County has grown 40%.  By 2010, Nashville's urbanized area population exceeded Hartford's.  As of 2014, Davidson County with 668,000 inhabitants held fully 62% of the greater Nashville urbanized area population.  By contrast, the city of Hartford had lost population since 1960, and with only 125,000 residents held only 13% of the greater Hartford urbanized population.  Nashville's downtown area is today booming with apartment construction, while Hartford has seen little multifamily development since the 1960s.

The factors in the success of Nashville relative to Hartford obviously are more complex than the arrangement of city government, and involve developments as varied as the economic rise of health care and higher education and the general increase in prosperity in the American south relative to the nation during the mid and late 20th century.  Nonetheless, the relative fragmentation or centralization-by-annexation/merger of city governments is of major importance in how cities are run, regulated and taxed.  For instance, consider that a home in Hartford today bears a tax burden more than three times that of a home of identical value in Davidson County.

For the 2010 Census, the list below shows the top and bottom 15 rankings for the population of cities proper expressed as a percentage of total urbanized area population (out of the top 50 largest urbanized areas): 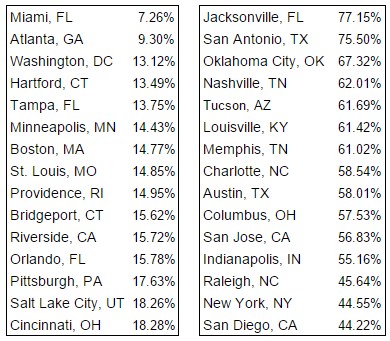 The list of metros with the highest percentages of their urban population contained within their cities includes several of the fastest-growing and most economically resilient cities in the United States: of Brookings' list of the top 10 performing cities over the past several years, five are on this list.  Only one metro on Brookings' list, Salt Lake City, appears on the bottom 15.

Simply because a metro appears on the low end of the rankings, however, does not necessarily mean that it is highly fragmented overall.  Washington D.C., for instance, is surrounded by large and relatively powerful county governments, including Fairfax (1.1 million, 407 sq. mi.), Montgomery (1.0 million, 507 sq. mi.), Prince George's (890,000, 598 sq. mi.), as well as the smaller but populous Arlington County and city of Alexandria.  Others, such as Bridgeport, CT, Providence, RI and St. Louis, MO do have a highly fragmented governing structure throughout the metro area, with a large number of small towns each guarding their own local taxing and land use prerogatives.  County governments fractured into townships tend to replicate, in approximate fashion, the metro areas of non-county states such as Connecticut and Rhode Island.  The proportion of people living within the central jurisdiction is suggestive of degree of fragmentation, however.

I can hear the reader say right now: but correlation isn't causation!  While that is certainly true, and while I also bear in mind Jane Jacobs' comment that a region "is an area safely larger than the last one to whose problems we found no solution," those who have studied this issue have found definite advantages to a more centralized form:


There are disadvantages too.  Very local governments, for better or worse, can be (or at least are perceived to be) more accountable to the individual citizen.  These governments may have long histories and impart to an urban area much of its character.  Some of the advantages of the centralized form can be overcome through adopting elements of a centralized form, such as pooling of certain services, without relinquishing all local authority.

Still, where all else fails, consideration of more drastic measures may eventually become necessary.  In its election just a month ago, Hartford elected a new mayor, Luke Bronin, who defeated the incumbent in an earlier primary.  Although the local paper has wished him well, it closed a post-election op-ed with words that may soon need to be uttered more forcefully:

"The steep challenges facing Hartford and Bridgeport [which also elected a new mayor] raise the question of whether these cities, which have heavy costs and little property to tax, can continue to be viable. The canary in the coal mine on that may be New London, where Democrat Michael Passero, a city council leader and former firefighter, was elected to replace Mayor Daryl J. Finizio.

At seven square miles, New London is the second smallest geographical municipality in the state. Like Hartford and Bridgeport, it bears a disproportionate amount of its region's social costs.

If the new mayors cannot make these cities work, we shall have to rethink them."

Whether Connecticut has the capacity to "rethink" the organization of its centuries-old towns is a reasonable question, as is the question of whether any such reorganization would work to solve central city ills.  That the question is presenting itself at all, however, is indicative of the scale of the problems at hand.
Posted by Charlie Gardner at 8:11 PM