In a prior post, I examined minimum lot sizes as a general concept with reference to a few examples.  Another way of approaching the subject is to examine regional and national patterns and trends on lot sizes.  Although the subject doesn't get a great deal of attention, and Census information is not as detailed as one might like, it is possible to cobble together some statistics.

Based on data from the MLS as compiled by Realtor.com, here is a map showing the median lot size of properties offered for sale in each state (for 2012).  As we'd might guess, the patterns reflect both complex historical influences as well as current degree of urbanization: 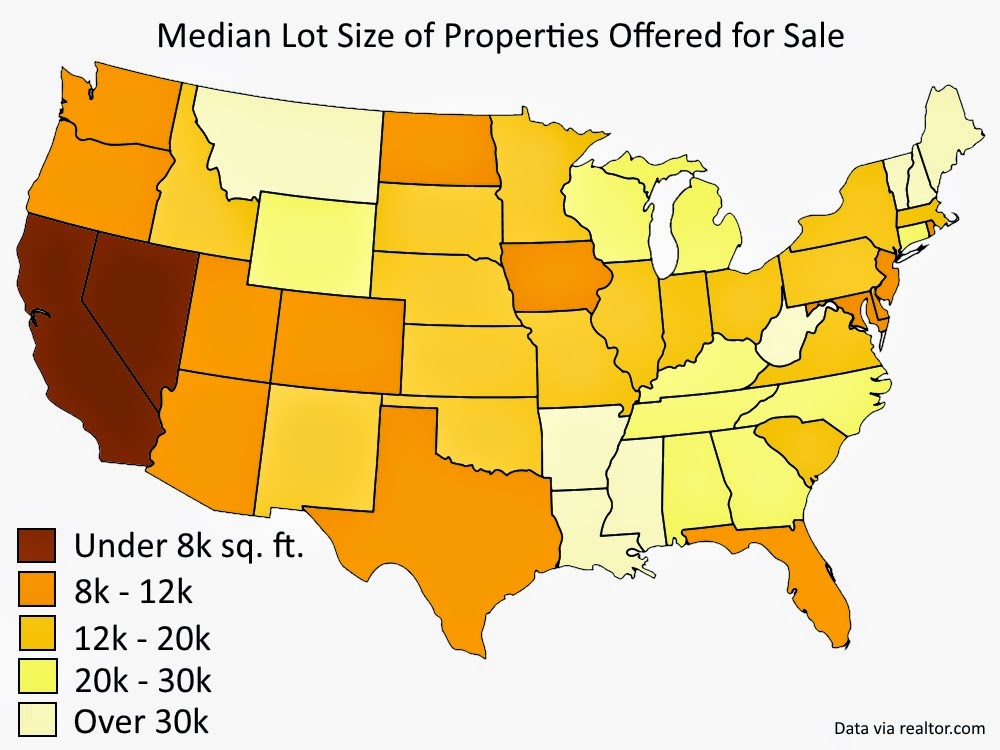 More relevant to current debates over urban expansion and development are the median lot sizes of new homes, as compiled by the Census.  Unfortunately, the data is not broken out by state, but the regional trends are nonetheless interesting and helpful:

As far as I can tell, rather than primarily being the product of planning and development policies, these differences are substantially driven by agricultural land values as well as groundwater availability.  Federal land ownership may also play a role in some western states.  A map of well-water supply is below, showing a fairly good correlation with lot size:

The outlier value for New England in the median lot size map seems to fit the well-known historical account of agriculture in that region, where after the arrival of railroads carrying midwestern grain in the later 19th century, farms were rendered unprofitable and were abandoned en masse, leaving only stone walls -- 250,000 miles worth -- through new-growth forests as a sign of their former presence.  During the height of this abandonment in the 1890s, some New England counties, like Tolland County in Connecticut or Rutland County in Vermont, actually declined in population.   Post-1950 tract homes in New England, built in forested, rocky terrain, prefer to sit Walden-like in their own little forest clearings, as though each homeowner were an 18th century pioneer carving out a homestead in the wilderness.  Much of New England, as William Fischel also notes in Zoning Rules!, with a wet and cool climate, is heavily well-watered, with the result that homes need not be clustered closely together.

Where agriculture yields the highest-value crops on a per-acre basis, such as in the fruit groves and orchards of Florida or California, the smallest lot sizes are found.  A list of the densest urban areas in the United States is surprisingly dominated by small California cities, such as Davis, Woodland and Delano, most of which sit within the fertile farmland of the Central Valley.  In Florida, meanwhile, the rapid development of The Villages retirement community has produced some of the densest single-family subdivisions in the entire country:

This ingenious map shows the distribution of cropland and pasture by type throughout the US, highlighting the concentration of agriculture in certain areas and its near-absence from wide swaths of the country, including the majority of New England, much of the southeast apart from coastal lowlands and the mountain and desert west:

In most of Europe and Asia, by contrast, pre-industrial towns and cities of necessity grew in immediate proximity to valuable agricultural land:

A few exceptionally large cities of the ancient world imported grain by ship, but for the most part cities were dependent on their agricultural hinterlands.  Until the early industrial era, the high value of this land for crops probably did not impose significant constraints on city expansion (as opposed to the limits of sanitation, transportation, the need for a defensible perimeter, etc), but in an age of rapid population growth and urbanization, the cost of land acquisition gained greater significance.

Where land has little value for agriculture, we should not be surprised to see greenfield development taking lower-density forms.

Posted by Charlie Gardner at 3:37 PM