[Updated 8/17, 10:00 p.m.] Throughout the week, I'll be making the most of a trip to the Florida coast to post on several of the New Urbanist towns and developments in the area from an 'Old Urbanist' perspective. Today's piece examines Seaside, FL.

For a person with New Urbanist (or Old Urbanist) leanings, a visit to Seaside feels a bit like a pilgrimage to a sacred site.  Although the merits of the town have been debated for years, its significance in the history of American urban planning is undeniable.  As one of the earliest steps in the evolution of the New Urbanism, which wouldn't formally arrive until more than a decade after the town's 1981 founding, Seaside is an intriguing glimpse into the origins of the movement.  For me, it was a chance to examine the planning decisions made at this early juncture, including those that were repeated in later New Urbanist developments, and those which, for various reasons, largely fizzled out.

First, though, the intentions of the designers, in their own words:


"Seaside is widely acclaimed, financially successful, and almost completely built-out. It has become a symbol of the New Urbanism, exemplifying the movement’s underlying principles, which can be applied to all urban conditions: the built environment must be diverse in use and population; it must be scaled for the pedestrian yet capable of accommodating the automobile and mass transit; and it must have a well defined public realm supported by an architecture that reflects the ecology and culture of the region."

On the count of architecture, the assessment of a 2002 New York Times article that "the best part of Seaside is the houses" is not too far off the mark, though the planning achievements are ultimately more noteworthy.  The tastefulness, elegance and attention to detail in many of the homes  is astonishing. The achievement of creating (and encoding) a regional vernacular which is capable of endless varied repetition is truly remarkable. Notably, the style appears to have carried over into the local building industry, as "Seaside-style" homes are cropping up far north and south of Seaside itself.

Urbanism is distinct from architecture, however.  On that count, does Seaside deliver on its promise of an environment "scaled for the pedestrian yet capable of accommodating the automobile"?  Let's look at a typical Seaside street: 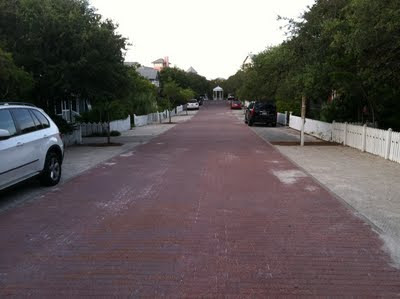 From white picket fence to white picket fence, the street spans 40 feet (a 20 foot roadway, plus two 10-foot parking lanes).  Homes are set back another ten feet or so, making for a total distance between facing buildings of around 60 feet.  Thanks to attractive paving and extremely light traffic, the street is not hostile to pedestrians, but this is clearly an environment scaled for the automobile.  Cars were observed driving at high speeds through the neighborhood, a problem which has been addressed by marking intersections with all-way stop signs. Yet this decision actually seems to be aggravating the problem of speeding.  I witnessed several drivers roaring up to stop signs, coming to rolling stops, then gunning the accelerator in frustration.  That Seaside has lately been overrun by cars has not escaped notice.

Interestingly, Seaside for the most part has no rear alleys.  This New Urbanist calling card is present only in the newest areas of the town. On the above street, parking spaces are tastefully integrated alongside the single family homes – a far more economical solution than rear parking garages, but one which is undermined by the addition of the two additional parking lanes along the brick roadway.  Do vacation homes really need three parking spaces each?  This in excess of most municipal standards for single-family homes, which generally require no more than two spaces.

In the area along the beach south of Highway 30A, however, a handful of really narrow streets do appear, and these are some of the most beautiful and memorable parts of the town. 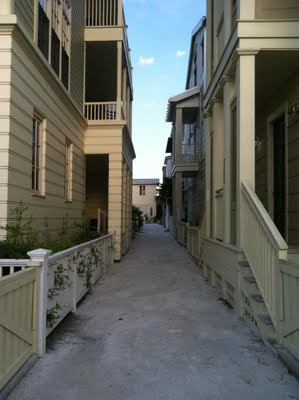 This lane is so narrow that even biking feels inappropriate and intrusive – an excellent indicator of intrinsically pedestrian-centric design.  The sand-and-gravel surface physically impedes bikes as well.  Although lanes like this feature only in the small area south of 30A, an extensive series of extremely narrow paths, invisible in any aerial view, run in place of where rear alleys might otherwise appear through most other blocks: 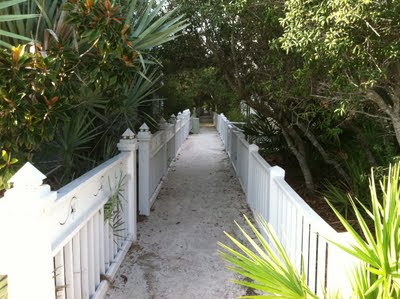 These paths, apparently introduced at the suggestion of Léon Krier (whose Classicist architectural fingerprints are evident everywhere you look), run in between rear property lines in most blocks.  The scale is delightfully human-centric and fine-grained.  The paths are not really functionally necessary, but instead seem to be a foil to the wide streets, a means of providing an additional layer of connectivity that offers the same thrill of unexpected discovery that accompanies the very narrow traditional urban lane, a thrill that the wider streets do not offer.  Notably, though, this is not a design feature that has reappeared in most other New Urbanist developments.  By no later than 1992, the New Urbanist pendulum had swung in favor of rear alleys, and the front parking pads and footpaths largely gave way to the detached rear garage, as at Kentlands, although pedestrian paths continued to appear in a much-reduced role. 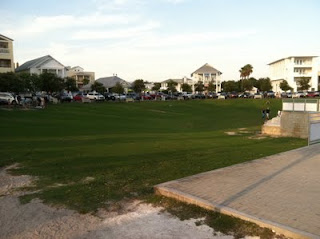 The commercial portion of the town reflects an eclectic mix of influences.  A sloping, semi-circular grassy amphitheater, in scale and form reminiscent of the Piazza del Campo, occupies the center.  A lack of shade or any real seating area leaves this important civic space a sun-baked void from 10 a.m. to 5 p.m. on hot summer days (perhaps an unfair critique, as the same goes for many an Italian piazza, too, except the Florida panhandle has not yet embraced the concept of the afternoon siesta).  The space is so vast, meanwhile, that even four-story buildings around the perimeter fail to define it. 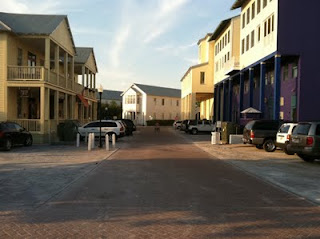 The area behind this first row of buildings feels somewhat neglected, with over-scaled buildings, wide streets and little attention to detail.  Few people are out and about  in this area.  Much more interesting, again, is the area along the beach, which has a densely-packed cluster of one and two-story restaurants and shops with pedestrian paths running through and between them.  One gets the sense that there really are two Seasides: the traditionalist village south of 30A, with its pedestrian paths and human-scaled buildings, and the vaguely 19th century lookalike north of the road.


[8/17 update: After returning to Seaside at 9:00 p.m., I'm more confident about my earlier observations of the area.  At that time of day, activity is heavily concentrated around the beach-side restaurant and retail area.  In recognition of this, the town has introduced numerous mini-trailer eating establishments (presumably seasonal) along the southern perimeter of the amphitheater, facing across 30A toward the small-scale shops and eateries on the other side of the road.  Even at midday they are running a steady business (see below):] 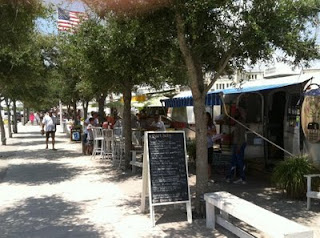 The exception is a beautiful square framed by Seaside's handful of townhouses -- the feel is part Charleston, part French Quarter: 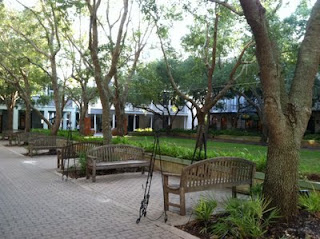 As to the big picture issues of street layout and population density, a few words from Christopher Alexander, who is generally very positive about Seaside:


"First off, there is a humane environment, pleasant, avoiding many of the mishaps and ugliness of modern American development. It has charm. It has some atmosphere. ... In order to achieve this very large, and humane effect [at Seaside], Andrés [Duany] has used what is a partly mechanical method. He has therefore been forced, in this first round of experiments ... to make a somewhat mechanical version of the ideal.

It is the nature of this 'mechanical' aspect which has to be examined carefully.

In essence it consists of making a rigid framework, and allowing, then considerable individual variation within it. But the carcase, the street grid, is rigid: it does not arise from the give and take of real events. In this regard it is unlike an organic community. It is as if one were to have a rigid mechanical skeleton and hang variational flesh on it. That is not the same as making a coherent whole, in which the public space arises organically from detailed, and subtle adaptations to terrain, human idiosyncracy, individual trees, accidental paths, and so on. ...

The subtle mechanical character which underlies the production of the street grid, is visible, though, in a more disturbing quality. Occasionally one hears that there is something 'unreal' about Seaside. Some of it is carping. Perhaps jealousy. But there is something about this comment that is real, and which goes to the very root of our current inability to make living space in towns."

The street layout at Seaside melds together a concentric ringed pattern with a typical 19th century grid of blocks generally 200' wide and 400' long.  The influence of John Nolen, and in particular his plan for Venice, is evident.  Yet, unlike in Nolen's plan, the individual street segments are resolutely straight, refusing to bend or meander (with a handful of exceptions).  The block lengths, too, are of predictable dimensions.  I think this is the "subtle mechanical character" which Alexander is referring to.

A perfectly straight street, after all, tells us no more than: "A planner drew me with a T-square, and a surveyor marked me out."  We intuitively sense this, since the march of human feet over ground will almost never proceed in a perfectly straight line.  Is it more efficient than a street which emerges from "detailed and subtle adaptations to terrain"?  Not necessarily – it may be less responsive to topography and may require more grading, as was the case with the grids of New York or San Francisco.  The perfectly straight street itself is a mechanical, or utilitarian aesthetic (to borrow Nathan Lewis' terminology), the aesthetic of the professional surveyor whose instruments are designed to mark straight lines and right angles, whether with the ancient groma or the modern laser theodolite. 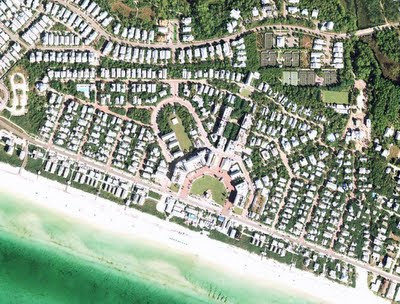 The grid appears a preferred alternative to the modern suburban streets which meander purely for aesthetic effect, as did the early suburban plans such as Riverside, and in a true utilitarian sense that is probably correct, as the grid provides better connectivity and is easier to navigate.  But in comparison to an organic plan, especially in a town of small size, the advantages as against the process Alexander describes may be less clear.

In terms of density, Seaside's use of single-family homes on small lots with modest setbacks and small backyards (and with very few grass lawns in evidence) is a separate achievement in and of itself.  Although the houses are large and gracious, densities of about 6 units/acre are achieved.  Backyards are considerably smaller than in the typical 19th century streetcar suburb.  Overall, Seaside's density, in high season, appears to rise to as high as 12-14,000 people per square mile.  This seems to be only slightly less than at Kentlands, despite Kentlands' much greater use of attached housing, perhaps due in part to the presence of space-devouring alleys in the Maryland development.

Overall, despite the critiques I've included here, I found Seaside to be more impressive than I had expected.  The architectural achievement alone is inspiring, and one's hat has to go off to Duany and other architects who, during a nadir in design in the late 1970s and early 1980s, recreated so much beauty in the built environment.  The town continues to improve and refine itself with infill and new design ideas.  The area south of 30A, meanwhile, hints at a genuine traditionalist approach to urbanism.  It is not an approach that has characterized most subsequent New Urbanist developments, however.

For the next installment in this series, I'll look at Seaside's successor: Rosemary Beach. 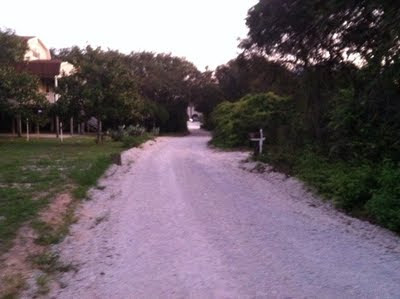 In response to Joseph's comment, the above photo is of Thyme Street, two blocks over from where Seaside officially begins, looking toward Highway 30A.  This is characteristic of many of the residential lanes leading off 30A.  The sand-and-gravel surface is about 16 feet across, and traffic naturally proceeds at 10-15 mph.  Setbacks are much greater than at Seaside, however, with the result that houses are about the same distance apart.
Posted by Charlie Gardner at 4:39 PM