Throughout the week, I'll be making the most of a trip to the Florida coast to post on several of the New Urbanist towns and developments in the area from an 'Old Urbanist' perspective. Today's piece examines Rosemary Beach.

Rosemary Beach's origin dates to 1995, a time when the New Urbanism was in rapid ascendance.  The Congress for the New Urbanism had been formed two years before, Seaside and Kentlands had already enjoyed great success, and as real estate began to enter its 10-year boom period work was abundant.  Given the chance to design another coastal Florida town, DPZ might have simply copied Seaside's successful formula, but as the designers themselves explain, they chose not to:


"Fifteen years after the design of Seaside, Duany Plater-Zyberk & Company was given the opportunity to return to the Florida Panhandle to create another new neighborhood on Scenic Highway 30-A. A New York-based investment firm had purchased a 52-acre property just seven miles east of Seaside, hoping to reproduce that project’s success. Given this objective, the clear mandate was to differ from that earlier model as little as possible. However, the opportunity to revisit the concept of the coastal resort town after fifteen years of experience allowed the design team to apply techniques that distinguish Rosemary Beach from Seaside in several fundamental ways. ...

Since most residents of Seaside use their cars rarely, the plan of Rosemary Beach introduces a rear alley system so that cars can be parked in garages that are not visible from the street. About half of these garages are topped by granny flats, small apartments that can be rented out to help finance the construction of the main house. The presence of alleys also means that not every house needs street access at the front, allowing many of the smaller streets to be replaced by boardwalks. The wooden boardwalks, inspired by northern seaside towns like Fire Island, allow direct pedestrian to access the beach and bring the beach experience deep into the plan. Two public squares on the southern boundary further focus the neighborhood’s activity on the ocean."

So right away we have a fundamental reconfiguration of the street network -- or do we?  In fact, both Seaside and Rosemary Beach share the same pattern of having a paved street on one side of homes, and a pedestrian path on the other, as can be seen by comparing the photos below with those from Tuesday's post:


So perhaps no "alley" has been introduced after all. Only the names have been changed.  The logic of the decision to add garages is a bit obscure: because cars are used rarely, does it follow that large and expensive garages should be built to accommodate them?

The garage-facing side with its 30-foot wide flush road surface and lack of green space presents a far more traditional urban appearance than the side that has now been designated the front, yet the designer does not appear to consider this a virtue, noting approvingly that the garages "are not visible from the street," in spite of the fact that we've just been told that in many cases there are no streets, only boardwalks.  Still, the arrival of the garages has, intentionally or not, created a traditionalist feel distinctively different from that of Seaside along certain of the so-called alleys, albeit one which depends heavily on the existence of homes above the garage to enliven and humanize the space.

The suggestion that the boardwalks were inspired by Fire Island is intriguing.  Let's take a quick look at Fire Island's plan: 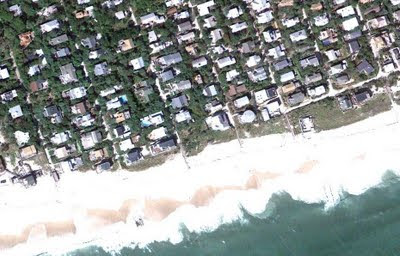 Do you notice anything unusual here?  Access to Fire Island homes is only by boardwalks and pedestrian paths for a very simple reason, as the Fire Island website explains:


"There are no paved roads on Fire Island and only service and emergency vehicles are allowed on the island. Free of cars, traffic, pollution, and noise Fire Island offers a peaceful getaway unlike any other vacation destination. ... Walking, biking, and golf-carting are the modes of transportation and help to preserve our island’s natural beauty."

Here is a Fire Island "street," "alley," call it what you will:

Now, like Rosemary Beach and Seaside, Fire Island is largely a vacation getaway, but one which accommodates over four thousand housing units containing a summer population in the tens of thousands, all without cars!  Could that be a viable planning model?  The design statement for Rosemary Beach shows, I think, the ambiguous role of cars in New Urbanist projects.  It is understood that cars are not an asset to the development and the feel of the community, yet they are guiding fundamental design choices.  The mode of accommodation changes, but this unresolved design tension persists.  The car-free option remains unexplored despite its obvious viability in the context of vacation destinations.

Moving on: here is the main commercial corridor of Rosemary Beach: 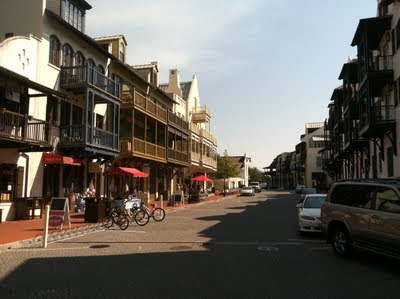 The architecture is of an outstanding quality, even exceeding the standard set at Seaside.  Each building shows a meticulous attention to detail and proportion in every part, and in its relationship to its neighbors (complaints about New Urbanist developments such as these often point to the alleged "fakeness" of the architecture, as though use of historicist elements and detail were somehow insincere.  I reject these arguments completely -- architectural beauty is not only a legitimate but highly important end, no matter how or through use of what styles it might be achieved).  There is a wonderful lack of large surface lots or garage parking -- a tremendous improvement over almost any other development in the surrounding area.  Notice again, though, two features of the design that have been seen before in Seaside: an excessive width of the street, and a reappearance of Christopher Alexander's "subtle mechanical character" in that the street, although angled NE/SW in defiance of a strict orthogonal plan, is perfectly straight, and of a regular width along its length. 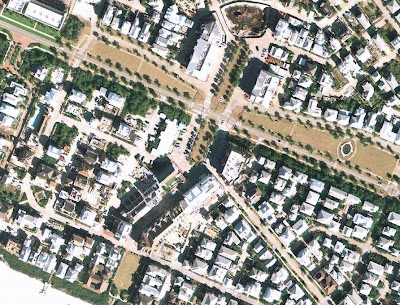 The streets of Rosemary Beach do bend a bit more than those in Seaside, however.  The overall plan has a pleasing asymmetry, yet the surveyor's aesthetic is still evident here.  The 19th century pattern of large-scale, attached commercial buildings and detached single family homes persists, although in an extraordinary architectural form that is a delight to explore and take in.

A final point concerns the drastic difference in the way Rosemary Beach and Seaside incorporate Highway 30A (which both towns span) into their designs.  At Seaside, establishments are set back only 15-20 feet from 30A, which, despite its name, is only a 22-foot wide roadway with no shoulders.  Seaside does not shy away from this road, but encroaches upon it and tames it, inducing drivers to slow naturally in response to pedestrian activity.  Rosemary Beach, on the other hand, drops everything and runs away: 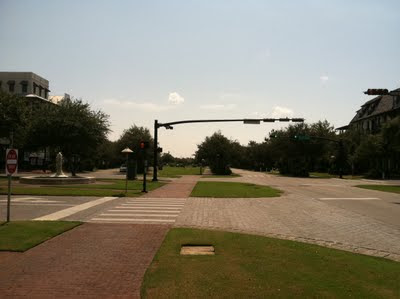 At the right hand side is the 22-foot wide 30A, appearing wider due to gigantic turning areas.  Grass buffers extend for 20 feet on either side, followed by ten-foot bike paths, and then another 35 feet of grass for a grand total of 150 feet of sun-baked open ground between buildings at the narrowest point.  On either side, the grassy buffers widen, creating a yawning gap of over 200 feet.  There is no shade at the crosswalk.  At high noon, the feel is of a no man's land, and I saw very few people bold enough to attempt this crossing on foot.

Why Rosemary Beach chose to abandon Seaside's approach and turned its back on this humble state road as though it were the Cross Bronx Expressway, I don't know.  But it need not remain that way -- a solution is as easy as constructing additional homes and shops to link the existing areas north and south of the road.

Overall, Rosemary Beach feels like a place torn in two directions: between a traditionalist European village and a 19th century American resort town with its boardwalks and scrub plants, and between excluding and indulging the automobile.  The clash produces an interesting, if not entirely harmonious, result.  In terms of creating a consistent style and successfully integrating the automobile, Seaside comes out on top -- which is not so much a critique of Rosemary as a compliment of Seaside.

In the next post I'll take a look at the third and latest of DPZ's towns along the coastline -- Alys Beach.
Posted by Charlie Gardner at 7:36 PM