Throughout the week, I'll be making the most of a trip to the Florida coast to post on several of the New Urbanist towns and developments in the area from an 'Old Urbanist' perspective. Today's piece, the third and final, examines Alys Beach.

Alys Beach, even in its current embryonic form, is the most promising New Urbanist project of the three I've visited over the past week.  Promising, in that it discards the New Urbanism's 19th century American small town planning model in favor of an unapologetically traditional format, at least in part, and has the potential to show the way forward for subsequent developments.  However, the issue of cars and parking -- the planning challenge of the day -- remains in flux, and it's not clear whether Alys Beach has made much of an advancement in that key area.

The project is the newest of the group, having been designed in 2003.  In a difficult economic climate, less than 20 percent of all lots have been sold, with even fewer homes actually built.  The developer (Birmingham-based EBSCO) has limited initial sales to a third of the project area and has engaged in very little speculative building.  Homes are largely custom built by purchasers of individual parcels.  With so little completed, there wasn't much to photograph, but enough has been constructed that it's possible to extrapolate the built areas to the remainder of the development.  Encouragingly, several homes were under construction at the time I visited.

The description of designer DPZ focuses mainly on architecture rather than urban form:

"In the tradition of nearby Seaside and Rosemary Beach, Alys Beach will be a model resort town-- a place where the best concepts in town planning are applied to create an ideal urban experience in harmony with nature. ... Seeking to achieve an overall feeling of calm and simplicity for the town, the design team turned to a number of sources for inspiration. A trip to Bermuda led to the discovery of the perfect architectural style for the project. The simple volumes of whitewashed masonry and stucco typical of the style possess an uncomplicated, organic beauty. Buildings are grouped into small compounds and unified by perimeter walls, which are higher and more formal in the urban zones, lower and more rustic in the rural areas. The Bermuda style is combined with a patio house type that originated in Antigua and a courtyard building type that came from California."

The courtyard house is a traditional form, and the streetscape that results from these attached U-shaped dwellings is one which is unmistakably traditional as well: 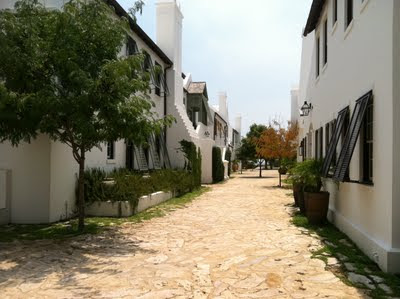 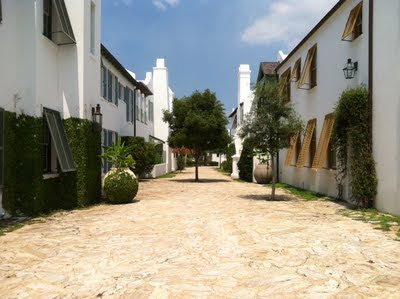 There are several elements here which are unprecedented, or nearly so, for the New Urbanism.  The exclusive use of attached residential dwellings -- of an outstanding quality -- is one. The flush street surface, with no sidewalk or lane differentiation, is entirely for the person on foot (promotional materials show children biking down a similar street, but when I tried to do the same it somehow did not feel appropriate -- the natural urge, reinforced by the level of architectural detail and glimpses into interior courtyards, is to walk the bike).  The "subtle mechanical order" of Seaside and Rosemary Beach is avoided by a gradual widening of the street as it leaves a public square and by a use of a fina-like design concept in which buildings extend outdoor stairways, window shutters and large planters two or three feet into the right of way.  The street, less than 30 feet at its widest point (lower image) narrows to under 20 (upper image).  The combined effect is entirely traditional, and the resulting streetscape 100% "place," even if it could stand to be narrowed just a bit more.

To observe how Alys Beach deals with the automobile, take a turn down a narrow lane leading off the street in the above photos (an appropriate width for the two-story courtyard format): 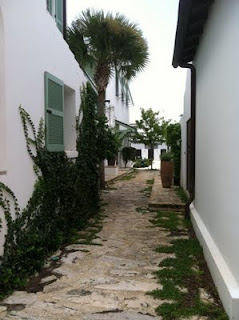 At the end of this lane, behind the courtyard homes, we encounter ... a parking lot, complete with nature band-aids, to borrow the terminology of James Howard Kunstler: 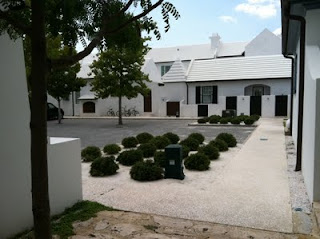 Turning left to face the lot: 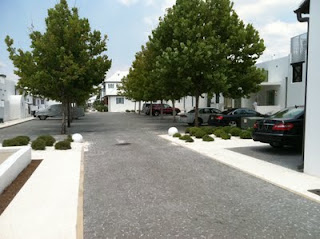 It's an unusually nice parking lot, but a parking lot nonetheless, making car storage more prominent than at either Rosemary Beach or Seaside.  There appear to be at least two spaces provided for each courtyard house.  These common lots are a fundamental design element of the Alys Beach plan, appearing below as the tree-dotted areas. 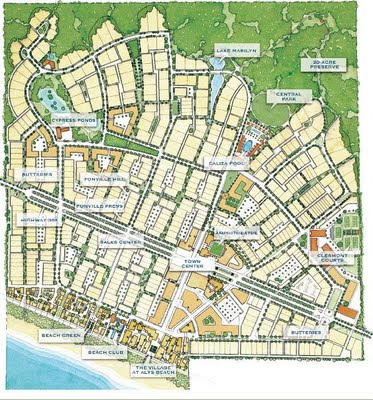 In this plan, we see that there are actually three different types of street: the pedestrian street, vehicular ways with raised sidewalks, and the paths leading between and around the network of parking lots.  Only half of the courtyard homes open onto pedestrian ways, while two thirds of the street network is primarily or exclusively for the car, a proportion similar or greater than at Rosemary Beach.

An example of one of the vehicular streets is below, showing a 30-foot right-of-way: 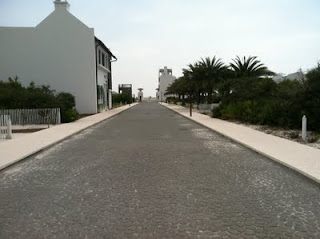 The building lots in this area have a refreshing variety that characterizes the development as a whole, with dimensions including 60'x50', 30'x80' and ranging up to 40'x110'.  Zero lot line designs are the norm.  On the narrowest lots, suggested designs show a large townhouse, abutting the street, separated from a loft unit at the rear of the lot by a spacious courtyard (the photo shows such a design).  Unlike the mini-cottages of Seaside or the granny flats of Rosemary Beach, these loft units will not be available for separate rental, according to the sales office.  One doubts how much use they are likely to receive.

The area immediately adjacent to the beach incorporates a somewhat more irregular, if not organic, plan, and it turns out this area was not actually designed by DPZ, but by Porphyrios Associates,  the firm of classicist Demetri Porphyrios: 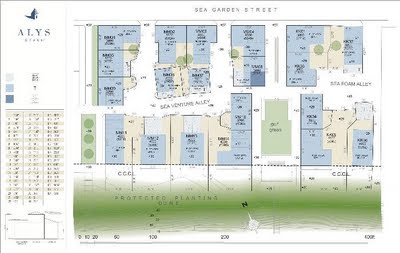 In this area, lots sizes are as small as 30'x40', yet the insistence on providing two parking places per unit prevails even here, in the form of on-site parking rather than common lots.  The overall plan provides for increasing lot sizes away from the beach, but it's not clear if this distribution actually reflects market demand since -- as the very helpful realtor at the sales office informed me -- subdividing lots will not be permitted.  The smallest lots seem undersupplied, while the 40'x110' lots, offered at such high prices, look like strong candidates for partition.  The designer explains that the distribution of lot sizes is attributable to the "urban-to-rural transect," yet the practical effect is to flatten the price distribution for lots, compensating for lower land values farther from the beach by setting larger minimum lot sizes.

One final point: like Rosemary Beach, Alys Beach shies away from embracing Highway 30A, adding large landscaped buffers with blocking hedges and broad bike paths and/or access roads which are nearly as wide as 30A itself.  At 120 feet between facing buildings, the gap is not quite as large as at Rosemary Beach, but given the modest and traditional scale of the pedestrian paths and elegant buildings, the contrast is even more jarring.  Although traffic noise from the road was a design concern here, the effect of drawing back from 30A in this manner will be to encourage higher traffic speeds, partially negating the intended benefits of the setback. 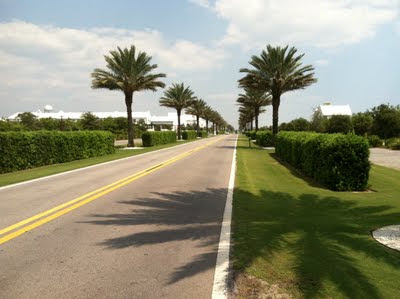 Despite quibbles with street layouts and lot dimensions, Alys Beach appears to be a true breakthrough for the New Urbanism.  The architecture hits a high note of elegant simplicity, the pattern of attached courtyard dwellings is a welcome change, and the presence of narrow, pedestrian-centric streets shows a confident embrace of traditional urbanism.  One nagging concern, though, is whether this community represents a turning point in design, or is simply a magnificent one-off, the product of a particular architectural vision that is unlikely to be repeated.

The issue of cars and parking, though, needs some creative rethinking.  In a community envisoned as "a place where our feet will take us where we want to go," as the Alys Beach exhibit proclaims, surely the designers imagined feet taking residents elsewhere than the driver's side door of a conveniently-parked SUV.  Nathan Lewis in previous comments suggested the idea of a single parking garage at the edge of the community from which residents could proceed on foot, bike or golf cart -- an approach which has been implemented in other resort towns, and which is especially feasible in Florida's mild climate.  Seaside's founder Robert Davis suggested valet parking some years ago to deal with a crush of cars there.  There are many potential alternatives, but a community explicitly designed around walking, the notion of prioritizing access to the car above all else must be reconsidered.

That about wraps up my look at these three fascinating communities on the Florida panhandle.  Thanks for reading!
Posted by Charlie Gardner at 10:47 PM