Is the Decline in the Homeownership Rate Even Greater Than Thought?

One of the most heavily reported stories of the post-housing bubble economy has been the decline in the American homeownership rate, which has supposedly fallen to levels not seen since the days of the Lyndon Johnson administration.  Although ownership data is often broken down every which way, including regionally, across ethnic and income groups, over time, by immigration status and by age bracket, one analytical quirk I've noticed is that the non-age comparisons are rarely themselves controlled for by age.

This is highly significant, since homeownership is, obviously, heavily correlated with stage in life.  While only around 33% of 29-year-olds own homes, by age 39, this number leaps to around 49% (according to age bracket data from the 1990s to present).  This fact has major consequences for comparisons among nearly every demographic group, but even more so for comparisons over time.  How so?   Consider that a major age-related change since the 1940 Census has been an increase in the median age of around 10 years due to a decline in the birth rate and a substantial increase in life expectancy.

What is the significance of these changes for the homeownership rate?  The chart I prepared below uses averages of ownership by age bracket for 1994 and 2014 to estimate interval changes and make a complete graph showing that, in general, the rate increases until around age 66 (one would think related to post-retirement home sales) and then gradually tapers off thereafter, while still remaining well above the overall average. 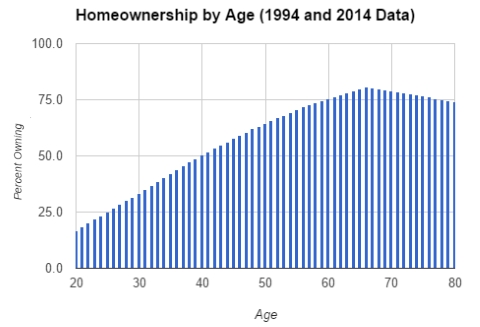 As a result, the older a population grows, the higher its homeownership level should be, all else being equal.  Intuitively, it should be shocking that today's homeownership rate is comparable to that at the height of the baby boom era, when the national median age was only 28.  The Census Bureau has apparently made some adjustments to more recent ownership data to reflect changes in age structure, but I was interested in doing the same for the decennial data going back many decades.

The data has been adjusted to account for 1) changes in the median age, normalized to 2014, to reflect that an older population is centered around a much higher ownership level, and 2) changes in the life expectancy independent of median age, to reflect that the older people live, the higher the homeownership level is likely to be.  First is a plot of the non-adjusted decennial Census data (plus 2014), showing the familiar pattern of a large jump in the 1940s due in part to wartime rent controls, a slowdown in the 1960s, and a general stagnation since that time. 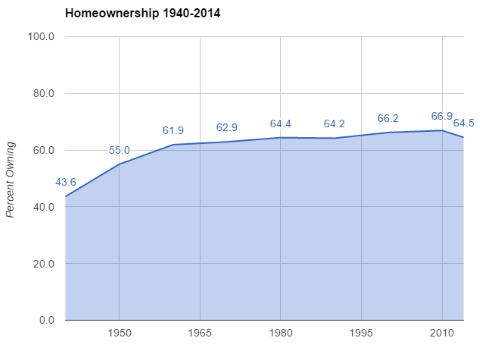 Once we account for the demographic changes, however, it becomes obvious how the aging of the population has masked a major decline since 1970.  The chart below shows the data adjusted for change in median ages only.  Note also how the slowdown in the 1960s has disappeared and been replaced by a substantial increase, as the population was growing younger during that time.  This is more consistent, I think, with the conventional wisdom that the 1960s were a boom time for new buyers as much as the 1950s were. 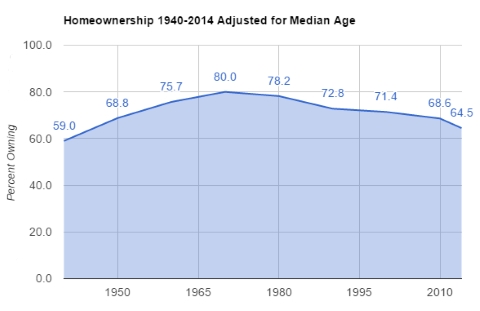 Finally, if we account for life expectancy as well, the trends are further amplified, showing that, in age-adjusted terms, today's homeownership rate is lower than that of 1940, which was itself a low point only a little above where it had been in the depths of the Depression.  A peak is reached around 1970, after which there was and continues to be a decline (the upward blip in the mid-2000s is not represented here). 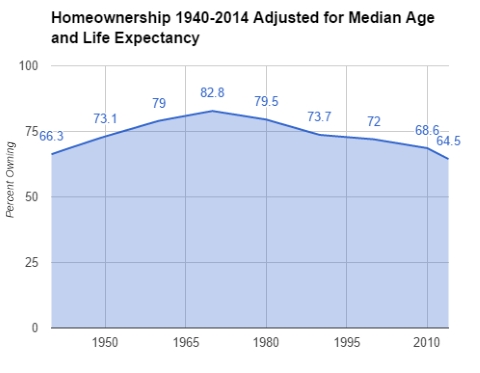 My attempt at analysis here is definitely not the last word in examining this data, and no doubt there are flaws, but it at least leaves open the possibility that today's homeownership rate, in the context of age adjustments, is lower than it has been for a very long time, at least as long as 80 years and perhaps as far back as 120 years or more.  With more data on earlier Censuses and a more rigorous approach more refined and complete results could be calculated, but I would doubt whether the overall picture would be greatly different.

The question as to why homeownership peaked around 1970, in these charts, and declined thereafter, is one which has been discussed in many other and related contexts.  Nathan Lewis has written extensively about the abandonment of the gold standard.  Ben Ross has discussed the changes in land use policy in the 1970s, including the rise of environmentalism, which threw up new barriers to development and reduced the supply of new housing coming to market.  Seeking a full explanation would be far beyond the scope of this post, but I think it is noteworthy that the results are broadly consistent with other economic markers, including inflation-adjusted income.

Finally, it it may be interesting to compare these trends with those of Europe, as shown on this graph which I grabbed from Twitter (via Antony Slumbers): 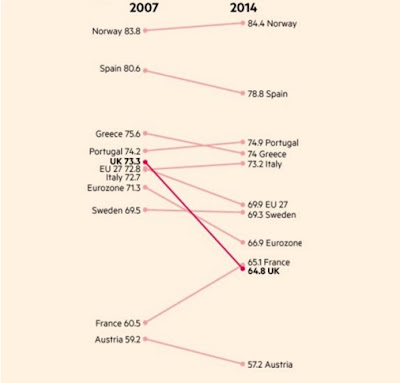 Although the US continues to have a lower homeownership rate than the Eurozone, and far lower than many individual countries, I suspect this difference may disappear or even reverse once median ages are taken into account (the median age of the Eurozone being over 41).

Spreadsheet with data and charts here.

Posted by Charlie Gardner at 4:40 PM