A recent article by Lyman Stone makes the argument that the return to cities observed during the late 2000s, rather than being primarily a reflection of increasing preferences for urban living, was a temporary phenomenon caused by a bubble in suburban real estate which for a brief time made city renting significantly less expensive than suburban buying.  Under this theory, there was no great change of preferences among the so-called millenial generation or others, but only a temporary price inversion caused by fleeting and unsustainable cost factors.

The general idea that land rents are higher toward city cores, and lessen in a concentric pattern outwards from the center, is not new.  As the "bid rent theory," it was developed by William Alonso in the 1960s, and has applicability to cities from the distant past all the way down to the present.  Modifying but not necessarily contradicting this theory is the concept of the "favored quarter," in which bid rents are determined by cardinal direction from the core rather than by distance alone.  In contemporary cities, both the bid rent and favored quarter can be easily found and mapped.
In general terms, the bid rent theory holds that commercial uses will compete more intensively for space in central areas, resulting in higher density (and higher cost) housing forms as residential uses are forced to bid against non-residential uses for scarce land.  By contrast, the favored quarter may represent a wealthy neighborhood using the zoning power or self-rule to insulate itself from non-residential or high-density residential competition, thereby securing what is in effect a subsidy for a valued central location.  This sort of abuse of the zoning power, at city-wide scale, has been the subject of a tremendous debate in recent years.

None of this is new or particularly controversial.  The bid rent theory does not presume anything about residential preferences, so far as I am aware, though we might imagine that the same proximity and centrality that is attractive to commercial uses is also appealing to residents who could enjoy that same immediate proximity and centrality as a major amenity.  At the same time, the hustle and bustle of commercial uses are repellent to those who, for their residential spaces, crave some degree of quiet enjoyment.  Central areas are also likely to be disfavored by those, such as young families, who value large living spaces and high quality public schools above even immediate conveniences where both preferences cannot be met simultaneously.

In a post a while back, I also doubted as to whether these underlying preferences had changed, and that inflated costs in suburban areas and/or foreclosures, had driven higher demand to rent in urban areas.  This is not really contradicted by the National Community Preference survey, which continues to show that people highly value the single-family home and immediate, walkable convenience: 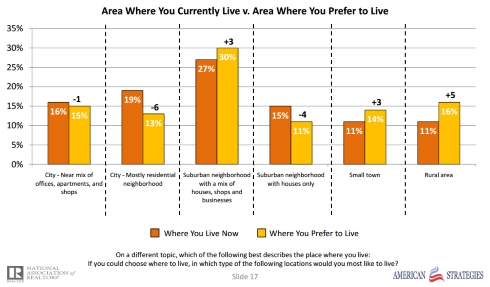 The most undersupplied areas, relative to demand, are the "suburban neighborhood with a mix of houses, shops and businesses," the "small town," and the "rural area."  These patterns seem to be amplified for the millenial generation, with a particular emphasis on walkable neighborhoods.  Oversupplied, relative to preference, are the mostly residential suburb and city (although I suspect many of the "city" residential areas are largely "suburban" in character).  I do not know exactly how "small town" differs in form from the mixed suburban area, but one imagines the category to be inspired by the fictional New England village of Stars Hollow from the Gilmore Girls show, with its vaguely New Urbanist mix of houses and shops with quirky and eccentric independent proprietors immune from the long arm of Walmart:

The allegedly unrealistic image of the town in the show has been critiqued here, but I still think the popularity of the series has something to tell us about the environments and lifestyle people idealize, even if the particular example in the show may not be economically plausible.

Lest we imagine that these choices are in fact economically or spatially incompatible, or that what is being sought is the unobtainable single-family house in Central Park, this is the essence of Japanese market urbanism: an extremely compact assemblage of small single-family homes (and some apartments) that is pedestrian and bike friendly.  This must be the case, since lower densities will result, for the majority, in the perception of a "residential-only" neighborhood.  Naturally, Japanese-style development (as described by Nathan Lewis here) is one thing which the American cities have almost entirely failed to provide, although a few neighborhoods here and there, generally developed before 1930, provide a reasonable facsimile.

Quite a bit has also been written as to whether the millennial generation will, in time, leave urban areas, as though there was some question as to whether this particular age bracket would buck the trend of all groups before it.  As Joel Kotkin wrote two years ago:


"The millennial “flight” from suburbia has not only been vastly overexaggerated, it fails to deal with what may best be seen as differences in preferences correlated with life stages. We can tell this because we can follow the first group of millennials who are now entering their 30s, and it turns out that they are beginning, like preceding generations, to move to the suburbs.
....
These trends can be seen on a nationwide basis. Among the cohort of children under 10 in 2007, the number who lived in core cities as of 2012, when they were 5 to 14 years of age, was down by 550,000. Families are the group most likely to move either to the suburbs or smaller towns. This movement, plus the high degree of childlessness in large urban cores, suggests that many of those who are leaving the core cities in their early 30s are parents with young children."

Now, for families with young children approaching kindergarten age who lack the resources for expensive private tuition, school quality emerges quickly as an important preference, subordinating almost all other concerns.  But this does not mean that these families do not desire an urban lifestyle, or, by their housing choices, are rejecting such a lifestyle.  The survey data seems to broadly refute that idea.  Rather, the cruel spatial economics of exclusion favor low-density, restrictively-zoned places for "good schools," and American cities offer few other intermediate options.  Abandoning an urban life, with its high costs, is a sacrifice for one's children rather than, necessarily, a pursuit of an ideal.  The choice is reinforced by the panoply of incentives the US tax code offers to those who would buy rather than rent.  Many other families with financially limited choice, shut out of suburban options by restrictive zoning and other exclusionary policies, must remain in urban areas regardless of their preferences.

Seen in this context, I do think the New Urbanism has tapped in to something important in the American psyche.  Only, as Nathan Lewis has written about, it has generally (but certainly not always!) done so too literally, using lackluster American examples as inspiration rather than successful ones from abroad.  I do not think the American imagination is so literal, though.  Stars Hollow passed as a New England town even though it bears no resemblance to the typical Connecticut small town with its large central green and sprawling layout.  What was important was not the specific form, but rather the walking lifestyle, the spontaneous interaction and the community as a whole.  The set simply provided the urban form necessary to sustain the belief that this lifestyle was possible for the characters.

If a real-world development does not offer a sufficient density, or sufficient flexibility in terms of mixing of uses, these things will not occur, and you will have little more than a film stage set.  Imitate a Japanese neighborhood, on the other hand, and you may have more success.  Perhaps clad the buildings in Georgian and Colonial facades for the tastes of American buyers, but leave the form alone.  Do not obsess over mixing of uses or "apartments over the shop" -- these things take time and happen gradually, not all at once and from the beginning.  A suburb built to this form, odd as it may seem, will meet the stated preferences of American buyers, families included.  The demand is certainly there.

The New Urbanism, whatever its failings, has at least recognized the situation, changed the conversation and opened new possibilities not only in terms of building, but regulatory reform and making possible traditional forms of urbanism under contemporary city codes.  This blog is intended as a sort of continuation of this new conversation using a slightly different vocabulary.

As to what such a new neighborhood might look like, Nathan Lewis has already written at length, but in another post, I'll reiterate some of his findings along with an example that could be done today.

Posted by Charlie Gardner at 10:33 AM