Homeownership Postscript: An Even Grimmer Appraisal

In a recent post, I pointed out how, when adjusted for age and life expectancy, homeownership in the United States is lower than is has been for many decades.  In the comments, it was further pointed out that not only is homeownership itself lower, but that free and clear ownership has been on the decline as well.

There is some data available here, enough to put together a chart over time first using the non-adjusted homeownership rates (blue is homeownership, red is the percentage of all homes that are owned without a mortgage):

As can be seen, there has been a dramatic change over time, with over a majority of owned homes being owned free and clear in the 1920s and 1940s, and thereafter steadily declining to the present figure of just under 30 percent.  The increase in the 1940s may be related to the effects of wartime rent control and the shift in cash investing to real estate during those years.

Today, the majority of these non-mortgage encumbered homes appear to be owned by senior citizens who have paid off their 30-year mortgages.  In light of this, and the growth of the over-65 demographic since the 1940s, it should be somewhat surprising that this statistic has declined.

Here is the same analysis using my age-adjusted homeownership figures (1920 is omitted):

In addition to the above, of the majority of homes that are encumbered with mortgages of all types, the percent of equity in those homes has been steadily falling as well, as shown on the below chart: 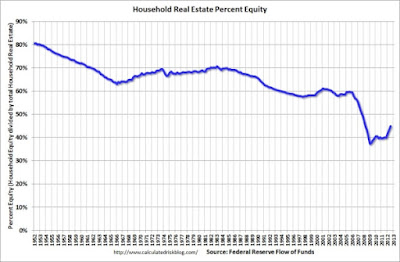 The chart speaks for itself, with a decline in the 1950s and 1960s likely related to a growing use of the 30-year mortgage with its lower down payment requirements, a stabilization through the early 1980s, and a precipitous decline during the cresting and burst of the housing bubble in the late 2000s.

One last point here is that although homeownership fell back to its earlier baseline (in non-adjusted figures) following the real estate bubble, equity has not risen back to to the prior 60-70% range, even in spite of the many institutional cash buyers on the market.  The debt legacy of the bubble appears as though it will be around for many years to come.

Posted by Charlie Gardner at 8:20 AM