The Old(er) Way of City Planning

I've been reading through the 1912 "Plan of the City of Hartford" by the legendary firm Carrère and Hastings, a document which encapsulates some of the best conventional wisdom of that or any era in terms of planning, but which also foreshadows some of the profession's darker moments later in the century.

There are many noteworthy aspects of the report, most prominently the heavy influence of European
laws and physical plans, and in particular plans of the cities of the German and Austrian Empires, an influence which would permanently fade after 1914.  Many of the cities featured in photographs as models for American cities to be followed were, only three decades later, obliterated in bombing campaigns, resulting in a physical destruction to complement the ideological and academic shifts in focus.

Although the laws of foreign countries provide as much to learn from as ever, as highlighted in Sonia Hirt's latest book, the report is significant to me for its focus on what was once called the street plan, a plan of such antiquity that it preceded zoning plans by millennia, going back to the Romans and further, and which was famously employed by American planners in such cities as New York, Savannah and Washington, D.C.  Rediscovering these plans has been a research focus of planner Paul Knight, who has devoted a website to the subject (I highly recommend his presentation on the subject, along with co-contributors available in PDF here).

The street plan, in antiquity and down nearly to the present day, was considered part and parcel of infrastructure along with sewer needs, fresh water and other necessities.  Not only major arteries, such as the old Roman inter-city roads, were considered as an object of central planning, but minor residential streets as well.  The 1912 plan explains the main rationale for this apparent micro-management as follows: 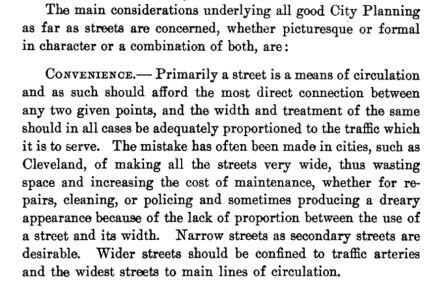 Reasonable enough?  One can read evidence of the practice of street development in the municipal proceedings of the era in a time before the existence of subdivision regulations, here as it turns out from Hartford's own Common Council Board in August, 1912:

In other words, while the developer would propose a street alignment, this was considered by the city planners in the context of the city plan itself, which at the time would have included a street plan.  Thus, for a developer to obtain approval of his proposed street, it would likely be to his benefit to have it agree with the city's pre-existing plan.  Thomaston Street, which exists today, fits seamlessly into Hartford's irregular, but generally continuous and interconnected, street pattern.  The street would also be a public one, but the plan was in conformity with the city's own plan for growth, and with such extensions happening incrementally, the city was unlikely to be overburdened with long-term maintenance obligations by such a development process.  Note also that Mr. Thomas named the street after himself, or so it seems -- apparently naming rights were vested in the developer, as a sort of added incentive.

But what of Carrère and Hastings' own plans?  A picture is worth a thousand words in this context, and fortunately the authors left us with some detailed renderings for street grid expansions.  Here the city "general plan," which as can be seen is a street plan, is presented in its entirety: 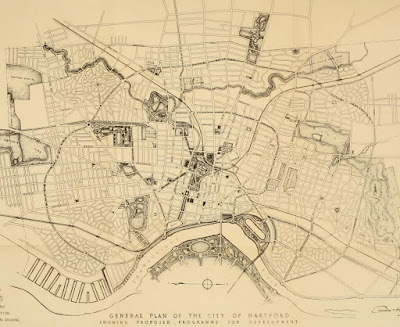 There is no zoning here, and no historic preservation overlay, although the heights of buildings were automatically limited relative to street width.  Notably are the large ring boulevard, cast as the Ringstrasse or Unter Den Linden of Hartford, but which equally appears to anticipate a grade-separated highway encircling the city.  Overall, the map delineates the public realm of the city: the streets, parks and certain public buildings, those things which were considered appropriate objects for planning.

Note also the newer planned areas to the corners of the map.  In contrast to the irregular grid of existing Hartford, these areas are drawn in a style which is clearly influenced by German neo-medievalist planning fashions of the day, but which again are also anticipating the curvilinear, limited access suburban developments of the late 20th century.  Nonetheless, the areas are drawn in in complete detail, with all, or at least most, subsidiary streets represented.

The planners note that Hartford was undergoing a period of small multifamily development, but are disappointed at the limited options for ownership under current laws.  One wonders whether they had pondered a condominium style of ownership, which at the time was still many years in the future.  In the absence of such laws, the only realistic option was for the freestanding house (common in Hartford) or the rowhouse (very uncommon in the city).

What is sobering to realize from the vantage point of a century later is how utterly the City Beautiful movement, as represented by this crowning document, failed in its efforts to ape the grandeur of the European city, and how thoroughly it succeeded in anticipating the primacy of the car and the rash of road-widenings and "stroad" construction that would follow in its wake.  After 1914, in fact, much of even the desire for inhuman-scale grandeur would fade, to be replaced by cold engineering and mechanical precision.  Dresden was never again to appear as a serious model for Hartford or, most likely, any other American city, and certainly not after 1945.*  And the street plan?  It was eliminated, either folded into "comprehensive plans" or dissolved into subdivision regulations that, using 1930s FHA standards, encouraged the excessively wide streets that the Hartford planners warned of.  In most cities, only the zoning plan survives, with no separate street plan at all.  Streets, many of them private, take selfish, non-connected forms, with the result that greater and greater volumes of traffic are channeled onto fewer and fewer roads which must therefore take on ever-increasing dimensions to handle the load.

In a few fast-growing American and Canadian cities, such as Toronto and Dallas, something of a street-plan led growth pattern is visible, and in most Mexican cities such a process continues today.  But in other cities, there still may be something to take away from these old plans despite their failures.

*Dresden's historic center is currently undergoing a major rebuilding project, indicating that Dresden may be built again, from scratch, before the original City Beautiful plans are fully realized in Hartford.
Posted by Charlie Gardner at 2:36 PM