Narrow Streets and NYC: The Problem, or the Solution?

After an earlier post on the spaces in between blocks, I'd like to circle back to consider one of the enduring oddities of New York's particular history with streets, apartments, and the spaces behind them: that being, that the harder the city tried to banish narrow streets, or, more specifically, narrow spaces between buildings, the more they seemd to proliferate.

I've mentioned before that a primary reason that the New York state legislature mandated streets of no less than 50 feet for the city's 1811 plan, and barred the opening of new streets without its consent, was, according to surveyor John Randel Jr., to "[avoid] the frequent error of laying out short, narrow, and crooked streets, with alleys and courts, endangering extensive conflagrations, confined air, unclean streets, &c." 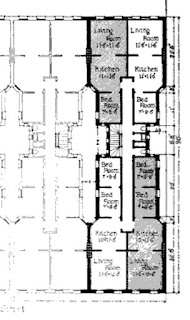 Randel's remarks indicate that he was not only concerned with streets, but with courtyards and other non-street spaces that happened to be narrow or enclosed.  Through a long series of unintended and unforeseen consequences, which I won't repeat here, the result of this focus on avoiding narrow "alleys and courts" was the familiar New York tenement, seen at right in its mid-block "dumbbell" form (source here), in which only one in seven of the rooms opened onto the wide fronting street.  The remainder opened onto a tiny airshaft or looked out over a 10-20' gap between tenements.  Put another way, 11% of the building perimeter faced the street, another 11% faced the rear court, while 78% faced interior light shafts.

The conspicuous failure of the city's dwellings to match the aspirations of the 1879 Tenement House Act eventually resulted in an abandonment of the dumbbell form and the adoption of much larger and more elaborate apartment plans following the Tenement House Act of 1901.  A typical block of "new law" apartments in the Bronx is shown below, governed by a complex set of rules which required courtyards and prescribed minimum widths for these courtyard spaces that ranged from six to 24 feet, with the intent to provide each room with a window opening onto a reasonably large outdoor space:

Again, the city appears to have avoided the opening of any dreaded narrow streets, but if we consider this arrangement of structures closely, it is possible to see how the majority of rooms (around 70%) open onto spaces ranging from 10' to 24' wide – very much within the range Nathan Lewis has defined for his "really narrow streets."  (Confirm on Google Earth if you'd like.)  The network of courts and air shafts even resembles a street network, but no attempt has been made to use it or adapt it for that purpose.

With the new law tenements, New York had come full circle after nearly a century.  The desire to eliminate courts and narrow streets, without an understanding for the reason they had come into being again and again in the traditional cities of the world, had led, unintentionally, to pre-law tenements, old law tenements and at last to the new, where narrow streets, courts and alleys – the very things which the initial 1811 plan had sought to abolish – were effectively re-introduced as the central design feature.

By employing this semi-traditional format of mid-rise apartments on very narrow courts and alleys, and without dedicated parking, but with hypertrophic, automobile-scaled streets, areas built according to "new law" regulations achieved extraordinary densities.  Inwood and Washington Heights, built almost entirely along these lines, have an average density of 130,000 per square mile with very few buildings over six stories.  To put this in perspective, only two other American cities (as of 1990) in the have even one census tract greater than the average density of these neighborhoods.

The failure to let the alleys serve as public rights-of-way, however, saps the vitality of these places by inflating block dimensions and impairing connectivity, while the omnipresent wide automobile thoroughfares detract from the pedestrian experience, as they do elsewhere in the city.  The presence of a few parks is offset by the complete absence of public squares.  A traditional city format, by contrast, addresses these shortcomings while permitting the same intensity of development.

The heyday of the new law tenement was brief, lasting only though the 1920s, after which the ascendant tower-in-the-park design philosophy dispensed with urbanism altogether in a single-minded pursuit of open space, light and air.  Still, the fact that, despite a century's worth of effort against them, courtyards and narrow ways returned as the solution to New York's early 20th century housing problems serves as one illustration of the enduring functional virtues of narrow streets.