Having lived for three years in Nashville and developed a fondness for the place, I was glad to see the city get some coverage in a recent  post by Kaid Benfield on the city's plans for developing a regional transportation network.  In addition to its plans for the region, Nashville has revamped its zoning code, adopting in 2010 what is in substance, if not in name, a form-based code for its downtown.  The changes are some of the most promising I've seen in any code revision for a major American city, including the repeal of most of use-based zoning limitations and the elimination of all parking minimums within the downtown area.  It's a long overdue change for a downtown with a particularly tragic 20th century planning history.

An 1860s view, at right, shows a city built densely along the Cumberland River, with the city hall and courthouse placed in the center of a large square (the Public Square).  The state capitol building sits on the point of highest elevation, just north of the main commercial area.  The grid was less rigorous here than in some cities, with a variation in street widths and an allowance for adaptation which permitted the emergence of alleys and narrow streets along and across blocks, resulting in a  fine-grained urban fabric.  Even as early as this era, however, a trend toward a city of detached single-family homes is clearly evident.  The path of the railway line, meanwhile, anticipates the subsequent blighted industrial belt and inner ring of Interstate 40.

Nashville was one of the first cities to pounce on urban renewal funds following the Housing Act of 1949, acting swiftly to draw up plans for clearing large swathes of the city (clearance work around the capital had been ongoing since the 1930s).  The Public Square, seen as decrepit and impeding downtown business retention, was obliterated: the courthouse and town hall were torn down, and the buildings surrounding it razed.  Along its margins, a new bridge carried six lanes of traffic into a widened Union Street.  An intricate network of alleys was neglected or abandoned, leaving Printer's Alley, a one-block stretch of shared space traditional urbanism, as a reminder of the past. Poor residential neighborhoods surrounding the downtown were cleared en masse and rezoned for industry in an attempt to retain the city's manufacturing base.

In the desolate landscape resulting from this policy lies opportunity for Nashville and for other cities in similar situations, since the same land which was cleared has remained largely fallow in the intervening decades, leaving it a blank slate largely unencumbered by NIMBY opposition.  The image below shows the area, Sulphur Dell, immediately to the west of the downtown (west is up) where lately a few apartments and townhouses have begin to sprout amid vast areas of surface parking: 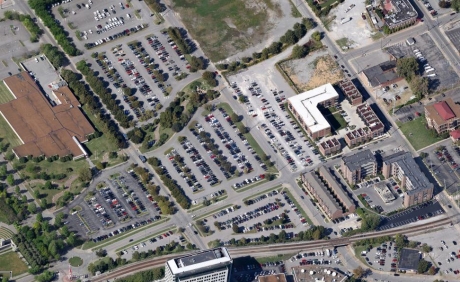 The piecemeal development occurring prior to 2010 has not necessarily come together to create a compelling urban environment, as setbacks and parking requirements have combined to result in fragmented development with little sense of spatial enclosure.

The new code explicitly acknowledges these shortcomings, noting that "while residential development has thrived in recent years, the creation and enhancement of urban neighborhoods is still a goal."  In line with this, some of the most significant changes in the code include:
The first three of these are remarkable achievements in contemporary planning and zoning, representing a reversal of almost 100 years of planning policy and a liberation of basic property rights long held hostage by the city.  The height limits – anathema to some, I know – may help cut down on the high-rise land speculation that is rampant and impairs development throughout the downtown (paired with a land value tax, the benefits would be greater still).  Even so, there are elements here that either undermine the stated objectives of the code or could be strengthened:
Despite these drawbacks, Nashville's new code for downtown is a remarkable achievement, and ought to serve as a model for cities like it, or for any cities, for that matter.  Expanding it beyond the downtown area would be a major next step, but the selective loosening of regulatory constraints in that one location may encourage a beneficial funneling of real estate investment into long neglected central areas.

Related links:
The Nashville Civic Design Center, which is staffed by some dedicated urbanists, has spent years working on plans for downtown neighborhoods, and has a wealth of articles, photos and plans on its website for those interested.
Posted by Charlie Gardner at 3:18 PM