The newly released draft of Washington DC's zoning code, as reported by Greater Greater Washington, contains promising changes, including reduced parking requirements and the allowance, after a decades-long ban, of homes on alleys.  Also new to the code is the proposed "Green Area Ratio," a regulation that is molded on similar laws found in European cities such as Berlin and Malmo.  A version of the same idea, the so-called "Green Factor," has already been implemented in Seattle, where it has drawn praise and some criticism.

The basic idea of the GAR is this: in order to address a perceived imbalance of paved/built to green space in urban areas, the zoning code must mandate dedicating a certain proportion of each lot to landscaping or permeable surfaces.

According to its proponents, the GAR will push buildings to better treat stormwater, improve air quality and reduce urban "heat islands." However, the draft regulations do not appear to contain any standards to determine whether landscaping elements actually aid in stormwater retention or treatment. Nor is there information about whether the estimated benefits are large enough to matter regionally or city-wide.

Existing research also raises potential concerns that nobody will monitor the environmental performance of these features once built. George Washington University professor Melissa Keeley, whose work the draft documents cite, sounds a cautionary note about "policy deficits and the lack of adequate outcome monitoring" in her 2011 study of Berlin's green ratio.

Some of the benefits seem questionable, like the statistic that "1,000 square feet of green roof can supply 110 people with oxygen." While this is beneficial, that the carbon monoxide-emitting motor vehicle creates much more pollution in urban areas than the lack of landscaped surface.

Berlin's air quality, which some sources estimate is the cleanest in Europe, largely owes its success to car restriction zones and policies that encourage traveling by foot, bicycle and mass transit. Cities are unlikely to substantially improve air quality without confronting the role of the car.

The most notable element of the GAR is, perhaps, what it does not include. Single-family homes receive a special exemption from the proposed regulations because, the hearing report states:

Imposing expensive mandates on multifamily housing while exempting single-family homes from regulation creates a perverse outcome in which dense, space-efficient housing suffers penalties for being environmentally unfriendly, while low-density homes occupying a small portion of their lot enjoy rewards for "retaining more green area." While the GAR is compatible with high density urbanism, regulations which apply differently to various densities can make some types of housing more expensive, especially small apartment buildings.

The proponents of the New Urbanism, meanwhile, have been working to address stormwater management from an unapologetically pro-urban perspective, recently engaging the EPA in a discussion over existing stormwater standards that may inadvertently penalize density and enourage sprawling development.   Laurence Aurbach's article Dense and Beautiful Stormwater Management discusses these issues in depth, suggesting that planners and regulators accept density as a best management practice for stormwater.

Ultimately, certain landscape elements, green roofs and other innovations may have an important role to play in Washington, but residents deserve to learn more about the long-term costs and benefits of such a large scale, mandatory and relatively untested regulation before adopting it as part of the zoning overhaul.


In old cities, the highest art is often maximizing visible greenery while minimizing GAR. That creates streetscapes of intense greenery at low cost. The tools of this approach are not swales and rain gardens, as useful as these may be, but window boxes, hanging pots, climbing vines and clay urns: 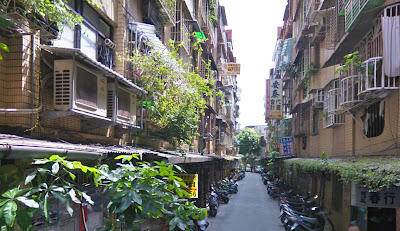