The new exhibit "The Greatest Grid" at the Museum of the City of New York is well worth a visit for anyone with even a passing interest in urban planning or the history of the city.  An accompanying exhibit of speculative urban designs, however, provides evidence that the heroic materialist ideal has been slow to loosen its grasp over the minds of some practitioners in the fields of architecture and urban planning.

Before featuring a few of these, though, a few words on the main exhibit.  Despite curator Hillary Ballon's evident admiration of New York's grid plan, the exhibit is evenhanded in its presentation, quoting liberally from critics such as Clement Clarke Moore (who famously quipped that the commissioners were "men who would have cut down the seven hills of Rome.")*  Not only the early 19th century era, but the entire subsequent century of growth and change is covered.  The featured historic maps and photos of the city are beautiful and fascinating.

There are also copies of the plans of other cities of the era, including L'Enfant's plan for Washington D.C. and (later commissioner) Simeon DeWitt's 1794 plan for a northern extension of Albany, which shows the same grid of oversized blocks and uniformly wide streets that would reappear a thousand times in the settlements of the following century.  The web of narrow streets and small blocks by the waterfront, a legacy of Dutch administration, was, as in New York, not eradicated, but evidently was not seen as an object of any interest, except as an example of a characteristics to be avoided.

Of particular interest to me were the photos of the shantytown settlements that occupied large parts of Manhattan through the end of the 19th century.  One interesting fact from the exhibit: Jacob Riis, the famous social reformer, opposed the eviction of shantytown inhabitants and the demolition of their dwellings, arguing that the self-built homes of the squatters provided accommodations superior to, and more affordable than, the tenements of the Lower East Side.

The partner exhibit, "The Unfinished Grid: Design Speculations for Manhattan", is interesting for somewhat different reasons: not so much for introducing viable design proposals for the city, but for shedding light on the imaginations of contemporarary architects and planners.  The proposals on display seem to draw from three basic sources of inspiration:
On to the exhibits:

Heroic Materialism: At left, giant skyscrapers dwarf the Empire State Building in a plan that called for zoning limits to be rescinded for all lots facing on north-south avenues (and presumed that developers would respond with towers obviously inspired by the Emerald City). At right is an architect's idea of some vast megastructure looming over the northern end of Central Park, with father and young son enjoying the park underneath projecting towers. 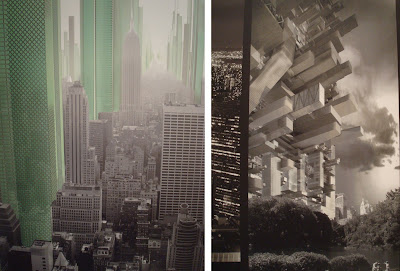 What about building 40-story towers on landfill sunk into the 50-foot deep waters of the Hudson river?  Cruise ships thread channels between buildings. 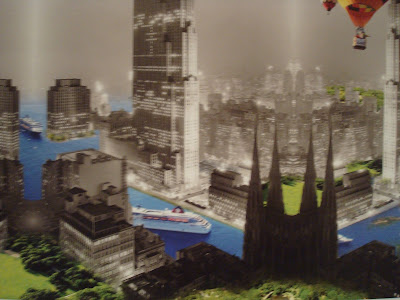 From a Green Urbanism perspective, why not tear up 71st street and replant it with wheat?  At least the streets would be car-free under this proposal, and the view is human-scaled and at street level.  More fundamentally, this proposal does recognize that the vast amount of Manhattan given over to wide surface streets represents a greatly under-exploited urban resource.﻿ 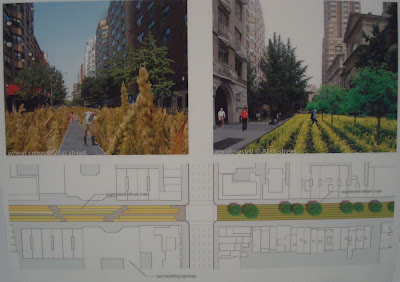 Tesselated housing in the sky -- they can't be serious, right? 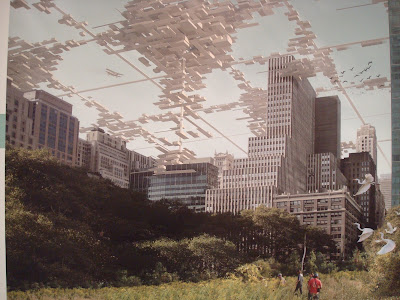 Finally, 6 1/4 Avenue, by Ksestudio, which proposes opening a new 40-foot wide street between and parallel to 6th and 7th Avenues that, according to the designers, "activates the depth of the base of the New York tower by multiplying the public perimeter of the block."  Simple and elegant, simultaneously addressing the excessive width of the midtown blocks and the lack of additional north-south routes while greatly adding to the amount of accessible street frontage.  Feasible?  Maybe, maybe not, but the method is thoughtfully incremental.  No flashy graphics were included, just clear and concise figure-ground drawings. 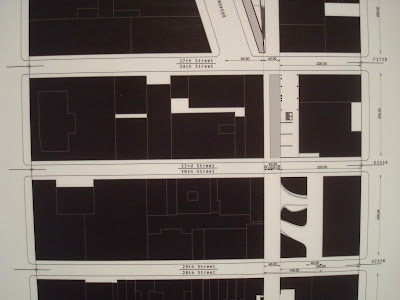 *Stephen Smith has recently covered some other critiques of the plan here.

Posted by Charlie Gardner at 11:04 PM