Stephen Smith and Cap'n Transit have been discussing the recent news that Cornell University-Technion-Israel Institute of Technology's graduate school of applied sciences will be constructed on New York City's Roosevelt Island, a 147-acre sliver of land set squarely in the middle of the East River.
Although Stephen's article questions the wisdom of subsidizing physical expansion of the technology sector in poor and middle-class neighborhoods, both he and the Cap'n also critique the proposed design of the new campus (below), which Stephen has called "quasi-Corbusian:"
Citing Nathan Lewis, Cap'n instead suggests a traditionally urban form incorporating "really narrow streets" for the new campus.  As it turns out, there are abundant examples of traditional urbanism on small or narrow islands that might serve as models, as pre-industrial cities often formed on or around mid-river islands for reasons of security or ease of transportation.
Here for instance is Paris' Île Saint-Louis, a 27-acre island only slightly narrower than Roosevelt Island.  Although no high rises are present, population density here is approximately 60,000 per square mile, with room to spare for modest but well-defined park space and a river promenade no more than one minute's walk away for any resident.

This is Chioggia, a canal town on the southern end of the Venetian lagoon which, although charming in its own right, is completely overshadowed by its famous northern neighbor.  I visited this town several years ago, and in spite of the extremely high ground coverage of buildings, there was no sense of claustrophobia.  The need for park space is reduced when the waterfront is so readily accessible.

Rhoda Island, adjoining central Cairo, has an evident early or mid-20th century plan in the garden city manner, with relatively wide streets on a modified grid.  Still, as virtually all buildings are mid-rise apartments, population density is very high. The Nile is no more than 500 feet away from any building.

For contrast, scroll back up to the proposed campus and compare the arrangements of space, the density of the built form, and the networks for pedestrian circulation.  Although the site claims that the primary building will be "the largest net-zero energy building in the eastern United States," there is nothing particularly green in underusing high-value urban land adjacent to mass transit. 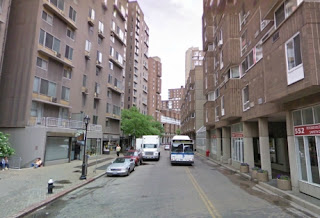 The Cornell plan, rather than being a departure from current planning practice on the island, actually continues an ongoing trend away from more traditional forms.  The history of post-1950 urban development on Roosevelt Island is a interesting story in itself (for more see here and here), but at least at the outset, in the late 1960s and 1970s, planners conceived of a car-free haven densely built up with apartments. In spite of rather dismal architecture, the result (at right) was strikingly urban, and moreover achieved a sense of place through 1) keeping the street fairly narrow; 2) curving the street, creating visual enclosure; 3) slightly varying the angle at which buildings face the street to create gentle variations in right-of-way width; and 4) incorporating traditional city elements such as the covered arcade, at right.  The result, in spite of the architecture, is quite good, and it is probably no coincidence that the wikipedia page for the island features this very same perspective. 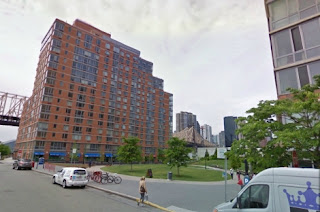 More recent developments have abandoned this approach, however.  Monolithic new apartment buildings to the south are placed in the middle of broad expanses of grass lawn in an approach far more reminiscent of 1960s tower-in-the-park urbanism than is the case for the older buildings to the north.  Rather than defining the street, these apartments are objects floating loosely in space, unrelated to each other or to the topography of the island.  An aerial view shows the extremely low footprint of these buildings – an extravagant use of land even by the standards of 1960s public housing – and their lack of engagement with the waterfront across the street.  Further, does this plan leave any room for future infill or expansion?  Most unbuilt land appears spoken for as roadway or dedicated park space.
If, on the other hand, builders and planners wish to provide a traditional urban environment, there are a multitude of successful examples waiting to serve as inspiration.  If not on a narrow island, with mass transit access, adjacent to Manhattan, then where?
Posted by Charlie Gardner at 12:33 PM