Despite the enormous amount of attention that has been given to the subject of affordable housing in the recent past, and the wide array of programs and initiatives in response, including low income housing tax credits, inclusionary zoning and voucher programs, to name a few, there's been relatively little formal study made of filtering, the process in which housing gradually declines in relative price, and in rental value, as it ages. To fill this gap, economist Stuart Rosenthal has released a new paper in which he concludes that filtering, more so than many place-based subsidized housing programs, can provide a viable long-term source of low cost housing.

Using data from the American Housing Survey, and examining the income of owners and renters at various points in time, Rosenthal constructed charts showing the change in inflation-adjusted incomes of residents for homes of ages ranging from one to 86 years: 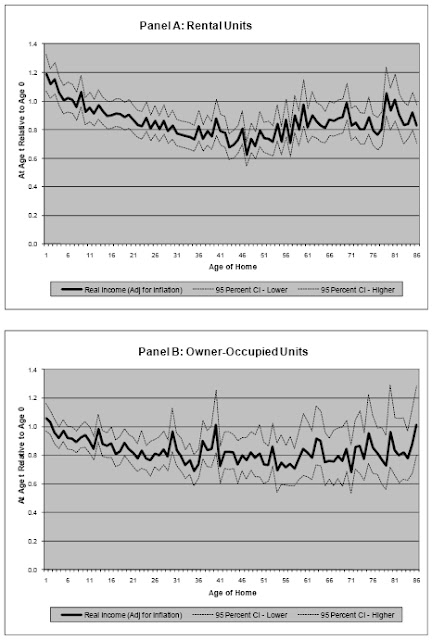 Based on the observed rates of downward filtering, which range from .5 percent per year for owner-occupied housing to 2.5 percent per year for rental housing, Rosenthal concluded that "policy makers should take seriously the market’s ability to generate lower income housing, and especially in the rental sector of the
market."  The study noted that differential rates of filtering by city and state also have implications for the efficient apportionment of federal housing money.

An interesting finding was that homes over 50 years old showed an increase in owner or renter income, even though the survivorship effect was controlled for by following individual houses over time.  Rosenthal hypothesized that older homes may have intrinsic structural qualities that make them more desirable to  buyers.

That hypothesis tracks my own finding which I discussed here, suggesting that the process of filtering, at least for initially high-income older neighborhoods, was a temporary result of rapid suburban dispersal in the 1940-1970 time period, and since that time has been steadily reversed.  On the other hand, some persistently disfavored quarters have remained poor throughout the 1940-2000 time period, showing little evidence of further decline or imminent gentrification.

Is filtering, then, partially an artifact of a temporary and unsustainable process of suburbanization, with gentrification representing a reversion to a pattern determined more by centrality of location and quality of housing stock or urban environment rather than size or newness of the home?  What that trend holds for the future of market-driven affordable housing is not entirely clear, although dire prognostications of coming suburban slums have appeared repeatedly in recent years.

One could hope that increased demand for existing urban neighborhoods might at least translate into a  process of steady upgrading and intensification of urban areas, yet the opposite seems to have occurred in most places, with residents holding fast to exclusionary zoning measures designed to impede new construction or conversion to higher value uses, even to the extent of zoning out larger single family homes.  The ultimate antidote to urbanism and densification, zoning, remains strong even nearing its 100th birthday.
Posted by Charlie Gardner at 4:50 PM