In the comments to recent posts, Chris Bradford and Cambias have cited Houston as a counter-example of a city without zoning which has developed a highly centralized, high rise-dominated downtown in spite of the fact that no zoning boundaries nor any physical obstacles constrain the horizontal growth of the central business district.  So why then has a small forest of skyscrapers grown so closely together?

A few quick thoughts and observations: 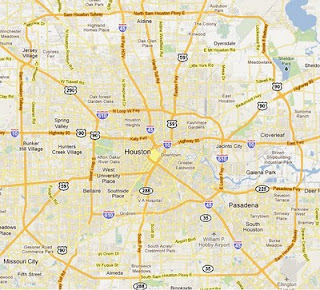 "As has been widely discussed, redevelopment around transit stations has been less widespread in Houston than in other cities, and much of this is because of the work of speculators. While this issue is not unique to Houston, it is compounded by the lack of development regulations. Essentially, every speculator is pricing their land for the construction of a skyscraper, when the market may only be suited for low-rise. Redevelopment activity is significantly impaired when there is this disconnect between the realistic development potential of a property and the astronomical price expectations of speculators."

If every downtown Houston landowner prices his land for a 60-story office tower, development, one might think, would likewise be impaired.  Even if very high demand exists for office space, few developers have the resources in time or money to purchase the land and construct such a tower.  And history shows that building one can be a risky venture, as economic conditions may have changed greatly during the years from planning to completion.  In any event, whether or not this explanation has any validity, in spite of a roaring economy in the 1970s through the early 1980s, and again in the 1990s to today, much of Houston's downtown remains covered by surface parking lots.  Mid rise development, however, has flourished in the area just outside the loop (see last page).

In fact, building coverage today is far less than it was in 1912 when the below drawing was made (adapted from the excellent Big Map Blog), showing a mid-rise city punctuated by occasional tall buildings, a format which persisted for the most part into the 1950s: 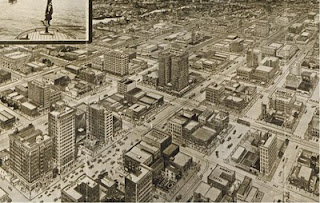 So how much can Houston tell us about development patterns in the absence of zoning?  Even if it disproves the idea that a zoning-free city will tend to develop in a more horizontal pattern (not that I necessarily agree that it does), might Houston have  benefited overall from a modest height limit?  What other factors might have contributed to this pattern?
***Note: Regarding Houston's zoning, please see Christof's comment below on Houston's downtown exemption from municipal parking requirements.  Here is a link to a map of Houston's downtown tunnel system.
Posted by Charlie Gardner at 7:26 PM