At the new website The Atlantic Cities, Ryan Avent has published an adapted portion of his new book in which he makes a common sense, but infrequently raised, observation about the economic effects of zoning laws:

"People tend to have a proprietary feeling about their neighborhoods, particularly when they have large sums of money on the line thanks to their investment in their home. This feeling leaves urban property rights in a gray area. Residents are remarkably willing to dictate to private property owners what can and can't be done with their land. They're willing to approve restrictive zoning rules and lobby against permitting in ways that dramatically reduce potential land value, without ever dreaming of compensating owners and would-be developers." 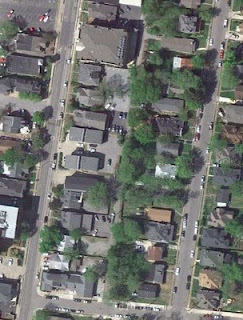 If zoning reduces land values, however, how is it that zoning has been convincingly shown, by Ed Glaeser among others, that zoning contributes to inflated housing costs?  The answer, what I'm referring to as the zoning paradox, is simply stated: zoning increases the per unit cost of housing, while decreasing underlying land values.*  I've alluded to this before in an earlier post, but let me illustrate with a real life example to demonstrate this seemingly counterintuitive point.  You may be able to find an example in your own town or city that will work out in similar fashion.
Here's an image from near my old neighborhood in Nashville, the Music Row area, where what had long been a single-family residential area was rezoned decades ago for a mix of office, residential and commercial space in the area to the west of  the alley running between the two streets shown (this was in reaction to the arrival of the city's famous music recording industry into the area).  Given its mix of uses, the rezoned area does not enjoy the typical "protections" of Euclidean zoning, while the single family area is strictly limited to single-family and duplex residential.  Since protection from the externalities generated by incompatible uses is commonly mentioned as an economic benefit of zoning, this factor should, in theory, weight the scales on the side of the single-family area.
If we look at the appraised value of one of the houses on the rezoned side -- a house of similar characteristics to those in the single family area, having been built for that purpose in the 1920s -- we find a per acre land value of $1,786,000.  On the opposite side of the block, where duplex residential zoning applies, land values are only $294,000 per acre!  In fact we can go further and note that the combined value of the single family home and the land on the residential side is only half the value of the land alone on the rezoned side of the block.  The net effect, therefore, is to lower overall property values.  The property tax benefits to the city of more permissive zoning seem clear.
It's worth noting that these values are derived from an allowance of as much as 80 units per acre on the mixed-use side (a genuinely urban density), while the duplex zoning on the residential side permits slightly less than 12 units per acre.  Yet with this greater intensity of development, per unit costs fall considerably for new construction (although the price per square foot may actually rise**).  By contrast, on the residential side, even though land values are low by comparison, a developer purchasing an existing home must build a very large and expensive house to justify a tear-down.  Since the market for very large homes is saturated by the imposition of minimum lot sizes and other low-density regulations throughout the city, however, this means that little redevelopment will occur, even though this neighborhood is only a mile and a half from the downtown.  Existing houses stagger on, while development is displaced elsewhere.
Overall, the effect of these density and use-limiting restrictions seems to be to concentrate financial benefits in the hands of incumbent homeowners (by inflating the values of homes), while impoverishing the city as a whole (by substantially devaluing the property tax base while increasing the cost of both rentals and new home purchases).
One last point: simply because permissive zoning increases land values, does it necessarily follow that eliminating some or all density-related restrictions -- minimum lot sizes, height limits, etc. -- will provide a net economic benefit to the city?   I'd suggest Michael Lewyn's work as a good starting point on that issue, but in a follow-up post I'll venture a couple more thoughts on the topic.
Related posts: Did Zoning Ever Conserve Property Values?

*See On the effects of minimum-lot-size zoning, S. Bucovetsky.  This paper deals with minimum lot sizes only, but logically the same analysis should apply to other restrictions, such as FAR ratios and other density and use limitations.
**The higher per square foot prices paid in certain instances that I was able to identify suggest that buyers, at least in this market, are willing to give up large amounts of square footage in exchange for a reasonable price -- to the extent of taking a apartment 60% smaller than a new duplex home for a price only 30% less.  This could indicate an undersupply of mid- and small-sized apartments in this area (almost certainly true) or that the marginal value of each additional square foot above, say, 1200 sq. ft. is quite low for the type of buyers who are looking in the area.
Posted by Charlie Gardner at 3:23 PM