Note on Gentrification and Preservation

There have been several great pieces on the dynamics of gentrification over the past several days. Market Urbanism's Stephen Smith, who is now writing at Forbes, observes how permitting more development in desirable areas will help "soften the blow of gentrification." Alon Levy theorizes about the causes of central city revitalization. Emily Washington, in response, considers the time preferences of the upper and middle-classes. At the City Paper, Lydia DePillis discusses the relationship between historic preservation and gentrification, among other things.

In DePillis' article, in particular, there is this observation linking preservation and neighborhood revitalization:

"The thing is, preserving distinguished architecture and well-constructed neighborhoods can be one of the best ways for real estate to hold its value. Places that look like they were once prosperous send a message that they could be again."

However, one can argue that it is well-constructed buildings and distinguished architecture which attracts gentrifiers long before historic districts are contemplated.  The following chart was put together some years ago for a project looking at four southern cities (Nashville, Atlanta, Memphis and Savannah) in which all census tracts in 1940 were grouped into quartiles based on housing value in that year.  The tracts were then revisited in the 1970 and 2000 census years, keeping the groupings the same (the numbers show quartile housing value divided by the median housing value for the city in a given census year): 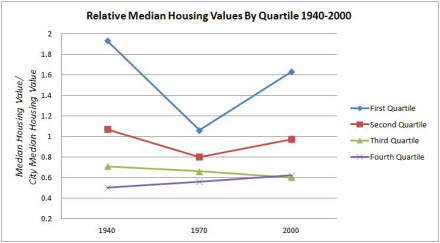 The pattern over time distinctly shows the operation of residential "filtering" from 1940 to 1970, as homes in wealthier neighborhoods came to be occuped by those from poorer neighborhoods, and an almost mirror-image reversal of this trend from 1970 to 2000 (intervening census years show that the turning point is in fact around 1970).  The middle class was simply returning to the same homes that their parents' generation had abandoned some twenty to thirty years before.  In 1970, moreover, one could purchase a home built by, say, an upper middle-class family of the 1920s, for what was essentially a 50 percent discount – a house that went for four times the price of those in the poorest quartile in 1940 was, in 1970, selling for only twice that, even though these were in most cases the very same houses.
This is different result than some other studies (see e.g. Old Homes, Externalities, and Poor Neighborhoods: A Model of Urban Decline and Renewal) which find that neighborhoods should cycle over time as housing stock ages, deteriorates and ultimately becomes ripe for redevelopment.  Yet the poorest two quartiles have not cycled at all in 60 years, while the housing in the first quartile was not actually redeveloped, but only renovated by new buyers (that is, its age was an amenity, perhaps the primary amenity, rather than a liability).  The hidden factor is the quality of the housing stock, which overwhelms the effects of aging and deterioration.
This can help explain the perceived attitudes of preservationists toward neighborhood change that DePillis discusses in her article.  It also suggests an explanation for the suburbanization of those with low incomes: as the better urban housing is gentrified, the former occupants may have two choices: move back into impoverished central city neighborhoods or move out into the aging suburban housing vacated by the gentrifiers or those moving to newer suburban houses. If costs are roughly comparable, the decision is easy.
This type of gentrification is different from the the arrival of residents back into a formely commercial or industrial urban core, where the pattern is much more analagous to greenfield development (as Alon mentions in his post).  This is occurring simultaneously with gentrification of existing neighborhoods in Nashville and other cities, but takes a very different form.
Related Posts: A Preservationist's Dilemma
Posted by Charlie Gardner at 12:08 PM