After reading Bruce Richards' comment on the previous Seaside post,  I returned to the town on my last day in Florida and took a closer look at some of the "Krier lanes," the narrow footpaths running behind and between the houses of Seaside which apparently double as utility easements.  Only by walking these paths can one appreciate some of the more subtle design decisions made by the town planners. 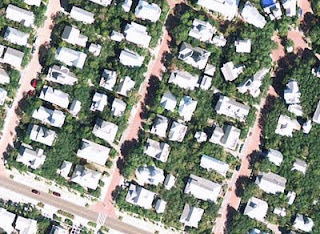 What I found interesting to note is not only the frequency of accessory houses, but the presence of four lots (in the center of the image at right, although there are several others in the town) of typical Seaside dimensions of 50'x100' which have each been subdivided into two 50'x50' lots, a size very close to that which Nathan Lewis has suggested for a dense neighborhood of single-family detached homes.

The only access to these lots, as with the accessory houses, is by the lanes.  Despite the small size of the lots, the houses are quite ample: 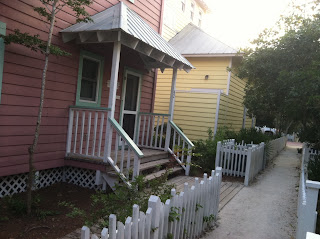 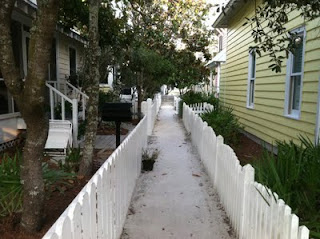 The house to the left in the top photo is, I believe, this one, a 1,400 square foot house with 550 square feet of porch space.  The address is given as Savannah Street, one of the wide, brick-paved streets, yet the only direct access is by the paths.

A city of residential lots of this average size, using a distance between houses the same as that in the lower photo (about 16') for rights-of-way, and with short and narrow blocks of 300'x100', would attain a density of over 9,100 units/square mile, or, using the American average of 2.59 persons per household, around 24,000 people per square mile.  A few wider streets would be needed at intervals, but they should not alter this outcome greatly.  A real life example is Nathan Lewis' own Tokyo suburb of Seijo, which he's used to familiarize us with the neglected area of Japanese urbanism: 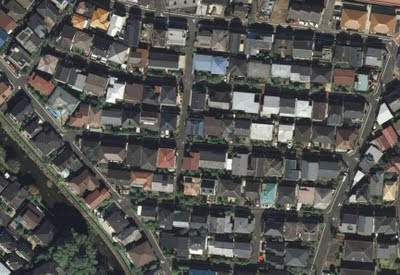 The Seijo street view, with a remarkably Seaside-like house on the left: 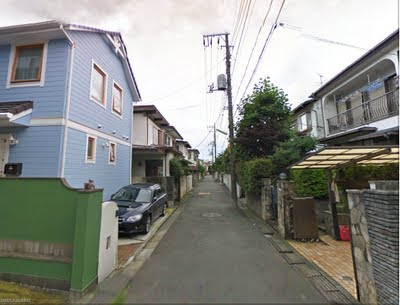 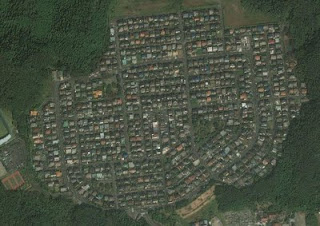 Or, at right, consider an entire neighborhood built along these lines.  This is a development at the fringes of Tokyo -- just a bit further west steep mountains quickly rise up.  It also happens to be about 70 acres, very close to Seaside's 80.  Even the street network is vaguely similar, yet density is about 25% higher.  It's not necessarily a model to be copied, but it does show what could be accomplished using the basic 50'x50' lot that Seaside pioneered along with 16' streets.  To densify further, while retaining a single-family detached form, subtract half or so of the 50'x50' lots and replace them with the "accessory dwellings" that are abundant at Seaside, and which, under separate ownership, can fit on their own 20'x25' lots: 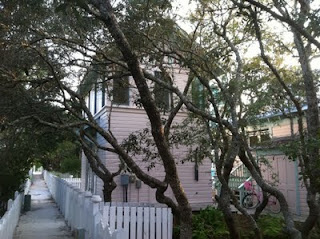 These cottages offer around 500-800 square feet, not much different from the "micro homes" currently being built in Portland that commenter Vince has mentioned.

The promise offered by these common sense innovations at Seaside unfortunately has not carried over into most New Urbanist developments.  At Kentlands, for instance, although many individual houses can fit within a 50'x50' lot, a rear yard of equal size has typically been reserved for a detached garage, an issue I've talked about before.  But the lessons of Seaside are there for anyone willing to look a little closer at the remarkable planning that went into it.

For more on these issues, I strongly recommend reading Nathan Lewis' site if you haven't discovered it already:

Posted by Charlie Gardner at 6:00 AM