NIMBYism Under the Microscope

Chris Bradford has a post at his new blog, also picked up at Citylab, urging a better understanding of the so-called NIMBY phenomenon. Chris' thesis, as he sets it out, is that "NIMBYism is about monopolizing access to neighborhood amenities."  This is somewhat different from other perspectives which view NIMBYism (a term I use due to lack of substitutes) as an attempt to protect property values, to exclude undesirables or to guarantee privacy.  As Chris writes:

The post is very timely for me, as the city I live in is currently considering a proposal to upzone a single-family residential area around a commuter rail station that is surrounded by neighborhood commercial uses.  I won't get into the specifics of the location or the local politics, as the story could be repeated a thousand times across American towns and cities, but suffice it to say that the comments from neighborhood residents on a petition opposing this proposal are enlightening and, I think, strongly supportive of Chris' thesis.  I've excerpted a few of them below:

"I've lived here for 31 years and you are and in some ways already have destroyed the essence of our quaint village of [Anytown]."

"I'm signing because our lovely [Anytown] is being destroyed, one building at a time. Please stop this madness. The only people benefitting from all this construction are the builders and developers."

"Stop the intrusion to our community of apartment buildings and additional retail businesses. Our neighborhood is over-saturated. Traffic is horrendous, parking is limited, schools are over-crowded."

"We have everything within walking distance; movie theater, skating rink, pet store, library, ice cream shop, restaurants, a great ball field. This is why our residents have chosen to live here for that small community feel. We do not need anymore apartments."

"I grew up in [Anytown] and it is a charming village and should remain that way. The streets cannot handle the traffic that would be created from any further development."

"[E]nough is enough. Think about the tax paying homeowners and not the greedy developers."

There is the clear sense here of a valuable amenity, a "quaint," "lovely" village with "everything within walking distance" that has been subjected to competition from new residents.  Because I always prefer a helping of data with my anecdotes, I charted out all the "NIMBY" comments -- more than 80 of them in this case -- based on the concerns they raise in the chart below: 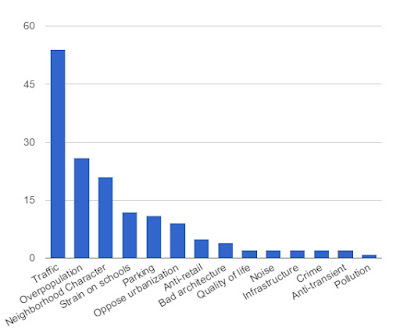 Increased car traffic is far and away the most mentioned concern, with overpopulation/overcrowding second, neighborhood character third, school overcrowding fourth and parking fifth.  Notably, there were no comments citing home values or privacy concerns.  One or two comments did refer obliquely to people deciding to sell in response to the arrival of apartments, but these were linked to changing neighborhood character (a less family-friendly environment) rather than falling neighborhood property values, and implied greater rather than lesser demand.

Again, I think this is strongly supportive of Chris' thesis.  The neighborhood in question is "under-zoned" relative to its capacity, particularly in light of transit access, and enjoys amenities that are underutilized.  The repeated references to traffic, strain on schools and overcrowding are simply different ways of stating opposition to more intensive use of neighborhood amenities by additional residents.  Issues such as increased noise, crime, anxiety over renter populations and similar concerns were cited much less often.

The tone of the comments also provides a window into NIMBY psychology.  Comments are rarely measured in their language and frequently employ hyperbole.  The majority are devoid of any optimism, and one gets the overriding sense that there can be no positive change, only a constant battle against further decline and decay.  This NIMBY mindset, pessimistic in the extreme, appears to be behind the despairing tone evident in much of the commentary.  It may be that these attitudes are most prevalent in those areas where upzoning would be most beneficial for precisely the reasons Chris mentions.

Overall, these sorts of findings suggest that addressing concerns over property values may have little impact in many cases of neighborhood opposition to densification.  Understanding what motivates this opposition will require looking closely and in good faith at the concerns that are raised.
Posted by Charlie Gardner at 12:49 PM