Fall and Rise of the "Euro Block"

In a recent post, Urban Kchoze's Simon Vallee discusses the traditional "Euro block," that characteristic urban form of European cities from the late 18th to the mid-20th century.  He makes the observation that although the earliest urban development in North American cities adhered somewhat closely to the European pattern, it gradually diverged over time, such that by the wave of industrial-era urbanization in the mid- and late-19th century, the form that apartment blocks took (where they were built at all) was quite different.

Since he focuses mainly on the process that produced these buildings, I wanted to instead examine the form of these various European and American block styles, looking at the particulars of design, density and scale, partly out of curiosity, and partly to see if it is possible to discern any design trends over time.  A good starting point for comparison is a typical Euro block, in this case a Berlin apartment block from the Gründerzeit era, showing the characteristic form that prevailed throughout many of the larger cities of Europe from the late 1700s to the mid 20th century.

I can't pretend to know the exact process that went into the construction of these mietskaserne, but in general, the focus seems to have been on providing for spacious but enclosed courtyards as part of an integrated, block-wide plan.  Although minimum courtyard sizes were established by German building laws in the late 1850s, these were regularly exceeded by the housing associations or cooperatives that built the structures.  Apartment buildings take interlocking forms, with each leaving a blank party wall for future neighbors to build against.  The apartments have good access to natural light, and there are no narrow airshafts.  They were unsanitary and massively overcrowded in the late 19th century, just as the tenements of Manhattan were, but seem to have avoided some of the worst design failings of the New York apartments.  Moreover, the density and integrated nature of the design, combined with the lack of residential-only zoning, was such that each block was capable of establishing small businesses to serve its own residential population.  The specifics are set out below. 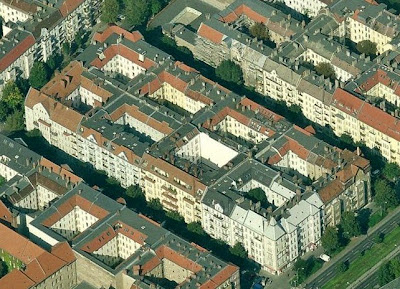 For contrast, let's examine a typical block of the same era from New York City, in this case from the Bushwick neighborhood of Brooklyn: 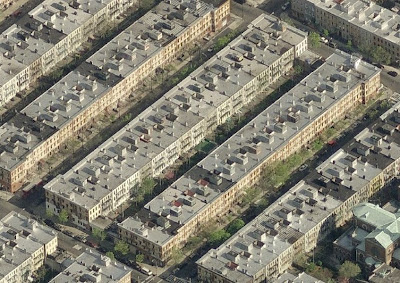 Although the Bushwick block is much lower density than the Berlin block due to a lesser number of stories, it actually has greater lot coverage and significantly inferior natural illumination.  As the building depth is so much greater than in the case of the Berlin block, the architect has punched airshafts (approx. 8'x13') at intervals down the middle of the row in order to avoid a large number of completely windowless rooms.  Although these airshafts collectively take up over 3,000 sq. ft., that space is inaccessible and unusable.  The long, narrow interior courtyard is sectioned off into small fenced parcels that appear to have little recreational value.

Overall, despite the lower density, the Bushwick block must feel denser and more cramped than the Berlin block due to lack of natural light and paucity of common space.  It is a design that cannot be scaled upwards, either, as much above three stories the airshafts will become useless for the lower floors.  This block design, despite its obvious flaws, was replicated many hundreds of times over Brooklyn and Queens.  Other common approaches included narrowing building depth, which further reduced F.A.R., or breaking up the block into duplexes and their variants, which again left a large amount of airshaft-like unusable space in between buildings.

New York's city planners were well aware of these issues in the late 19th century, as I've written about before, and attempted to address them through the "New Law" building mandates of 1901.  Included among these regulations were minimum dimensional requirements for light shafts of 24', a dimension larger than that set by German building codes, yet still much smaller than the typical Berlin courtyard of 80'x38'.  These dimensions appear to have been designed for purposes of admitting light, rather than for creating usable spaces. 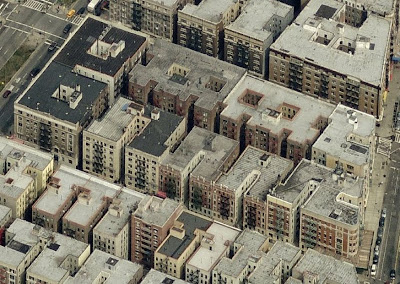 The result of these regulations is in some ways even worse than the Bushwick block.  The central courtyard space has shrunk to a narrow corridor which, while it might make a reasonably pleasant narrow street, is here relegated to being a concrete-surfaced no man's land.  Interior open space constituting 28% of the block area, more than in the Berlin block, has been entirely squandered.  This block represents the culmination of a half century of regulations purportedly intended to improve the arrangement of residential quarters, and yet the quality of mid-rise apartment design could hardly fall any lower.  Richard Plunz, in A History of Housing in New York, summarizes the efforts of New York architects and builders, as compared to those of Europe:


"In Europe by the turn of the century, the development of new prototypes for reduced [lot] coverage had reached a level of sophistication unknown in New York until the 1920s . . .  In all cases, the European efforts far surpassed the scale and quality of anything that could be found in New York."  History of Housing in New York, p. 138.

Plunz' assertion is a bold one, and could be quibbled with in the details, but one which seems essentially accurate.  Compared to even the mietskaserne, the sullen apartment blocks of Washington Heights and the Bronx inspired little affection and did not retain middle-class residents or entice new ones.  Following the failure of the New Law regulations to create blocks that rivaled the quality of even the average Euro block, New York planners and indeed the entire planning profession gradually abandoned the concept of the enclosed block, instead adopting either the garden apartment or the tower-in-the-park concept (the first such plan being drawn up in 1917, according to Plunz). Although both of these featured large quantities of landscaped space, very little of it was private and enclosed.

In most American cities, apartment blocks of either the European or New York types were rare, and apartment buildings outside central city areas tended to adopt garden apartment forms.  The dense industrial cities of the northeast, for instance,  accommodated virtually all of their population growth in the 1860-1920 period in cottages and three-deckers, or in slightly larger, but standalone, apartment buildings.  Oddly enough, the Euro block form was very well known and used in these cities at the time, but only for manufacturing plants, as shown in these old illustrations:

The suitability of this form for residential use was belatedly discovered some one hundred years later.  The Winchester Repeating Arms Factory, shown in an 1879 illustration above, is undergoing conversion to an apartment block that would not look out of place in contemporary Berlin.  Bridgeport itself did eventually discover the cooperative ownership form for apartment complexes using a somewhat similar design, but not until almost a century later.

Revival of the concept is not limited to loft conversions of former industrial facilities, as the form has lately begun to proliferate throughout the Sunbelt cities.  Simon notices this in his post, too, but I think the form-based similarities are worth exploring.  Below is an apartment "complex" in Dallas, Texas, that is representative of a type found throughout Sunbelt cities.  Even a glance at the overall layout immediately tells us that the form here is much closer to the 19th century Berlin block than to any of the New York examples shown previously: the building uses interior wings to define enclosed but spacious courtyards which serve recreational purposes. 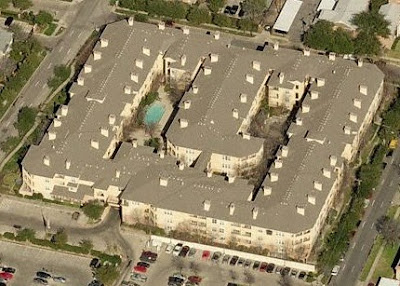 Very often, decked parking garages are incorporated within these buildings in the familiar "Texas doughnut" configuration, but using a ground level parking area, with courtyard placed over it, seems to also be popular.  Were the buildings made taller and somewhat narrower, as in Berlin, an even better result could be obtained, but this might not be as economical in light of modern construction mandates for fireproof construction above a certain number of stories.

Are there any editorial comments to make in closing?  The American experience with apartment-building seems to have been characterized by planning interventions that were about mitigating perceived shortcomings or excesses rather than pursuing any clear idea of good design.  The Euro block form, in the absence of large developers or cooperatives with access to capital and who are able to design entire blocks from scratch, relies on top-down and forward-looking coordination of a sort which was generally absent in 19th century American cities.  Its complete absence from the wealthy industrial cities of the northeast and midwest is conspicuous.  In spite of that, the Euro block, with its restrained density, generous interior spaces and focus on harmony and aesthetic unity, is a form of urbanism well-suited to American sensibilities.  Its rediscovery in the late 20th and early 20th shouldn't come as a great surprise.

Posted by Charlie Gardner at 11:28 PM