Rebranding the Alley: From Service Way to Narrow Street

I've devoted several posts to critiquing the way many contemporary developments have reintroduced the alley as a design feature in new developments.  Although the so-called alley generally handles all utilitarian functions in these developments, including automobile circulation, trash pick-up and even emergency access, it is almost invariably accompanied by wide fronting streets which serve little obvious purpose.  Due to the conception of these alleys as mere service paths, designers generally pay little attention to their aesthetics.

One California reader, however, has alerted me to his New Urbanist community in the town of Hercules which has taken a somewhat different approach.  Rather than including a freestanding rear garage, this development runs the houses straight back to the alley, storing cars in a first-floor, two-car garage.  The alley side is not an afterthought, but instead is given a dignified architectural treatment appropriate to its role as the primary functional entrance to the home: 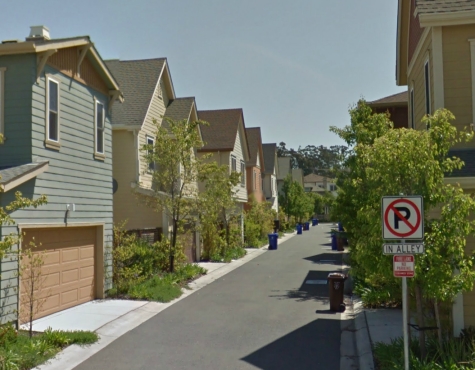 Objections are often raised that new narrow streets are impossible under today's regulatory regime of fire codes and inflexible functional classification schemes, but examples such as these seem to disprove that notion.  The paved area plus flanking concrete drainage channels is 20 feet wide, conforming with the right-of-way requirements of the International Fire Code and the National Fire Protection Association. Here's another example from nearby Richmond, California, again showing an "alley" behind fronting streets, but with attached dwellings: 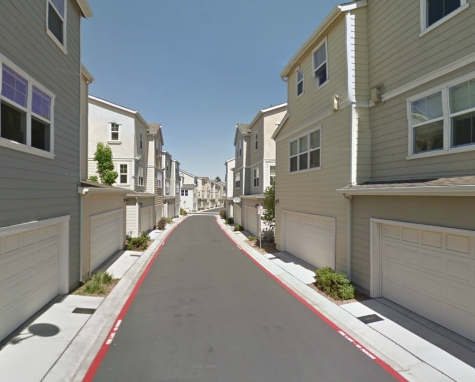 There is adequate room for a car to pass a stopped vehicle, should the need arise.  This should happen rarely, though, since as the street sign and painted red line show, parking is not permitted along these alleys.  Why should the city hand over a large portion of the public right of way for private car storage, after all?  And if the street is not to be used for car storage, why make it any wider than necessary?  Without on-street parking, fears of parking spillover due to new development, a frequent objection to infill densification, might dissolve.

Removing the fronting streets is not the obstacle it might seem, either.  As I wrote about last year, some new suburban developments have already adopted this design in its essentials, but with lingering confusion about how to designate the "front" and "back" of properties, and how to accommodate private outdoor space.  The resulting streetscapes are much less urban and appearance-wise far inferior to the Hercules development, which, regardless of any other failings, is helping to put the pieces in place for the conceptual transition between alley and narrow street.  The challenge of the wall of garage doors can be overcome by changing the parking configuration, lessening or eliminating parking requirements, through clever design or even by building a common underground garage.

These design changes alone, of course, are only one step among many others than are needed, including a focus on transit, a more realistic attitude toward accommodating non-residential uses, and  a city committed to properly integrating the street network with the city at large.  Even taken by themselves, however, the changes would presumably be welcome to both developers and municipalities, and have the potential to yield urban densities even using the single-family detached housing format.

Finally, one other Richmond-area development has in fact employed alley-style streets as the sole access routes for certain houses (shown below).  As a result, these paved ways – rebranded as "courts," rather than alleys – have individualized names, giving them the status of proper city streets: 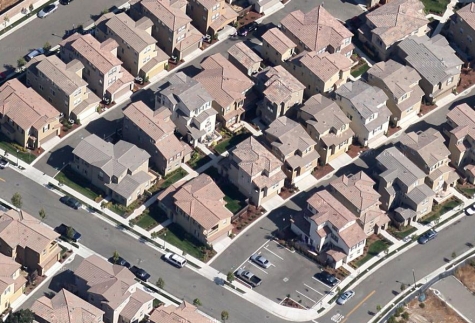 The street view along one of these courts, again showing something more than a purely utilitarian architectural treatment (note the balcony at left): 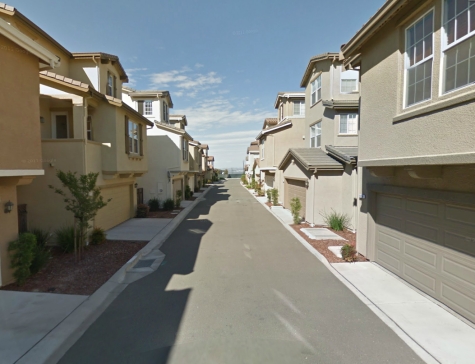 There is still a reluctance to consider these narrow streets as the territory of pedestrians as well as cars, even though there is undoubtedly very little traffic.  Instead, a pedestrian pathway runs along the opposite side of the houses on the right.  Still, the design breakthrough of separating these alleys from total dependance on corresponding fronting streets, and the conceptual breakthrough of giving the alleys official names, are noteworthy achievements here.