I've put together three additional charts, correlating per capita highways, heavy rail and light rail with commuting transit share for an expanded list of thirty American cities, in the hope that these statistics might add to and shed light on the results from the previous post.  Although the first two charts are probably in line with most expectations, the third, for light rail, may come as somewhat of a surprise. 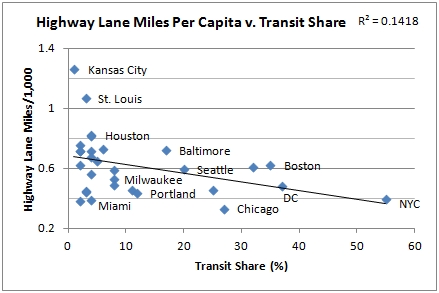 As might be expected, there is a correlation between decreasing freeway lane miles and increasing transit modal share, but it is not strong.  Eliminate the three outliers of Kansas City, St. Louis and New York, and even that modest correlation is cut in half.

By contrast, the correlation between transit share and kilometers of heavy rail is much more robust.  For this chart, only urban heavy rail systems, such as subways, were included. Regional commuter rail, such as New York's Long Island Railroad or San Diego's Coaster line, is excluded to keep the comparison consistent: 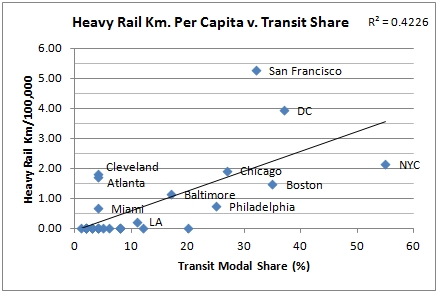 Eliminating the cities with no heavy rail from the sample reduces the correlation to an R2 value of .17.

Last, and perhaps most surprising, are the light rail numbers.  Regardless of whether cities with no light rail are included, there is a statistically insignificant (but consistently negative) correlation between light rail kilometers per capita and transit share.  The United States seems to be flush with cities with substantial light rail networks and low transit modal share.  The exceptions are the cities which also have heavy rail networks (SF, Philadelphia and Boston).  Three other heavy hitters have no light rail, although all had systems in the past (NYC, DC and Chicago): 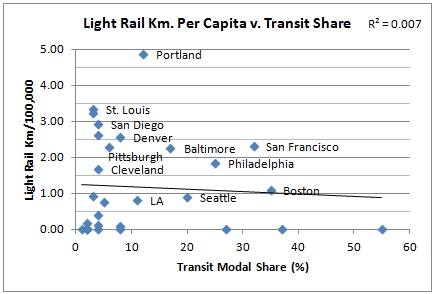 Two cities with no or essentially no light rail at all, Milwaukee and Detroit, surpass numerous other cities with extensive networks.  Portland's extensive system, more than five times larger than Seattle's on a per capita basis, has only earned it 60 percent of that city's modal share (arguably, Seattle should be given an even lower value on this chart, as the King County branch of its light rail system opened more than halfway through 2009, the year measured by the ACS in computing modal share data).

Are there any further points to glean here?  Certainly no correlation shown here approaches the correlation of urban population density to modal share that I provided in the previous post, which remains by far the strongest correlate of transit use. The role of bus networks is obviously huge, but I wasn't able to find a single metric useful in making cross comparisons that was available for all bus operators (routes per capita is a possibility, but there is no way of knowing the length of these routes in most cases.  I might add it in later anyways, if I can locate the data for it). Commuter rail would introduce more complexities.

Chart data are below.  Numbers in the last three columns show miles and kilometers per capita (per 1,000 or 100,000).  Note that modal share data are for cities, rather than the greater urban areas from which population figures used to compute per capita highway and rail figures are drawn, but are more closely tied to the types of urban transit systems I have included.  You are welcome to reuse this information, but no guarantee of accuracy is offered.  Contact me if you'd like the excel file. 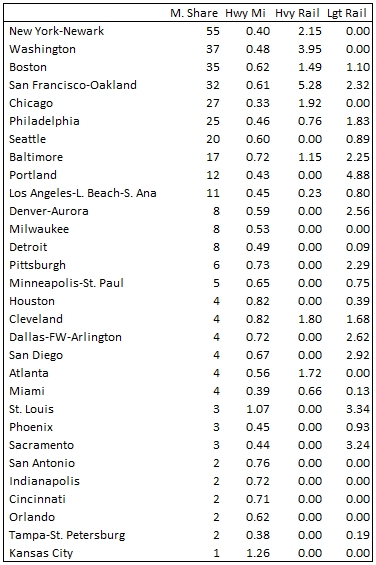 Related posts:
Chris Bradford: The association between density and mode of commute. Chris finds that standard density is weakly predictive of transit modal share, but weighted, or perceived, density is strongly correlated with it.
Laurence Aurbach: Fun with Density and Transit Statistics.

Posted by Charlie Gardner at 7:37 PM