Commutes, Tradeoffs and the Limits of Urban Growth 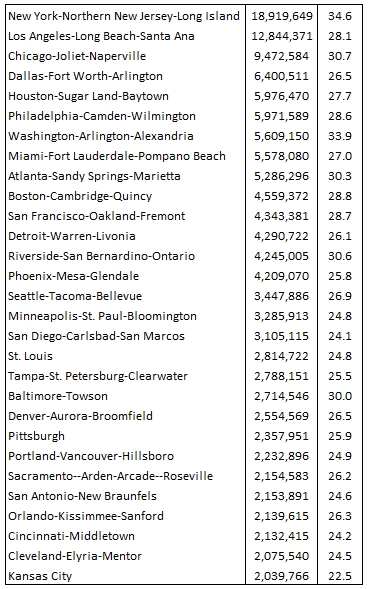 Although population is strongly correlated with commuting time, particularly when all metro areas over population one million are included in the sample, the differences are surprisingly small.  Orlando, with an urbanized area of only 600 square miles, has a mean commute just twelve seconds shorter than Dallas, which covers 1,780 square miles, although both cities have comparable densities, employment centralization and highway miles per capita.

The conventional explanation for this phenomenon, as one 1997 study puts it, is that "individuals and firms mutually co-locate in response to congestion costs, and thus reshape those costs."  Implicit in this "tradeoff" theory is that, for most people, commutes beyond a certain length of time are undesirable despite any other advantages that might be gained from the location (e.g. housing cost, school quality, taxation level, crime), or else we should see commute lengths increase at a faster rate relative to population.

The data suggests that maximum mean travel time is somewhere slightly over 30 minutes, as indicated by the outlier example of New York, where most residents of the metro area apparently prefer to pay very high prices for housing rather than relocate to far cheaper, but more distant locales (such as Dutchess County or the northern Philadelphia suburbs). The 30-minute figure has been noticed before by transportation planners.

What do these constraints suggest for the urban form of America's cities, if anything?  The map below shows the commute from a new residential development in Katy, Texas, to Houston's central business district, which is measured by Google maps at 44 minutes in optimal traffic conditions (Uptown Houston is only a slightly closer 39 minutes).  At distances like this, with a diminishing number of potential purchasers willing to undertake such long commutes to major job centers, faster transit virtually out of the question, and any new edge city employment clusters unlikely to contribute a significant proportion of metro area jobs, one wonders how much longer outward urban expansion can continue at its current rate. 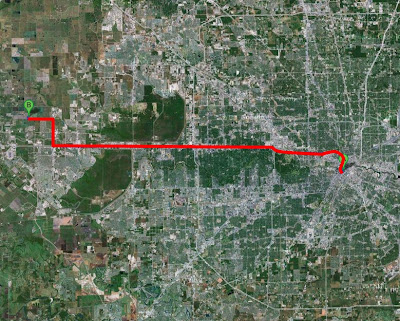 If the theory that commuting time preferences are more or less universal is true, we should by now expect to see a considerable refocusing of residential development in and around Houston's employment centers (bearing in mind that less than 1 in 5 Houston commuters currently has a commute of 45 minutes or more, although it's unclear how many of these are "super-commuters" – those who travel to the city once or twice per week and return on weekends – of which Houston has a nation-leading proportion according to one study).  As Chris Bradford reported back in March, this is precisely what is happening.  Thousands of new units are under construction in core neighborhoods, yet demand is so high that prices are soaring anyways. The study quoted earlier puts it succinctly:


"[A]t the metropolitan level, average density is principally a surrogate for city size. ... Thus densification, like polycentricity, is primarily a market response to contain or reduce otherwise high interaction costs found as cities increase in population ... rather than a cause of those travel times."

This theory doesn't imply that outwards expansion will come to a screeching halt once some magical distance from the center is reached, but that the balance of new construction will attempt to shift to the core as commutes from fringe areas begin to significantly exceed 30 minutes. For those despairing of an end to suburban sprawl, this may provide a glimmer of hope.  However, smaller cities with abundant land for expansion – for instance, Indianapolis, San Antonio or Oklahama City – ought to see comparatively less movement back toward the center, and that is reflected in the 2010 Census data (exceptions will certainly exist, though, due to other factors such as geography, demographics, transportation investments and city regulations).

None of this is exactly earth-shattering stuff, but in terms of looking at big picture issues for long-term urban growth, the importance of time preferences shouldn't be overlooked.

Other reading:
--Old but still relevant: Housing and the Journey to Work in U.S. Cities (Observing that the shift to auto commuting was a rational choice during the 1960-1990 period, and accounted for declines in average commuting times in spite of increasing commuting distances.  However, as of 2010, average commutes are up in all major cities as compared to 1990, in many cases significantly, showing the diminishing returns of this strategy over time).
--Basics on housing patterns and highway building: Suburbanization and Transportation in the Monocentric Model
--More spatial patterns: Traffic and Sprawl: When Jobs Suburbanize, Whither the Commute? (Echoing the finding that job decentralization is associated with shorter commutes, but observing that it cannot halt or reverse the trend of increasing average commutes as due to overall urban growth).
Posted by Charlie Gardner at 9:00 AM