Density and Transit: Some Numbers

Note: Updated 5/29 with an expanded list of cities.  This has slightly weakened each of the correlations.

I've posted on density-related issues several times, including the relationship between height and density, building footprints and density, and street width and density, but I haven't said much about density and transit use.  Cap'n Transit has, though, recently writing a series of posts skeptical of the notion that certain areas "don't have the population density to support transit."

I think the Cap'n is right that this statement, as it's phrased, isn't all that helpful in clarifying the issue.  Instead, in all or virtually all cities, the presence of public transit is a matter of political will – in low-density Arlington, TX, the largest American city without public transportation, only political opposition has stood in the way of the establishment of a bus network. Whether the system would be profitable is presumably only one of several factors in the debate.  Below some point of total population or density, we might be confident in saying the economics would forbid any political consideration of public transportation, but that line is not a bright one.  Private mass transit is more directly tied to profitability, but this in turn is affected by political choices, both toward the private operators themselves and to competing forms of transit (which, as Cap'n has pointed out, includes cars).

A more interesting question, to me, is whether we can say anything more broadly about the relationship between density, both of population and jobs, and transit modal share. The chart I've put together below plots the residential density of a group of the largest American cities, measured by urban area, against commuting transit modal share, using data from the 2009 ACS (raw data is further down): 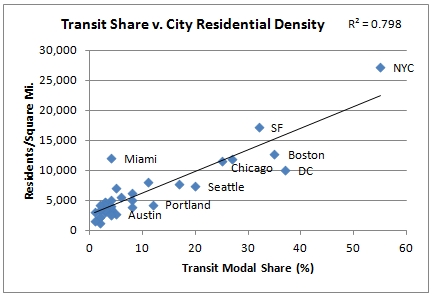 While there are a few transit overachievers, notably Portland, Seattle, Boston and Washington D.C., the correlation is overall very strong.  No city with an overall density of less than 4,000 per square mile, and there are many, has broken a 10 percent commuting modal share.  The most notable outlier, Miami, may possibly be explained by examining its CBD employment density and job concentration in the charts below.

Here is the same exercise, but using the employment density of each city's central business district (in thousands per square mile) in place of residential density: 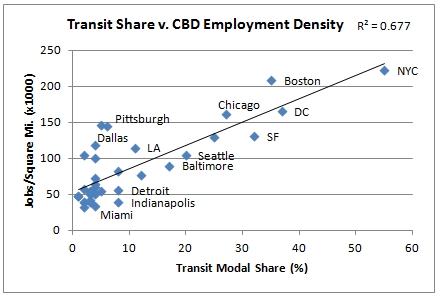 A similar correlation is there, but it is not quite as strong.  Cities can build equally dense downtown employment districts with almost any level of transit share – cf. Dallas (4), Los Angeles (11), Philadelphia (25) and San Francisco (32).  Again, however, those cities with lower employment densities have difficulty attaining higher mode shares (the cutoff point appears to be around 100,000 jobs per square mi.).


Finally, a comparison substituting employment centralization (proportion of all jobs in the metro area located in the CBD) for employment density: 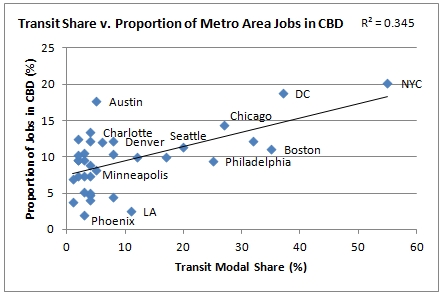 The correlation is by far the weakest here – a dense, polycentric city can achieve reasonably transit high modal share – but highly monocentric cities appear to have an easier time boosting transit use. Low density monocentric cities fare poorly. (Interestingly, Washington DC, much criticized for the economic effects of its height limit, which has allegedly driven jobs outward to edge cities such as Tyson's Corner, is the second most job-centralized of large American cities. High-rise Dallas and Atlanta, by contrast, are heavily decentralized).

The lesson here seems to be that, when it comes to increasing the share of city residents using transit residential density is a key, if not the key, factor.  It may also increase the financial viability of the transit service, although it is possible that mode share and transit expenses are also closely correlated.  That, and some other possible comparisons, will have to wait for another post.

Posted by Charlie Gardner at 5:13 PM