A Walk Through Occupied NY

Update 11/15: As you've read by now, the settlement shown here was removed last night by the NYPD at the order of the mayor, who was quoted only a week ago stating his lack of objection to the new, higher quality tents that had begun arriving (see end of post).  Since the protestors apparently are barred from setting up new tents, it looks as though this will be the first and last post on this intriguing subject.

With the Washington Post running an article on the "do-it-yourself urbanism" of Occupy D.C.'s encampment, and Steve Stofka observing the emergent patterns evident in Occupy Philadelphia, I decided yesterday to hop on the Lexington Avenue Line down to the Fulton Street stop, just a block or so away from Zuccotti Park, the site of Occupy Wall Street, to see this nearly two-month old settlement up close.  I wasn't alone: a number of foreign tourists, maps and cameras in hand, were also gathered around what has apparently become a major attraction of Lower Manhattan.

Although some earlier photos I'd seen gave the impression of a scattering of tents, tables and ad-hoc meeting places, the park has evolved quickly into a very dense settlement with almost every square foot put to use, a consequence, in part, of the limited space within the granite-walled boundaries of the park, an infill process mimicking the growth of cities within medieval fortifications: 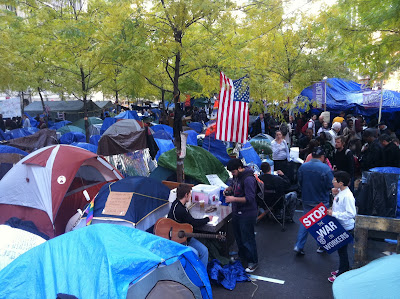 The path at right is the "Main Street" of the settlement, now lined with a mix of the tables of various groups and organizations, from anarchists to pacifists, as well as a large cafeteria, a library, and even some retailers with large, walk-in tents: 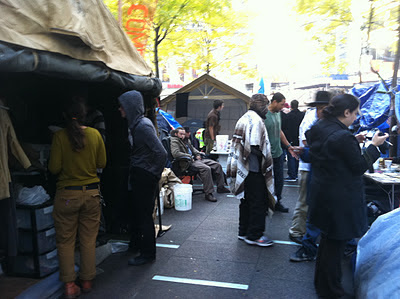 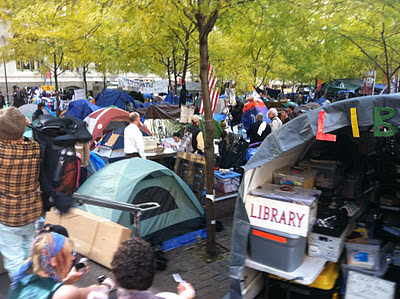 The path is generally six feet wide, broadening to eight or so in places.  No one brings in so much as a bike. The "residential" streets, running off this central way, are even narrower, some a couple feet wide, others leaving just enough space to step between the tents: 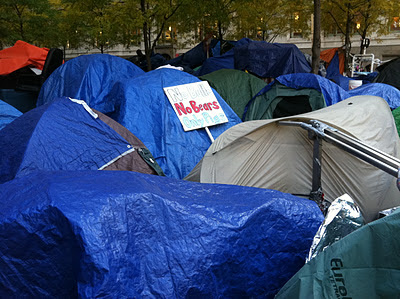 The police, as far as I could tell, stayed out of the settlement entirely, keeping to the sidewalks around the periphery.  Nor has there been a sign, at least since last month, of any imminent plans for eviction from either the city or the owner of the park (which is by law required to be open to the public round the clock).  The official stance, it is rumored, is to wait for winter cold to disperse the protestors.

This assumes that the settlement has no capacity to adapt or improve from the current mish-mash of tarps and L.L. Bean summer camping tents – but is this place more analogous to a Soweto or a Rocinha?  I didn't distinctly notice it during my walkthrough, but the photos show the evidence: look closely at the top left of the first photo and you'll notice a pair of large green tents, the first of many scheduled to arrive shortly, and which have been cleared with the city:

"[The OWS members'] newest plan to install 27 military-grade tents designed to stave off freezing temperatures and precipitation, which they began to bring to reality Tuesday, is kosher with the city, Bloomberg said during a Q&A session after an unrelated press conference in Hell's Kitchen Monday."

For a supposedly rudderless movement, "OWS" seems to have set things in rapid motion at Zuccotti Park, although there would be some irony in the settlement coming to outwardly resemble a military barracks.  I'll need to check back in a week or two to see how things have changed, but by the looks of things no one's going anywhere anytime soon.

One last thing: population density.  As best I can tell, for this settlement, it is approximately 150,000 per square mile.
Posted by Charlie Gardner at 7:00 AM