In the comments to last Monday's post, several commenters suggested that the example I'd chosen, J. Henry Hale Homes in Nashville, was not representative of the design quality of many Hope VI projects.  For the sake of balance, I've put together a series of aerial and street-level images of each of several projects chosen from a variety of locations.  Rather than editorializing, I present them accompanied by a short statement from their planners or from other relevant sources to let you judge for yourself the merits or shortcomings of each of the projects (click on the images to enlarge): 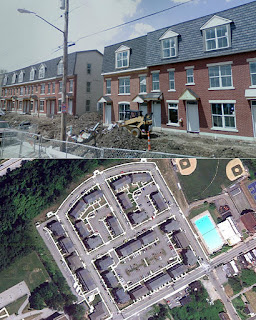 "Through the community-driven design process, the planners learned of the residents’ interest in maintaining the look of the existing housing stock. It was important that the new units fit in the context of the neighborhood. Consequently, the design team spent much of its time in the surrounding neighborhood documenting existing housing types and architectural styles. ... Each rowhouse, including the rental townhouse flat units, has a front door that opens up onto the street, providing residents a sense of ownership and a direct connection to the community. ... Resident surface parking lots, accessible by driveways, were situated in the rear of the housing units. Small setbacks of the houses enabled the planners to incorporate landscaping into the plan." -Project Summary 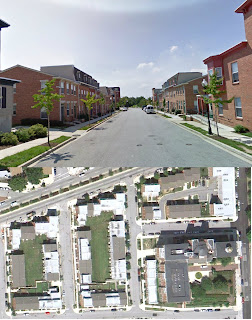 "The final master plan for the Broadway Overlook was more human in scale than the former Broadway Homes and oriented to pedestrians instead of automobiles. Parking is either on-street or in the rear of the units. Not all of the units have dedicated parking, but the steep topography of the site made it possible to place some of the resident parking beneath the new units, to be accessed from the rear. Although the master plan worked with the existing street grid, it incorporated two new streets to facilitate greater density.  These streets were designed to be one-way with on-street parking to help buffer pedestrians from direct traffic flow, therefore making it a more pleasant and safe streetcrossing experience. Like the surrounding community, the townhomes borrow from the Federal and Italianate architectural styles and consist of single-family and two-family dwellings that range in height from two to four stories." -Project Summary
Centennial Place, Atlanta 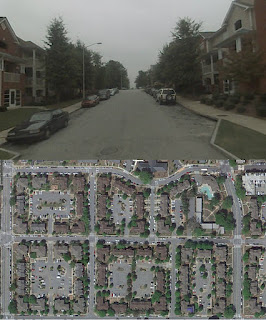 "Over 900 families live in new garden apartments and townhomes. Some families make a few thousand dollars a year and some make more than $150,000. But you won’t know which by looking at their housing units. They live side by side in an attractive neighborhood of tree-lined streets. Two swimming pools and a fitness center in the development, and a new YMCA nearby, provide recreational opportunities. New commercial development is underway – being built with private investment." -Development Description
Flag House Courts, Baltimore 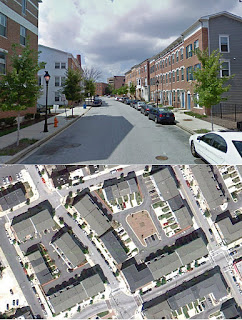 "Torti Gallas and Partners responded to the special challenges of this revitalization project with sensitive solutions. Rental, homeownership, and live-work units are designed with a consistent esthetic treatment that dissolves the stereotypes surrounding public housing. Housing density is reduced, allowing the introduction of planned open spaces. Blighted structures are demolished to create a rejuvenated environment. Safety and security are intrinsically planned into the neighborhood, and units are designed so that living areas face streets and public spaces. Creative plans fit comfortable units within the existing narrow lot widths." -Project Summary
High Point, Seattle 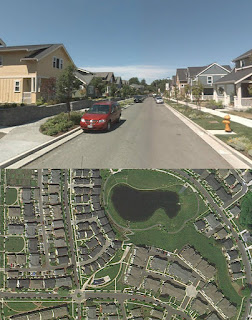 "By the end of the decade, High Point will have nearly 1,700 new affordable and market-rate units across its 120 acres. Most homes will have private yards and porches. They will sit on safe streets with controlled traffic, and will show great variety in architecture, with character and styles on each block. ... To maintain the green, garden-like feel, the plan designated over 20 acres of land for parks, open spaces, and playgrounds. A four-acre, central park will be at the heart of the community. Another park features a large pond and a jogging trail, and several other community and pocket parks are scattered throughout High Point.  Even planting strips along streets will be greener and wider than elsewhere in Seattle. The plan triples the number of previously existing trees." -Redevelopment Plan
Martin Luther King Plaza, Philadelphia 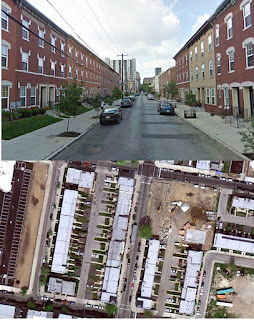 "Significantly, new housing is equally divided between on-site reconstruction and off-site renovation and infill. Long term sustainability of the reconstructed project will be assured by eliminating blight and creating stability in the broader community.

One key to the on-site master plan is the creation of a new residential square founded in the tradition of neighborhood-making established by William Penn, founder of Philadelphia. This new open space will be a focus for the broader Hawthorne neighborhood and will marry new and renovated housing, retail with residential above, and a host of local institutions, including a new daycare and community center, a local church and an existing elementary school. The architecture of the new units includes a diverse set of types modeled on traditional patterns of Philadelphia neighborhoods." -Project Summary
Mechanicsville Commons, Knoxville 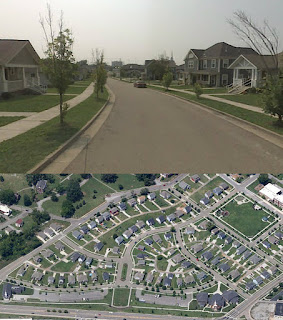 Existing houses in the neighborhood reflect the architectural styles that were popular in that era, primarily Victorian cottages and Craftsman bungalows. The house designs created for Mechanicsville Commons and for infill in the adjacent neighborhood respect these architectural traditions, incorporating elements from them – deep front porches, Victorian fretwork, and Craftsman brackets – to enrich the facades. The houses are painted in rich colors that give distinct personality to each house and create a lively streetscape. -Architect's Summary                      "As a minimum requirement, all new residential structures should have seeded lawns around the entire house and foundation plantings along their front facades. Landscape plantings and treatment help to define the mood for the residence as well as that of the entire neighborhood. ... In addition to the general landscape guidelines, one small ornamental tree shall be planted in the front yard; a minimum of one large ornamental or canopy tree shall be planted elsewhere on the lot." -Design Guidelines
New Columbia, Portland 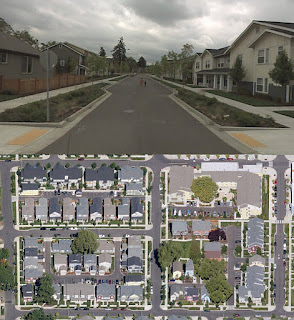 "Portland doesn't really have food deserts ... . But it has patches such as New Columbia, a community of 3,000 mostly low-income residents where people must travel long distances to get to groceries." -Portland Tribune, March 10, 2011
North Beach Place, San Francisco 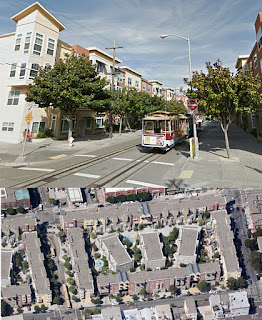 "North Beach Place is one of the largest mixed income, mixed-use complexes in California, comprising a 341-unit development; 20,000 square feet of commercial space, including 3,000 square feet of incubator space for resident entrepreneurs; and a childcare/community center. Located in San Francisco’s popular North Beach area, with proximity to both transportation and employment, this complex is a model for transit-oriented urban infill developments.  ..." -Builder's Summary 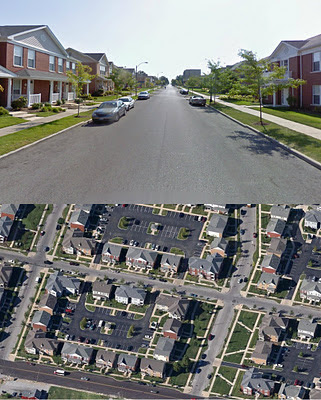 
The developer's website does not describe the design approach.  However, this project recently won LEED-ND certification: