A Tale of Two Densities

Apartments, Rowhouses and the Spatial Logic of Narrow Streets

In Hoboken, New Jersey, the fourth densest incorporated place in the United States, there is a two-block stretch between 6th and 7th Streets where the "hypertrophic" fabric of the great majority of the city, consisting of walk-up apartments and large brownstones on wide streets, abruptly gives way to a series of smaller rowhouses on narrow streets cut through a single larger block. 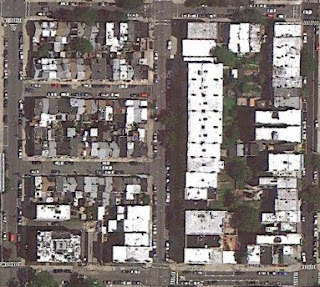 The five-story brick apartments lining the block to the right are the so-called tenements of the type which Jacob Riis wrote about and which menaced the Little House in the animated Disney film of the same name.  They are emblematic of New York's urban growth in the 19th century and are still abundant throughout the city. Occasionally mixed among them, up large and ornate stairways, are brownstone townhouses with garden apartments.

To the left, the standard Hoboken city block has been subdivided into three smaller blocks by use of two narrow streets along which, with no setback, are built a series of modest two- and three-story rowhouses more typical of Philadelphia or Baltimore than the New York area.  The apartments across the street tower over these small houses, certainly giving the visual impression of much greater population density:

The stark juxtaposition of these characteristic urban forms virtually begs a comparison of the densities in play here.  Since population figures aren't available, I use the objective substitute of bedrooms instead, counting northwards from where the rowhouses begin:

So, despite the height advantage of the apartments, the rowhouses actually contain a slightly greater number of bedrooms, due mainly to 1) the spatial efficiencies of having multiple bedrooms per unit, compared to one bedroom units, and 2) the narrow streets, which by subdividing the block more than double the number of street-fronting rowhouses which can be accommodated in the same space.  Adding street frontage has the potential to add both value and density to the land, but is dependent on the use of narrow streets lest the benefits be canceled out by the loss of space to new rights-of-way.

Consider also that while 3 bedroom units are capable of hosting both families and individuals (as roommates), the typical American family will find it intolerable to live in a studio or one bedroom apartment as their immigrant forebears did, no matter what urban amenities are nearby.  Given that family households, averaging 3.2 persons each, continue to outnumber non-family households more than 2-1 in the United States, the rowhouses are better suited to contemporary American demographics and living preferences.

One option for the apartments, rather than building higher, would be to simply combine one-bedroom units on each floor to create larger 2 or 3 bedroom units (resulting in a decrease in the number of units, but an increase in the number of bedrooms*).  An older New York Times article describes this process, the economics indicating a severe mismatch between supply and demand for larger apartments in New York:

Broker after broker offers stories of combinations that typically increased value by 30 percent to 50 percent, relating the details as if they were prospectors in a new gold rush. In one instance, a mortgage broker says, a client put together five studios at a cost of $1.1 million that when renovated were appraised for $2.7 million."

The pattern seems to hold true in Hoboken, as well, given that a renovated rowhouse on the block pictured recently sold for $727,000,  far above Hoboken's mean of $417,000.

As for overall population density, a neighborhood built of such rowhouses could potentially exceed 50,000 people per square mile, assuming one person per bedroom.  This is a density comparable to Paris and higher than Brooklyn or the Bronx.  If higher densities are possible, they may not necessarily be desirable for various reasons relating to infrastructure, transportation and overall crowding.  All this is not to advocate for a particular type of urban form, though, but as one more way to think about the issue of street width, building height and density.

*This has implications for the usefulness of the "units/acre" metric for density, which will tend to reward neighborhoods of one-bedroom units while penalizing those with more multi-bedroom units.

Related Posts:
Glazer v. Glaeser on Density
Skyscrapers, Height and Density
Can New York Build Its Way Up To Affordability?
More On Density
Posted by Charlie Gardner at 10:43 AM