Walmart has been in the news more than usual of late, with the announcement that it was closing 269 of its stores as well as backing out of building two stores in lower-income areas of Washington, D.C. Add this to Walmart's stock price decline of nearly 30% during 2015, and the picture begins to look somewhat bleak.  Although Walmart's financial prospects for the future are an interesting topic, it's the chain's position within urban environments that has been relatively little explored.

To set the context, it's crucial to note that Walmart has become in essence a bloated grocery chain, with 56% of its sales coming from groceries.  The growth in the grocery sector has been achieved in spite of the fact that Walmart earns by far the lowest customer satisfaction rating for its supermarket offerings of any major chain.  Moreover, the grocery business is more localized then the variety store
business. According to one recent study on the market effect of Walmart on the supermarket business:


"We find that Wal-Mart’s impact is highly localized, affecting firms only within a tight, two-mile radius of its location. Within this radius, the bulk of the impact falls on declining firms and mostly on the intensive margin. Entry of new firms is essentially unaffected. Moreover, the stores most damaged by Wal-Mart’s entry are the outlets of larger chains. This suggests that Wal-Mart’s expansion into groceries is quite distinct from its earlier experience in the discount industry, where the primary casualties were small chains and sole proprietorships that were forced to exit the market."

It seems that, for grocery purchases, most consumers are unwilling to undertake longer journeys than necessary even for somewhat lower prices.  Walmart's use of the "Supercenter" business model, however, means that it is impossible extend those two-mile radii over an entire metro area.  Moreover, the dependency on low land prices for these stores means that Walmart is often absent from entire central areas of cities.

In San Antonio, for example, there is not a single Walmart establishment in the central 50 square miles of the city.  By contrast, local chains like H-E-B and independent groceries have the flexibility to open stores within central areas.  The abandonment of Walmart's "Express" stores with the recent closings seems to have spelled an end for an attempt to compete with these smaller urban groceries.
Further, these supermarket chains have been edging in on Walmart's own territory, with chains like Kroger beginning to stock clothing and a wider range of household items in their most recently opened stores.  The competition from Amazon has been widely reported on as well.

From an urbanist perspective, it's easy to cheer all this news and condemn these stores as destroyers of local business and magnets for the car-dependent, but does it need to be this way?  I'm not so sure.  The person who can find no redeeming qualities in big-box stores ignores a central fact of the modern US retailing industry, and to his or her peril.  If the conclusion is that these stores are incompatible with urbanism, then a large portion of the retail business will be relegated to the car-dominated realm.

Could we instead imagine, rather than a mall anchored by a big box store, a community supported by one of these same stores?  There is no need to imagine, as such spaces already exist.  In a suburb of Madrid, for example, here is a Carrefour hypermarket (the local equivalent of a Walmart or Target, at center) surrounded by a residential development and with no surface parking: 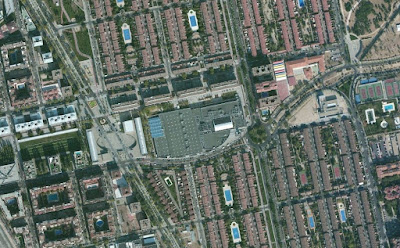 Although there is some underground parking, there is no surplus, and hundreds or thousands of surrounding residential units are within walking distance of the market.  Rather than detracting from small business, the pull of the market draws traffic down arteries past other businesses, providing them with needed foot traffic.  It should be noted there is rapid transit in close proximity as well, just barely visible in the lower left hand corner, and there is also a network of segregated bicycle paths.

There are historic precedents for this sort of urbanism in the form of the souk or bazaar, itself a sort of mall at the center of a walkable city, as well as the ancient Roman forum, which was often little more than temple in the middle of a two-story arcaded and enclosed shopping mall.  Some structures, such as Trajan's market in Rome, were in fact enclosed malls of shops and offices with an appearance very similar to those of today.

In a sense, the big box store offers unusual possibilities for walkability, and yet these have rarely if ever been taken advantage of within the United States.  Although there are some urban big box stores, the number of consciously planned "Walmart-oriented developments" appears to be close to zero (but wait -- see below).  Although there are many master-planned developments which incorporate retail, none are anywhere near as integrated as the above Spanish example.

The typical Walmart or Target is designed around the assumption that near 100% of customers want to arrive and will arrive by driving, but this is also a self-limiting business model that virtually eliminates quick or impulse shopping trips, or trips by those without access to a car.  It is easy to envision how a combination of higher quality and more local food shopping options plus online shopping could threaten to weaken these chains' business model.

A greenfield Walmart or Target truly integrated with its surroundings and embracing the possibilities of pedestrian access -- even if it required these companies to dabble in residential real estate -- could have tremendous upside.  Using a five-minute walkshed, a sufficient density could be obtained using some of the residential forms visible in the Phoenix image above to provide the store with a reasonable portion of the customer base needed to economically sustain it.  Moreover, it would just be a more pleasant environment in which to live.

The challenge of incorporating parking, which would still be needed in lesser amount, was resolved in the Madrid example by a partially underground lot.  An alternative, rarely explored, is to place parking on the roof of a building.  The added construction expense might be compensated for by surrounding residential land use.

This just in: just before I planned to publish this piece, Washington Business Journal published renderings of a newly-planned development in Washington DC that incorporates almost all the principles I discussed above: 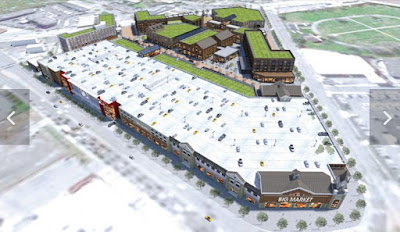 Note the parking on the roof and the use of what would have been the surface parking area for shops and residential on narrow streets (!) closely integrated with and with easy walking access to the "big box" store at lower right in the rendering.  I have to think that this is the way forward for the big box store.  This design format makes allowance for car trips but embraces walkability as well.  It will be interesting to see how this project fares and if the concept catches on in other cities.
Posted by Charlie Gardner at 7:02 AM