They Made a Desert and Called it a Park

A visit to a friend in Boston last week provided the perfect opportunity to take a walking tour of the downtown, the first time I'd been on foot in the area since the completion of the Big Dig a few years ago.

The "Rose Kennedy Greenway," the much-touted ground-level replacement for the elevated Central Artery, has to my surprise been roundly criticized: although it's not a shock to hear James Kunstler chime in, in the Globe and elsewhere it's been called a "barrier between neighborhoods," "waste land," a "glorified median strip," a "design disaster" and "a placeless desert" (the last of these inspiring the shameless paraphrase of Tacitus in the post title).  The evident failings of open space on such prominent display seem to have spurred constructive thinking on urban planning, rather than just hand-wringing, among writers of all stripes.

Crossing over from the North End toward City Hall, I snapped a photo of part of this park, a parcel which according to the Boston Zoning Code is designated as a "Recreation Open Space Subdistrict" (sounds fun!).  The plan also specifies a "major fountain to mask traffic noise" from the surrounding high-speed arterial roads and I-93 on-ramps, though no such fountain was either audible or visible.  Here's what $14.6 billion will buy after the digging's done: 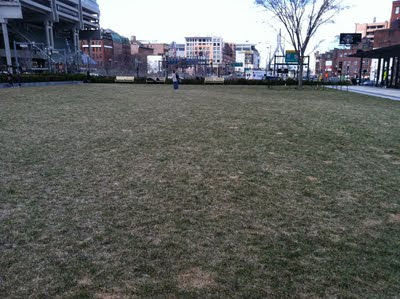 Throughout the project, the mantra that the Central Artery had severed the city, and that its burial underground* somehow would "knit the city back together" seemed oblivious to the fact that it was not the Artery which had severed the city, really, but the demolition of over 1,000 buildings for the Artery's right of way which had done so.  Removing the Artery simply revealed that pre-existing wound to the heart of the city, a gap so wide and poorly-defined even Baron Haussman might have thought it could use a little narrowing.  The aerial shots below show what previously existed in the path of this right of way, the top photo dating from 1947, and the lower from the present day, with the Greenway clearly visible in the center (the total demolition of the West End and Scollay Square, at lower left, are also clearly apparent): 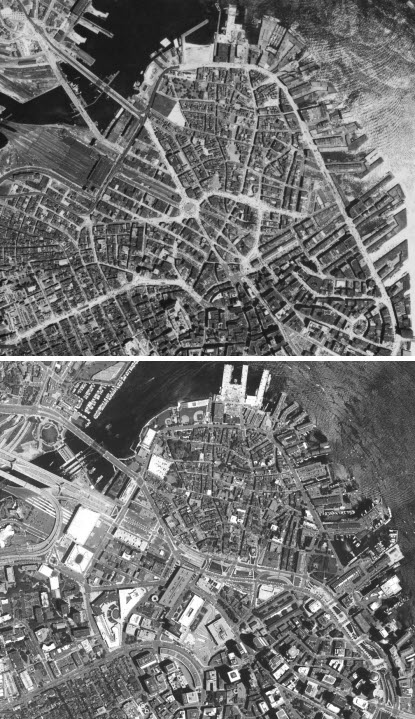 The story of how this all came to be stretches back three decades, and seems to relate to a crisis of the modern urban imagination.  As Globe architecture critic Robert Campbell put it:

"What should the Artery land be? Does it tell us something about ourselves as a society that, so far, no one has been able to come up with a vision that inspires consensus? ... Neither the people who govern us nor, probably, we the people ourselves have a clear idea what the public space of the 21st century should be. ..."

With no one able to agree on anything in particular, the environmentalists of the late 1980s stepped in to offer the compelling alternative of nothing, packaged under the name "open space," and obtained a requirement that 75% of the land above the buried highway be set aside for it.  The realization has only recently sunk in that even "nothing" must be paid for, as the conservancy tasked with maintaining the Greenway has now proposed taxing abutting property owners to raise funds, the largesse of Boston's citizens, already maintaining several very large parks in close proximity, apparently falling short.  Thus, land that, under private ownership, might have provided millions of dollars in tax revenue to the city, and hosted thousands of jobs and apartments, has become a money pit.

The missed opportunity is even more tragic given that one of the very few neighborhoods in the United States laid out in truly traditional fashion, the North End, with its narrow winding streets and attractive mid-rise architecture, sits right next to the Greenway.  The blank side walls of 19th century townhouses, their adjoining buildings demolished for the Artery in the 1950s, cry out to be extended southwards by new neighbors.  The elusive vision is right there, a reality, not a fantasy, yet somehow it escaped the attention of Boston's elected officials, planners, architects and the public itself.

On the day I visited, the North End was jammed with tourists snapping photos of the streets, students standing in long lines at pizza parlors, and many residents simply going about their daily business by foot.  The few on the Greenway were walking briskly either toward the North End or back the other way, and indeed, with such an extraordinary neighborhood so close by, the appeal of lying on a shade-less grass lawn between six lanes of roaring traffic loses any appeal it might have otherwise had.

Was there a sort of failure of the imagination here, an idea Nathan Lewis develops, that prevented and is preventing many Bostonians of the present day from really "seeing" the examples of good urbanism that are right in front of them, or thinking that they might be imitated?  I do not know, but the recent critiques, at least, do seem like a hopeful sign.


*Given the $15 billion price tag, I would have expected one of the alternative options to have been to simply remove the Central Artery without replacing it (see recent posts at the Infrastructurist here and here on freeway removal), yet I'm not able to find that this course of action, which probably would have cost less than $50 million, was ever considered at any point.

Posted by Charlie Gardner at 10:00 AM