A couple weeks ago I put up a post on Portland's grid, street widths and 19th century American city planning. With an apology in advance for all the statistics, I've put together a table to illustrate some of the numbers behind the grid form.

What the table shows in the first column is the amount of land, in acres, needed to provide equivalent amounts of building square footage for grids built with a variety of street widths and building heights, while always maintaining a 200x200 foot grid block (Portland's block dimensions) and 1:1 street width to height ratio (the assumption being that a benefit of wider rights-of-way is that buildings may rise taller without reducing the amount of natural light at street level).  For example, a city of two-story buildings on 20-foot streets would need to be 2.6 times as large as a city of ten-story buildings on 100-foot streets to contain the same amount of total built square footage.

The second column shows the amount of land, out of the total acres, that is occupied by the right-of-way in each scenario.  At the end of the chart I offer three examples of common American development forms for purposes of comparison. 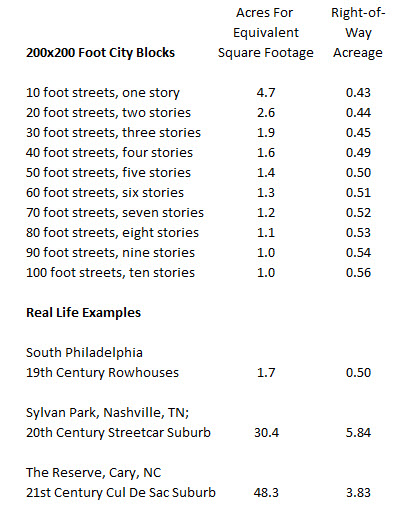 This is similar to Floor Area Ratio, in a way, but I thought it was more helpful as a way to visualize intensity of land use over larger areas.  Some of the results to me were fairly surprising.  I'll post a few more thoughts of my own on this later, but I'd be interested to hear some reactions.
(A few notes: the South Philadelphia neighborhood is essentially an area of 2, 3 and 4-story buildings set on 30-foot streets.  Sylvan Park is a typical gridded suburb of the early 20th century with wide streets and alleys behind each row of houses, inflating the amount devoted to roadway.  The Reserve is a randomly chosen example of a cul-de-sac neighborhood of houses approximately twice as large as those in Philadelphia or the modest bungalows of Sylvan Park, but I did not adjust on a per-unit basis.)
Posted by Charlie Gardner at 10:35 AM