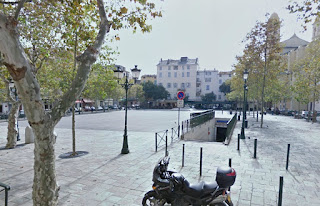 The intended goal would be a car-lite environment in which parking is permitted only to the extent of providing residents the limited option of a parking space that is neither cheap nor perfectly convenient, but which has a minimal effect on an otherwise pedestrian-centric urban environment.  Would a plan like this work in practice?  Would investors shy away?  Would the return on investment from a more intensively built downtown, relieved of the cost burden of expensive parking structures that occupy valuable real estate, outweigh the cost of the garages?  There are a lot of questions here, but there must be a better alternative to the parking-heavy urban infill currently appearing in many downtown areas.
Posted by Charlie Gardner at 6:49 PM