An awareness of the virtues of the narrow street seems to be growing on urbanist blogs and websites.  A recent commenter directed this blog to his excellent site, New World Economics, where a convincing (and entertaining) case is made for the crucial importance of "really narrow streets" to successful urbanism.  This is a new and distinct position from that of the New Urbanism, as it argues for a revival of traditional city forms, not simply those of 19th and early 20th century America.

As it happens, his is not the only voice advocating for narrow streets : David Yoon, a self-described "writer, designer, and urban planning geek," has created a website devoted to digitally shrinking the generously-proportioned roadways of Los Angeles.  Again, this does not appear to have grown out of a New Urbanist frame of thought, but out of first-person exposure to the form of the traditional city.

(Inspired by his examples, I attempted to do the same, with far inferior photo-editing skills, to nearby Washington Street in Norwalk, Connecticut, reducing it from its present dimensions to a scale closer to that of the pedestrian-only Nieuwendijk in Amsterdam by simply joining the sidewalks together): 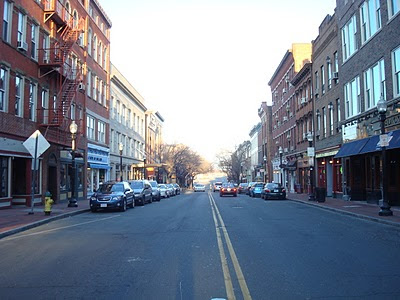 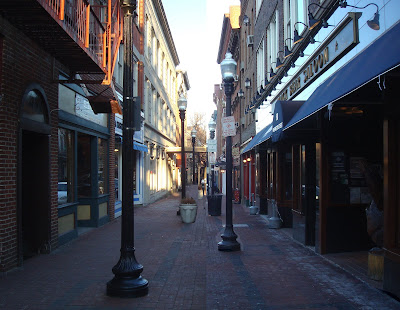 Other writing on narrow streets has appeared in the recent past: at Strong Towns, for instance, a declaration that "narrow, slower streets ... are a key component of a productive place," while Oakland Streets proclaims "the narrower, the better."  A handful of examples does not really make for a "movement," thus the quotation marks, but there is a discernible common idea here: that the most distinguishing characteristic of the traditional city and the most important determinant of the feel of any urban space is the width of its streets.
Again, this does not appear to be a rehash of New Urbanist thought: of The Smart Growth Manual's 148 principles of urban planning and design, not one is devoted to street narrowness as a desirable characteristic per se, while the examples of "slow flow," "local streets" (p. 8.10-8.11) show rights-of-way as wide or wider than heavily-used commercial thoroughfares in major European cities (e.g. here, here, or here) in order to accommodate vehicles.   A narrow streets approach, by contrast, rejects attempts to standardize street widths around the needs of the automobile, and sees the auto-unfriendly characteristics of very narrow streets as a feature, not a bug, of their design.
As this is just a quick attempt at a summary, any thoughts on this subject are welcome.
Posted by Charlie Gardner at 7:00 AM