Places That Aren't Car-free, But Should Be

The list of truly car-free urban settings in the world is surprisingly small, and for the United States, virtually non-existent outside of a few pedestrianized main streets. Tracy Gayton is leading a visionary effort to construct a completely car-free village in rural Maine according to traditional urbanist principles, in what would be the first such place of its kind in the United States, but I thought it might be worth pausing to consider what existing places would be best suited for a car-free retrofit.

In particular, I want to focus on those places in which the introduction or continuing presence of the automobile is seemingly irrational, yet the car appears in great numbers nonetheless. The incentives and motivations are simple: the first person to introduce a car to a given location obtains all the benefits of auto transport and suffers virtually none of the costs, which are instead imposed on others. Once a few cars are whizzing around, however, the collective advantage of a car-free city is lost, and a person who continues to refrain from purchasing a car only denies himself the benefits, as the costs have already been imposed on him by others.

Nathan Lewis talked about a similar phenomenon in the case of Juneau, the car-inaccessible Alaskan capital which has been built almost entirely around the needs of the automobile.  In the cases below, the towns and cities themselves are perfectly well-suited to pedestrian and/or bicycle transit, or nearly so, but have come to rely on motorized power to move human beings around anyways.  I'm sure readers can think of many others, but this is a start.

The City of Malé

Malé, the capital city of the Maldives, accommodates over 100,000 inhabitants on a tiny island of just two square miles, roughly the same size as Barcelona's Gothic Quarter. Almost entirely covered with row houses and mid-rise apartment buildings along narrow streets, the island should be a pedestrian's paradise. It is ideal for bicycling, too, since the climate is balmy year-round and the island is flat.  The longest possible walk from one point to another on the island is just over 20 minutes, and the walk from the ferry to the center of town is less than 10. Commutes of longer than 5 minutes are impossible unless one deliberately forgoes a bicycle.  If that weren't enough, the island has a bus system as well.

In spite of this geography, photographic evidence shows the streets of the city utterly clogged with motorbikes, cars and trucks. One photo even shows a large commercial building with two floors devoted to a motorbike dealership. A recent article depicts the city government struggling to impose a driving ban on the single day of the Muslim holiday of Eid-al-Fitr, suggesting at least indirectly an awareness of the effects of mass motoring on this island.

The situation of the nearby island of Hulhumalé, built up through expensive and laborious land reclamation, is even less forgivable since it has been deliberately planned.  The home page of the island's development corporation shows that the primary development strategy  is the construction of numerous wide and unattractive asphalt streets, which are prominently featured in photos on the website. This is confirmed by looking at an aerial view. A purpose of these streets, according to the developers, is to "reduce congestion."  The types of transportation modes that might cause this "congestion" are not mentioned, although by the dimensions of the streets the planners are clearly anticipating cars, and lots of them.  This on a flat tropical island which takes three minutes to bike across!  There is also a rigid system of Euclidean zoning in the works, with the purely residential areas located on the opposite side of the island from the shopping areas, with large green spaces, an academy and governmental buildings serving as a buffer between them. Perhaps this was to encourage residents to purchase cars and motorbikes lest the streets go unused. 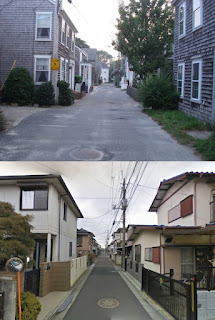 This choice is only natural, since the island of Nantucket was one of the last towns of any significance in the United States to retain a ban on cars, only relenting in 1918.  Although the island is far larger than Malé, population is concentrated in a single town approximately a mile by a mile and a half.  (A small settlement on the eastern end of the island was formerly served by a narrow gauge railway, and today has seasonal bus service.)  Similar to Malé, the terrain is largely flat and the weather is mild for much of the year.  Like a handful of other fishing and whaling villages of the Massachusetts shoreline, it lacks most of the telltale characteristics of the 19th century hypertrophic American city. Streets are narrow, a grid is absent, and setbacks are frequently small or non-existent. In form if not architecture it very much resembles Japanese urbanism, and is particularly well-suited for a pedestrian or bicycling culture. Most residents already get about by walking or on bike and the island has an extensive network of bike paths – why not take the next logical step and reclaim the island entirely for human beings?  (At right, Nantucket street vs. Tokyo street).


Although California's Santa Catalina Island does ban large vehicles, smaller cars and golf carts are permitted, and flood the streets of the tiny town of Avalon. Why this is necessary is not obvious.  From one end of the town to another is a five-minute walk and, according to Google maps, a two-minute bike ride.  The island also has a near-perfect climate with mild weather year-round and little rain in most months.  There are no other large settlements on the island. Where are all these people driving to?  (One could also ask: since the town was platted before the invention of the car, why were the streets designed to be 28 feet wide?)

This one is on a slightly larger scale. The idea of banning most, if not all, private cars from Manhattan is not new.  In 1961, the same year Jane Jacobs published The Death and Life of Great American Cities, writer Paul Goodman and his brother Percival authored an essay proposing to pedestrianize the majority of Manhattan's streets and avenues.  The crux of the Goodmans' argument was that private cars, in the manner in which they are currently used in Manhattan, "are simply not worth the nuisance they cause."  Ahead of their time, like Jacobs, the Goodmans also suggested a congestion charge to achieve some of the same benefits.

Whether one favors a bold approach like the Goodmans advocated, or a Jacobsian strategy of attrition of automobiles, the fact remains that New York has failed during the half century since in providing much new permanently car-free space.  Only the recent and partial pedestrianization of Times Square stands out.  Manhattan and New York as a whole continue to lack a single pedestrian shopping thoroughfare, such as Buenos Aires' Calle Florida, Copenhagen's Stroget, or Shanghai's Nanjing Road.  As the Auto-Free New York site has recently pointed out, the city failed to even maintain Roosevelt Island, New York's island within an island, as a carfree sanctuary, although it had been planned as one. In spite of these disappointments, it is difficult to think of a better and more appropriate setting for the creation of new pedestrian areas.

Bonus: A Car-free Town That Behaves Like It's Not

Mackinac Island, along with New York's Fire Island, is one of the best-known of America's genuinely car-free summer vacation spots.  Truly living up to its billing, the island does not even have motorized vehicles for mass transit, and instead relies on horse-drawn wagons and bicycles.

The design of parts of the town, though, is unmistakably 19th century American hypertrophic, with a wide main street that looks much like any other from its era.    Despite the lack of cars, there are raised sidewalks on each side of the street, and a blacktop-paved carriageway.  The street is still designed for the benefit of wheeled vehicles, not people on foot.  Subconsciously obeying these spatial cues, people walking about the town (see photo at right) appear to mostly remain on the sidewalks, while the street itself accommodates wheeled – although not motorized – traffic. So, although the town is in fact car-free, this has meant less than might be expected in terms of how people make use of public urban space.

The example of Mackinac Island shows that the absence of cars, alone, is not necessarily sufficient to create a pedestrian-friendly urban space.  Design matters too.
Posted by Charlie Gardner at 6:03 PM